He Came From The Egg

It has stood the test of time.  It's a tale of being the distinctly unusual member of a family.  There is rejection.  There is acceptance and ultimately great beauty. 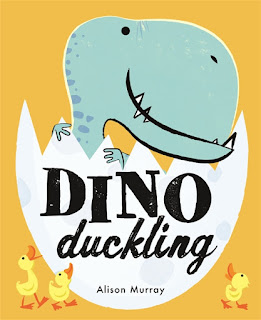 Hans Christian Andersen's The Ugly Duckling was written and published 174 years ago.  Dino Duckling (Orchard Books, October 2017, UK, Little, Brown And Company, January 9, 2018, US) written and illustrated by Alison Murray is a charming, original story based on this classic.  In this tale, from the beginning, this odd child out is nurtured.  This is how a heart is made whole. 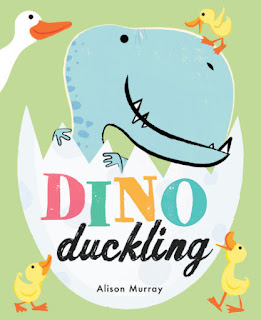 Even as an egg,
Dino Duckling was different.

At birth he was bigger than his duckling siblings, growing faster and much, much larger.  It was hard for him not to feel as though he did not belong but Mama Duck treated him with the same love and affection as her other babies.  As one season passed into the next, he was taught the same skills as the other three.  He also learned how to be a member of a family, sharing and caring for each other.

Even though one has a family who cherishes uniqueness, it's another thing for the world to view you in the same way.  This is hard for the particular individual who is the object of ridicule but Mama Duck was ever attentive and reassuring.

Spring into summer and summer into fall had the ducklings practicing their flying techniques with greater diligence.  No matter how he tried, Dino Duckling could not get himself airborne.  He realized with sadness his differences separated him from his family.  He was alone.

As the cold settled around him, he closed his eyes and he cried.  In his sorrow Dino Duckling forgot Mama Duck's words but she did not.  Heading south was first and foremost a family affair.

Sentence by sentence Alison Murray puts her own special spin on this well-known tale.  This mother embraces the special characteristics Dino Duckling exhibits.  The words different and difference are used repeatedly to supply a rhythm.  When the skills taught to the ducklings are listed and Dino Duckling is trying to fly, another type of cadence is created.  Mama Duck's familial sayings are poems that rhyme and which welcome audience participation.  Here is a passage.

"Big and wide,
sleek and slim,
we're a family
and we all fit in."

Different didn't make
any difference to her.

The bright pastel colors introduced on the opened book case are used throughout the title.  On the front of the United States cover all the family members are looking at Dino Duckling with devotion.  To the left, on the back, is a smaller interior scene with the three ducklings using Dino Duckling's back and tail like a slide into the pond.  Mama Duck watches proudly from the water.

On the opening and closing endpapers Alison Murray, in cream and pale blue, has portrayed four horizontal scenes of life with Mama Duck, the ducklings and Dino Duckling.  There is a notable difference between the two endpapers in keeping with the story's conclusion.  On the initial title page Dino Duckling's egg provides a place for the title text.  On the formal title and verso pages the creamy hue is the canvas for dinosaur and duckling tracks from left to right.  A tiny duckling is quacking up at Dino Duckling as he walks off the right.  All we see is his tail.

Rendered digitally and with screenprinting the illustrations printed on a heavier matte-finished paper spread across two pages, single pages and with several smaller pictures on a single page to emphasize pacing.  Most of the images are loosely framed by the background placed on the cream color.  With a few lines the expressions on the duckling's, Mama Duck's and Dino Duckling's faces convey each mood.

The settings Alison Murray depicts are made more realistic through the inclusion of details.  Blackbirds are nesting in the tree Dino Duckling breaks as he walks, squirrels scampering on the branches.  Schools of fish in the pond, a hovering dragonfly and reed-lined banks clearly define their home. As the seasons shift the sky, flowers and trees reflect those changes.

One of my many favorite illustrations spans across two pages.  There is a heavy use of hues of blue to represent the time of day and Dino Duckling's mood.  He is lying down along the length of the pond, eyes closes and crying.  Behind him tree trucks in black stretch skyward.  Three fall leaves tumble among the fresh falling snowflakes.  Patches of reeds frame Dino Duckling.  On the other bank two tiny mice watch him, concerned.

From the first time to the fifth time my fondness for Dino Duckling written and illustrated by Alison Murray continues to grow.  It is a joy to read aloud.  In fact, you will undoubtedly be asked to read it again and again.  Alison Murray has a gift for reaching her intended audience with a lovely blend of words and art.  I highly recommend this for your professional and personal collections.

To learn more about Alison Murray and her other work, please follow the link attached to her name to access her website.  I think you will enjoy watching her Merry Christmas Dino Duckling short drawing video.   She also has a resources link.
Posted by Xena's Mom at 2:49 AM