Between more than 230 million and sixty-five million years ago dinosaurs roamed this planet. (It's fairly difficult to wrap your thinking around a time frame in the millions of years.)  For them it was survival of the strongest and cleverest until a significant event caused them to become extinct.  Today many scientists believe they still live on in birds. 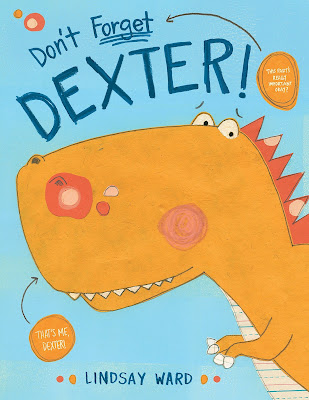 The fascination dinosaurs hold for student readers (and many adults) has never lessened.  Their size, power and capabilities continue to captivate.  To have a dinosaur as a pet or personal friend is the ultimate wish of many.  Don't Forget DEXTER! (Two Lions, January 1, 2018) written and illustrated by Lindsay Ward is about a dinosaur, a toy dinosaur, whose human, his best friend, has vanished.

Dexter T. Rexter, Dexter, has recently noticed Jack, his best buddy, is missing.  They were together at the doctor's office waiting for a checkup.  Dexter has been alone for a long time.

He asks us if we have seen Jack, even drawing a picture in his likeness with crayons.  When we don't recognize him (he's a stick figure), Dexter has a mini-meltdown.  The fish in the office aquarium and the receptionist have no answer for Dexter.

Dexter needs to take a new tactic so he sings their song.  When Jack doesn't appear in response to the music, he sings. . . er. . . shouts it again.  This dinosaur is starting to panic.  Then a horrible thought pops into his head.  He quickly dismisses it due to his outstanding physical qualities which he enumerates.  Like the worm worry is, another equally horrible thought zaps his mind.  Comparing himself to others is definitely not working until a voice calms him.

Determined to find Jack, Dexter attempts a daring escape.  His failure and where he falls has him lamenting all the things he won't be able to do with Jack.  A scream echos in the room.  Remembered.

To relate Dexter's predicament to us in his own voice allows author Lindsay Ward to add vital emotion to the story.  His dialogue is lively, genuine and exactly as one would think when left alone. Humor is supplied in the form of Dexter responding to implied replies from readers.  Here is a passage.

How can you NOT remember him?!
He was just here!
I'm sorry.  I didn't mean to shout.
Please don't go!

Who can resist the orange dinosaur on the pale blue background looking at them on the front of the matching dust jacket and book case?  We already know from the added speech balloons, Dexter will be speaking to us and making us part of his story.  On the other side of the yellow spine, Dexter is standing on a darker blue rug on the blue floor.  He is looking up and saying:

Hello?
Is anyone up
there?

The same orange used to color Dexter covers the opening and closing endpapers.  Similar lines are spoken by Dexter on the title page.  The verso and first pages are a two-page picture of the doctor's office with tiny Dexter wondering why he is minus his best friend, Jack.

Rendered in printmaking ink, colored pencil, and cut paper the images span two pages, single pages or a series of pictures to portray and enhance pacing.  The backgrounds vary between shades of blue, pale yellow, orange and cream.  Interest is peaked in the shift in perspective, placement of text, pointing arrows and descriptive speech balloons.  Dexter's eyebrows, eyes and mouth leave no doubt as to his current state of mind.

One of my many favorite illustrations is the one for the above cited text.  Dexter is standing on the blue rug on the blue floor right next to the low table with crayons and paper on top.  The point of view brings us close to him.  He is holding up the drawing of Jack.  Jack has lots of curly hair and he is drawn in red crayon; the same color as Dexter's spikes.  An arrow from the words

points to Jack.  All we see of Dexter is his hands holding the picture, the top portion of his head and his eyes.  You can tell his claws are made from children's writing paper which is a very welcoming illustrative touch.

No dinosaur story time will be complete without Don't Forget DEXTER! written and illustrated by Lindsay Ward.  Children will easily connect with the feeling of being alone or will recall those times when they have forgotten friends.  Get ready to read it with emotion and humor in your voice and expect requests for it to be read again.  You'll enjoy reading the closing flap where Lindsay discloses the inspiration for this book.

To learn more about Lindsay Ward and her other work, please follow the link attached to her name to access her website.  There is a short interview with Lindsay at The Children's Book Review.  Lindsay is the founder of Critter Lit, a place where you can get free one-time critiques.