The splendor of storytelling is one story always leads to another story.  Some part of a tale may trigger a past experience in the mind of the reader or listener.  Another item may light the spark of an entirely new variation on the same narrative.  Each of us are filled with stories, a reflection of our daily circumstances and the customs and cultures in which we live. 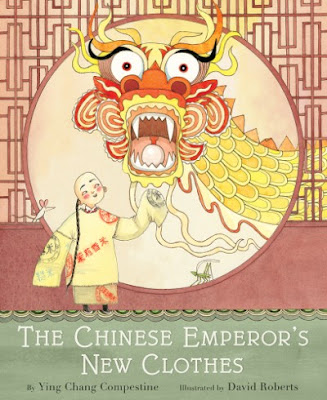 Elements from and references to fairy tales, a rock solid foundation, are found throughout other forms of literature.  The Chinese Emperor's New Clothes (Abrams Books for Young Readers, December 26, 2017) written by Ying Chang Compestine with illustrations by David Roberts offers a captivating new look at Hans Christian Andersen's fairy tale, The Emperor's New Clothes.  Ingenuity can come at any age.

By now, you have probably heard the old folktale about the emperor's new clothes.  Two sly tailors fool a vain emperor into believing he is wearing magical clothes, when in fact he is parading through town buck naked.  The truth is that the story took place here in China, and without any tricky tailors.

A little boy named Ming Da became emperor at the young age of nine.  His much older ministers, believing him to lack experience, took beautiful silk, rice, gold and gems from the emperor.  The boy, in fact, needed the silk to make clothes for those who had none, rice to feed the hungry and the value of the gold and gems to manage his kingdom.  He wanted to stop this but couldn't think of a way to do so without harming his kingdom and its people.

A New Year's Day tradition of wearing new clothes to ward off evil spirits gave the boy emperor an idea.  He asked his two tailors if they would assist him in defeating his corrupt counselors.  Together the trio devised a remarkable plan.

When Ming Da asked his ministers to view his new clothes he prefaced it with a single statement.  Dishonest people and honest people would see the garbs differently.  One would see resplendent fabric decorated with exquisite handiwork and gems.  Others would see burlap.

Can you imagine the moment when the boy stepped out in the open dressed in a rice sack adored with ink and juice drawings?  The ministers had to say yes when the boy asked if they wanted identical attire as beautiful as his was.  News of the making of magical clothing spread quickly throughout the kingdom.

As the ministers checked on the progress of their apparel, they kept asking about the lack of quality.  The tailors' replies lead each one of them to try to outdress the other.  This was a crucial part of the strategy of the emperor and his tailors.  Their understanding of the ministers' character lead to an outcome best for the members of the kingdom.  Children (and their tailors) have the hearts of heroes.


To this reader Ying Chang Compestine reveals her gift of recognizing what her readers want and need as well as respecting them regardless of their age.  Her narrative introduces us to the characters and brings us into the place and time but the addition of dialogue heightens the humor and growing tension.  Through the selection of word choices the true nature of the ministers, the emperor and his loyal tailors is apparent.  Here is a passage.

When Ming Da stepped out, the ministers stared at the boy emperor, mouths agape.

"Most excellent, don't you think?" Ming Da spread his arms wide.  "Feel the sleeves!"  He shook his arms.

The Trade Minister broke into a cold sweat.  He stroked the rough sack.  "Um, it's softer than the finest silk!"


You'll be hard pressed not to softly utter an "Oh, my goodness" when looking at the opened dust jacket.  One of the first things you will notice here (and throughout the title) is the attention given to detail in keeping with Chinese cultural history.  The dragon's head and partial body peering through the window with Ming Da is a well-known figure in New Year's Day parades.  If you unfold the flap on the right the entire scene continues with the body becoming longer.  From the left flap edge the body weaves across the bottom of the page with the pale sage green crossing the spine and connecting to the front.  Above the dragon's body on the back, to the left, is the structure of the room in which the window is placed.  The same hues of red, yellow and green seen here are used within the body of the book also.

On the book case the interior wordless two-page picture of the New Year's Day parade is shown.  The opening and closing endpapers are done in two shades of the rose red.  They are patterned in dragon scales.  On the title page the emperor's palace spans from page edge to page edge.

Rendered in watercolors, pen, and ink on Arches paper and others in pencil and graph paper these illustrations by David Roberts are playful, gentle and exquisite.  The blend of fine and bold lines provides a superb contrast.  David Roberts is a master of perspective.  You are drawn into his images such as the small child on the large throne, the boy emperor looking out his high window at the children begging in the street or the tailors speaking with the Agriculture Minister during one of his visits to see his new clothing.  In this scene the elaborate architecture supplies a wide frame around the three figures.  It is reflected in nearby water.

The clothing worn by all the characters is appropriate and in keeping with their economic status.  You will find yourself smiling more than once at the expressions on the characters' faces.  And careful readers will be looking at every picture for the tiny white mouse and cricket.

One of my favorite of many illustrations is on a single page.  Ming Da is secretly listening to his tailors speak with the Trade Minister.  Ming Da is in the foreground.  An ornate panel separates him from the three others.  Light from the other side of the panel casts a shadow in front of Ming Da.  As the young tailor holds up the minister's clothing and speaks, it is clear the minister is angry.  Ming Da has a knowing and hopeful expression on his face.

This title, The Chinese Emperor's New Clothes written by Ying Chang Compestine with illustrations by David Roberts, is a welcome volume in the realm of fairy tales.  Readers will find themselves drawn to the cleverness of the boy emperor and his tailors (especially with what they draw on the clothing).  At the close of the book Ying Chang Compestine in an author's note explains her childhood and the origin of this story.  It is followed by an idea for making Your Own Chinese New Year Parade Robe.  I highly recommend this book for all your collections.