Happy Monday morning, Kara.  It’s an honor to have you making a stop here at Librarian’s Quest on your blog tour for The Uncanny Express, the second title in your The Unintentional Adventures of the Bland Sisters series.  It’s been absolutely bitter cold here in Michigan but on the bright side it’s a wonderful opportunity to get cozy wrapped in a blanket, sipping hot cider and leave the confines of a comfy chair through the pages of a book.  It’s been a distinct and happy pleasure to travel with the Bland Sisters, Jaundice and Kale, first with a band of swashbuckling pirates on The Jolly Regina and second with a group of passengers concealing their true identities aboard The Uncanny Express.

I was wondering if you could tell readers who have not read these two books a little bit about the title of the series.  Why are the adventures unintentional?  Why are the Bland Sisters bland?

A lot of it is just their nature — the Bland Sisters inherently shy away from any kind of excitement or emotional upheaval, but they’ve become even more set in their uninteresting ways since their parents left to run an errand of an unspecified nature. (They’ve been gone for some time now, but Jaundice and Kale don’t tend to think about it too much. They’re sure their parents will return any day now.) It becomes clearer in The Uncanny Express that their strict adherence to routine is one of the ways they cope with their parents’ absence. It’s the only control they have over their situation.


Of course, Bland Sisters want to stay in their comfort zone. So an adventure on a pirate ship, or even — gasp! — on a speeding train, is the last thing they want to experience. Or so they think.


In the beginning of each book two pages are dedicated to the cast of characters in each adventure.  As a high school senior and college student in the seventies, I laughed out loud at the name of one of the pirates, Captain Ann Tennille. Would you tell us about the process of naming your characters?

I’m glad you appreciated that one! Of course, most of the humor in the series is for kids, but I try to include a laugh or two for the adults who might be reading along with them.
I’ve always had a thing for names, perhaps because my own first and last names have given me so much trouble, especially when I was growing up; no one seemed to be able to spell or pronounce them correctly, perhaps because of all the vowels. (FYI, it’s KARE-uh la-ROW.) As a result, I make an extra effort to remember people’s names and how to pronounce them, and this has led to a focus on names in general. I’m particularly interested in words that almost sound like they could be first names — whenever I hear a good one I try to write it down. Most of the names in the Unintentional Adventures come from that running list, though if nothing on that list seems to fit, I try to think about the character’s personality and do my best to find a name that complements it. For instance, there’s a tweedy, wan, put-upon maid on the Uncanny Express, so of course her name is Vera Dreary — and then there’s the brilliant, not-terribly-humble detective, Hugo Fromage (which, for the uninitiated, is French for “big cheese.”) I’m sure you can tell I’ve had a LOT of fun with this!
Each chapter in The Uncanny Express starts with one of Tillie’s Tips and second with a message from Professor Magic’s Rules of Illusion. The tips and rules are really quite good. I particularly like this one:
The closest thing to feeling real magic is performing for people and helping them to experience the impossible.

Why did you decide to employ this technique?

In the first book, The Jolly Regina, Kale brings along the Bland Sisters’ favorite (and only) reading material, their illustrated children’s dictionary, so the chapter heads in the story all feature dictionary definitions. That dictionary falls by the wayside — quite literally! — in the first book, but I really loved the way it worked and wanted to do something similar in The Uncanny Express. I thought it would be a nice way to show the Bland Sisters’ character development to have them toting around a pretty mundane book of housekeeping tips at the outset of the story, but venturing a bit outside of their literary comfort zone by the end. Also, just as each word defined in the chapter heads is a word used in that chapter in The Jolly Regina, the housekeeping tips and magical advice in the chapter heads of The Uncanny Express are always relevant to the action in each chapter. It’s an extra bit of fun for my readers, and it was a fun sort of challenge for me to work it all out.

Oh, yes, I am a huuuuuge Christie fan, and a mystery fan in general. I grew up watching Masterpiece Mystery and started reading Agatha Christie from an early age. Just as The Jolly Regina takes place on a ship, I knew I wanted the second book to take place on a train, and since I’d already had so much fun with the tropes of classic pirate stories, I was eager to try my hand at a Christie parody/homage. Many of the mysteries I read now are all pretty adult — I love Gillian Flynn, Kate Atkinson, Tana French, and Ruth Ware, for instance. (Interestingly, all women. Hmm…) But I also recently read (and loved) Kristen Kittscher’s The Wig in the Window and The Tiara on the Terrace, I just finished The Peculiar Incident on Shady Street by Lindsay Currie, which was terrific, and I know Lauren Magaziner has a new choose-your-own-adventure-style mystery series called Case Closed launching this spring that I can’t wait to get my hands on.

Yes, I always do tons of research. For The Uncanny Express, I read a great instructional book for kids called Big Magic for Little Hands by Joshua Jay. I also read a lot about the history of magic in books like Hiding the Elephant by Jim Steinmeyer, and I did online research on Adelaide Herrmann, the real-life Queen of Magic, on whom Magique in The Uncanny Express is based. (There is now an excellent picture book biography about her called Anything But Ordinary Addie by Mara Rockliff, illustrated by Iacopo Bruno.)

And of course, I read and re-read Murder on the Orient Express and other Hercule Poirot mysteries. In addition, I watched every episode of the Poirot mystery series and took copious notes, and I read David Suchet’s memoir about playing the great detective, called Poirot and Me (Suchet was committed to playing Poirot exactly as Christie wrote him, so I appreciated his insights).

The portions of the plot when Kale and Jaundice are dreaming add tension and intrigue to the story.  When and why did you decide to include these in The Uncanny Express?

I tend to have very vivid dreams, so I’ve always been interested in dreaming and how our subconscious takes over while we’re sleeping. Jaundice and Kale are so reticent in their waking life, but there’s quite a bit bubbling beneath the surface. It seemed right that their dreams would be pretty telling. Also, dreams continue to play a part in the third book in the series, though I don’t want to give too much more away!

As a writer you have a gift in bringing the characters to life using somewhat quirky traits.  Are the characters fully developed before the plot begins or do their personalities grow as the story progresses when you are writing?

I create character profiles before I start writing, especially for this series, where there are so many characters in each story, and I really need to feel like I have some semblance of control. But they still end up surprising me! For instance, Countess Goudenoff didn’t have a dog at first, but the line “The tea spilled, all over my Chrysanthemum” came to me, and I realized, of course she would have a yappy little lap dog, and of course it would be named Chrysanthemum! Those moments when the story takes on a life of its own are so exciting.

As I was reading both The Jolly Regina and The Uncanny Express I found myself placing sticky notes at bits of life wisdom you weave into the stories.  The final sentence in the first book makes reference to a letter.  Is this why you have the sisters’ parents communicating with them through letters?

Well, given the distance between them, their parents can only communicate with them through letters (at this point, at least). Though all that might change, sooner rather than later!
Although these stories are totally absurd, it’s important that they also have some kind of emotional resonance so the reader can feel invested. Just as the Bland Sisters are learning (however slowly and obliviously!) from their experiences, I hope my audience might be taking something away from the stories, too.

Continuing with this train of thought I enjoyed what Magique says to the Bland Sisters:

I told you that the mind is our most powerful tool.  And that if we use it often and well, it will tell us many things and show us many secrets. . . .”

In addition to the adventure, action, magic and mystery what else do you hope readers will take away from reading about the Bland Sisters and The Uncanny Express?

Among other things, Magique and Hugo Fromage encourage the Bland Sisters to be present and observant, and how important it is to go through life with your eyes and ears open. That piece of advice is also extremely relevant to me as a writer. In that way, I’m a bit of a magician and detective, too!

I think I’ll end with twelve questions.  I know the Bland Sisters would appreciate the fact the number is divisible by three.  I wish you safe travels as you continue your journey on this tour.  I can hardly wait to step into another exciting episode in the lives of these two girls.

Thank you so much — your questions were so thoughtful, and so much fun to consider and answer! 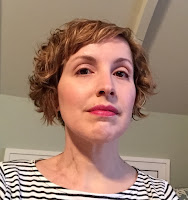 Kara LaReau was born and raised in Connecticut. She received her Masters in Fine Arts in Writing, Literature, and Publishing from Emerson College in Boston, Massachusetts and later worked as an editor at Candlewick Press and at Scholastic Press. She is the author of picture books such as UGLY FISH, illustrated by Scott Magoon, and NO SLURPING, NO BURPING! A Tale of Table Manners, illustrated by Lorelay Bove; an award-winning chapter book series called The Infamous Ratsos, illustrated by Matt Myers; and a middle-grade trilogy called The Unintentional Adventures of the Bland Sisters, illustrated by Jen Hill. Kara lives in Providence, Rhode Island with her husband and son and their cat.