Bot In A Box

There's something a little bit exciting about seeing the UPS, FedEx, or postal trucks pull up in front of your house even if you have an idea what they are delivering.  Unless it's something you've seen before, there's a slight air of anticipation and mystery.  You're never quite sure if it will be better or worse than expected. 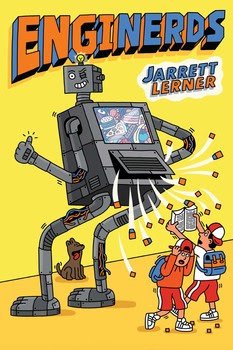 Even more intriguing is when you look out the front door of your house and see a box sitting on the porch without the benefit of knowing how it arrived.  EngiNerds (Aladdin, an imprint of Simon & Schuster Children's Publishing Division, September 12, 2017) written by Jarrett Lerner (with jacket and interior spot illustrations by Serge Seidlitz) is about the appearance of such a box, a big, heavy box.   Getting the box into the house is only the beginning of numerous difficulties about to befall the recipient and narrator.

BEFORE WE GET STARTED, I JUST WANT TO
make one thing clear about the guys I hang out with.
I did not, do not, and will not ever endorse our
"name" or "motto."
EngiNerds.
That's what we (excluding me) call ourselves.
And our motto?
"Because it's the nerds who are the engine of the
world."

After we are introduced to this bunch of brainy boys, particularly four, Dan, Jerry Lin, John Henry Knox and Kennedy, the narrator, we come to the box on the porch of Ken's house.  Finally able to persuade his best buddy, Dan, to help him, the duo gets the box into the living room.  Even after opening it, the only thing to do is put the parts together to see if it's a rocket or not. (Dan is really hoping for a rocket.)

After an hour of taxing their ingenuity and physical strength, the guys discover Kitty, Ken's less brilliant dog, has escaped the confines of the house.  After tracking Kitty down and applying the garden hose to her pizza covered fur, the three enter the house and stop cold.  The thing in the box has assembled itself.  It's a large robot named Greeeg and it's hungry, really really hungry.

Everything Dan and Ken give it, it eats, containers and all.  Soon nothing is left in the refrigerator or cupboards, except for a few radishes.  It won't eat those.  Dan leaves and Ken's parents come home from work.  Can you imagine what his mother says standing in front of the open and bare refrigerator and cupboards?  It gets worse, much worse, in the wee hours of the next day.

Finding that Greeeg has left his spot under Ken's bed, he discovers him in the kitchen looking for more food.  Believing in the theory of what goes in, must come out, Ken tells it to dispose.  Shockingly enough, a brown-black cube whizzes out of the machine's posterior section.  The next series of events can only be categorized as first, mind-boggling, and second, miraculous.

At school the next day, after the final bell rings and on Saturday, a blend of excitement and strangeness starts to fill Ken's world.  Others, other EngiNerds, have received boxes.  The robots are evolving at a rapid rate.  By any means necessary they will complete their programmed goals.  Who sent the boxes and more importantly, why?  Can cleverness save the community from further chaos? In a tension-filled conclusion continuing the undercurrent of comedy, a cliff-hanger sentence leaves you hardly able to keep from laughing and exclaiming, "OH, NO!"


Even before finishing the four-page preface, sticky notes were marking places in my copy of this book.  Jarrett Lerner has a knack for writing short, action-packed chapters, leading you from one to the other as quickly as you can turn the pages.  Between Ken's narration of the circumstances, his thoughts and the conversations between the characters you're never sure but can hardly wait to see what will happen next.

What are especially appealing are the thought processes of the boys.  It's not that they don't want to rush to solve a problem but their creativeness is impressive.  Readers will also enjoy the give and take in the relationships between the four main characters.  Here are some passages.

WELL, I TRY TO LUG THE BOX INSIDE.
But the thing is heavy.
I'm talking crammed-full-of-lead-pipes heavy.  Heavy like the box has been packed up with the pieces of a taken apart truck.
I try and try to pick it up.  I try until my back starts screaming and my forehead fills with sweat.

THE ROBOT'S VOICE IS A LOT LIKE YOU'D
expect it to be.
Every syllable is sounded out separately.
The emphasis is all off.
It's empty of any kind of emotion.
And before and after and between words, there's nothing.  Not the sound of breath moving in and out of nostrils or past lips---just cold, creepy silence.
Yet Dan's absolutely right when he says:
"Cool."
Because this is most definitely cool.
This is beyond cool.
It's probably the coolest thing that has ever happened to me in my entire, twelve-year, not-exactly-amazing-but-also-not-so-bad life.

And all of a sudden another thought worms its way into my brain.  I'm wondering again if Greeeg really is the world's greatest gift, the coolest toy imaginable, something worth bragging about to the rest of the EngiNerds.  Because right then he feels a lot more like a responsibility.  Like a maniac little cousin that I somehow got stuck babysitting, not a new friend.  Because a friend is someone who gets you out of trouble, not someone who gets you into trouble.
Right?


Completely captivating and highly entertaining, EngiNerds written by Jarrett Lerner is a surefire winner for the middle grade reader.  The chapter lengths, short snappy sentences and often hilarious conversations make this an excellent selection for a read aloud or book group.  I can't imagine a collection without a copy of this title.

To learn more about Jarrett Lerner and his other work, please visit his website by following the link attached to his name.  Jarrett also maintains a blog you can visit from his main site.  For this title, Jarrett has a Classroom Guide.  At the publisher's website you can read an excerpt.  Jarrett is a guest at author Melissa Roske's website and at All The Wonders, Books Between, Episode 41.
Posted by Xena's Mom at 12:30 AM