All Is Not Lost

When your family unit is shaken to its core you enter a form of suspended reality.  As a child when the only parent who has cared for you is suddenly removed from your life, it is particularly devastating.  The only place you have ever called home now belongs to someone else. 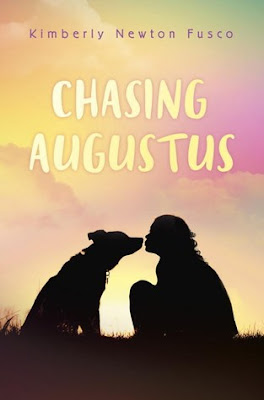 To make an unbearable set of circumstances even worse, your beloved dog is gone.  Chasing Augustus (Alfred A. Knopf, an imprint of Random House Children's Books, a division of Penguin Random House LLC, September 19, 2017) written by Kimberly Newton Fusco is the story of a girl weighed down by unbearable sadness but fueled with grim determination to find the other half of her soul.  Nothing is going to stop her.  Nothing.

My grandpa Harry says vinegar runs through my veins and I am too impatient for my own good.
He says I stomp around like a moose half the time and I am proud, prickly, and rude.
Also, I am thin as an eel and, come to think of it, not much better to look at, either.

This is how we meet Rosie.  She lives with her grandfather in a tiny apartment with windows that shake when the trains roar past. Her dad now resides at St. Camillus.  One day on his way home with Rosie from the donut shop he owns, he had a stroke.  Her mom, who left when Rosie was a baby and is now an attorney in California, sold their house and gave away Rosie's dog, Augustus.

It's the first day of summer vacation after a less than stellar year of fifth grade.  Rosie, on her dad's rickety boyhood bike she calls the Blackbird, is going to explore every nook and cranny of their community and follow every lead until she finds Augustus.  Riding out to the sand pits, a major source of income for their town and the grit which spreads everywhere but builds resolve in the people's characters, is not the best idea.  Caught in a terrible storm, barely escaping with her life, Rosie's grandfather calls a halt to her plans.

Banned from riding Blackbird, forced to help Mrs. Salvatore, who lives in their building, and befriend one of her new foster children, Philippe, Rosie is at her wit's end.  Another chatty child two years younger living in an apartment, Cynthia, desperate for friendship and lacking any parental care, rounds out this unlikely trio.  As if her summer cannot get any worse, Harry discovers Rosie's report card.  After a visit to the school and a conversation with Mr. Peterson, the sixth grade teacher every student wants, Rosie has a notebook to fill with her story.

Rosie's sleuthing leads her to believe Augustus is being held captive by Swanson, an eccentric, silent woman who lives on the outskirts of town.  Now this intrepid gal needs a whole new set of plans; which she has to alter more than once.  Readers will learn along with Rosie things are not always as they appear, neither are people.


After reading the first three pages written by Kimberly Newton Fusco you, regardless of your age, are connected to Rosie . . . and her no-nonsense, Marine-voiced grandfather Harry.  They both have been placed in circumstances not of their choosing but whether they admit it or not, you know they love each other.  Their pure willpower is constantly at odds as they both strive to survive the situation as best as they can.

Rosie's thoughts and point of view are blended with the conversations of the other characters' voices in what can only be described as marvelous.  The depictions of events, past and present, the nature of the community, the time of day and the weather transport you into this story.  When you are reading this book, everything else fades out of focus as the clarity of the tale draws you to its center.

For readers with canine companions, for those who have loved dogs and for anyone else with hope and compassion in their hearts, the words used to portray Rosie's love of Augustus will have you nodding knowingly and at times on the verge of tears.  (And even for those with hardly a sliver of hope or compassion, these portions will reach out and envelope you.)  Kimberly Newton Fusco knows dogs and people and the bonds which are made between them.  Here are some passages from the book.

My grandpa forgets how much you can love a dog or he would never say that.  My dog slept on my bed and I fell asleep to his heart beating. . . . That's when I learned the real way of things:  When you lose your dog, there's a hole in your heart as big as the sun.  Your head aches all the time and you are so empty inside because you are half the girl you used to be.

I pull the Blackbird out of the toolshed behind our apartment building and lean it against the fence.  Already the wind from the storm coming bends the thin maples on Main Street until they are looking at their feet.  They could use a pep talk.

When I walked into my papa's room, the floor sagged under all the sadness.  My papa didn't hug me and he didn't read to me and he didn't whisper in my ear the way he did every single night of my whole life when he tucked me in:  I am right here and I will never leave you.
That was the day my heart jumped right out of my chest and whirling hornets took its place.

He learned to be my mama/papa and bought me oodles of books and read them to me in my bedroom under the eaves.  We had reading celebrations with donuts and frappes when we finished a book and we baked a six-layer cake (with raspberry filling) when I read my first fat chapter book.
I was the youngest kid in the history of our town ever to get a library card---or so my papa bragged to everyone at the donut shop.  We kept pages and pages of lists of all the books we read, and when we discovered The World Book, we started making up cusswords.


Once you've started Chasing Augustus written by Kimberly Newton Fusco you have to finish it as quickly as you can.  You have to know what happens to Rosie and the other individuals who touch her life.  You have to know what happened to Augustus.  And once you've finished this book, this story and these characters will stay in your heart.  They are there forever.  I highly recommend placing a copy of this title on your professional and personal bookshelves.

To learn more about Kimberly Newton Fusco and her other work, please follow the link attached to her name to access her website.  Kimberly maintains a blog.  You will want to read her post about the inspiration for this book.  You can read several of the early chapters in part one at the publisher's website.
Posted by Xena's Mom at 11:06 AM