Without a doubt I am a one hundred percent dog person.  That does not necessarily mean I am not a cat person.  To tell you the truth, I have never been sure exactly how cats relate to me.  They are a lot harder to read, for me, than dogs.

The most time I ever spent with a cat was in high school.  One of my good friends was allowed to share her life with one.  No matter where we all went or how many people spent the night in the presence of that cat, it always, without fail, ended up on my pillow the next morning.  Sometimes it was literally on my head. 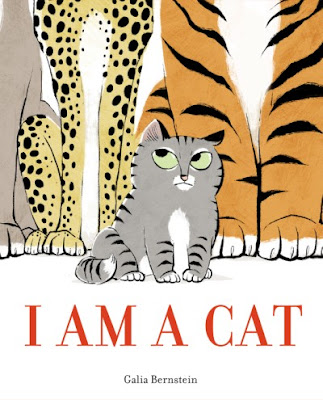 We know cats come in all shapes and sizes from almost all corners of the world.  I Am A Cat (Abrams Books for Young Readers, February 6, 2018) written and illustrated by Galia Bernstein, her debut title as both author and illustrator, presents us with a discussion.  This discourse begins with several simple declarations.

The small gray cat makes these statements standing in front of a panther, tiger, cheetah, puma and a lion.  Simon's assertions freeze them, wide-eyed, where they sit, like deer caught in the headlights.  Seconds later they are laughing like he told them the best joke they've ever heard.

The first to point out the error of his thinking is the lion.  Simon can't be a cat.  Where are his mane and the tuft at the end of his tail? And the sounds he makes can hardly be considered a roar.

Cheetah points out Simon's size and shape in contrast to his own physique.  Simon would be left in the dust if the two of them raced.  Mountain dweller Puma notes he knows

with more stamina that Simon.  Panther mentions the lack of his living in a proper habitat similar to his own.  Looking down at Simon with more than a little disrespect, Tiger asserts he looks more like a particular rodent than a majestic big cat.

When Simon professes his bewilderment announcing their differences, he challenges how they can all be cats.  Lion's reply mentions all the traits they share together.  When he finishes, Simon makes the only conclusion he can.  Lion, Puma, Panther, Tiger and Cheetah with a lot of scrutiny and mumbling answer as only they can.  Cats will be cats.


Galia Bernstein's sense of humor bursts forth immediately and without warning when the big cats respond to Simon's first three sentences.  Our interest and participation in the story comes when we read (listen) to the big cats' refutations.  You can almost hear them speaking as each one enumerates their distinctive traits.  This technique increases the subtle tension, leading us to yet another surprise in the narrative.  With cleverness Galia Bernstein weaves truths about each cat and cats in general into the dialogue.  Here is a passage.


Rendered digitally with applied hand-painted textures the illustrations, beginning with the opened dust jacket, invite readers to reach out and touch them.  The lower portion of the seated big cats extends over the spine to the far left side and into a portion of the flap.  On the right, one of the tiger's feet, legs and his tail covers a section of the right flap.  The text there curves around the curve of the tail.  The look on Simon's face on the front leads readers to believe something is about to happen.

On the book case a white canvas provides a background for Simon on the front, licking a paw as he looks up.  To the left, on the back, the entire group of cats forms a sleeping mound with Tiger as the base.  The opening and closing endpapers are an orange-red.  Under the text on the title page, Simon rests on a branch as if it's a hammock.  With a page turn we see his paw prints move from the far left page to where he sits on the right page.

For all of the illustrations white space is used with excellence as a design element.  The heavier, matte-finished paper highlights all the cats.  With the exception of two, all of the images by Galia Bernstein span two pages.  What she does to supply further interest and engagement for readers is to shift the perspective.  We move from a wider view to a close-up, see Simon as if we are seated with the big cats, and we see the big cats around us as if we are Simon looking up at them.

One of my many favorite illustrations is the first one without words.  As soon as I saw it the first time and every subsequent time, laughter bubbles up inside me.  You know something is going to change within the next few moments.  You hold your breath.  From left to right across two pages we see the upper portion and heads of the big cats in a row, Panther, Tiger, Cheetah, Puma and Lion.  They are in different poses.  Their eyes are wide open and their facial features are frozen.  It's the perfect picture to preface what follows.


Written and illustrated by Galia Bernstein I Am A Cat answers the age old question of what makes cats (or us) the same while honoring our differences.  The blend of illustrations, dialogue and humor will make this a title frequently requested at story time.  It would be a fantastic book to include in a unit on cats, fiction or nonfiction.  You will need to have this as part of your professional and personal collections.

By following the link attached to Galia Bernstein's name, you can access her website to learn more about her and her other work. Although the posts on her blog are older they give insight into her art.  Enjoy the book trailer.