Wacky And Wild Fun In The Sun

Spring Break.  Are there any two words sweeter than those to students and their educators?  As a child, memories of a visit to Parrot Jungle in Miami, Florida with the colorful birds sitting on my arms and shoulders linger.  Later as an educator when the mass exodus began in April, cars with students and their parents would honk and pass my husband and I as we all traveled south.  For those living in the northern regions of the United States, the lush greenery, vivid floral displays, sun, sand and surf are an annual welcome respite. 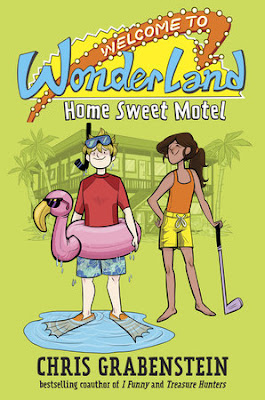 Staying at a variety of motels with swimming pools, eating at restaurants serving local cuisine and exotic dishes, and exploring all the historic and unique attractions leave unforgettable impressions no matter your age.  In the autumn of 2016 a new series which completely recreates spring break memories while shaping and sharing the life of year-round residents was released.  Welcome To WonderLand Home Sweet Motel (Random House Children's Books, October 4, 2016) written by Chris Grabenstein with illustrations by Brooke Allen introduces a cast of characters in comedic situations which will have you exploding with laughter one minute and on the edge of your seat the next minute.

Gator Tales
Like I told my friends at school, living in a motel is always exciting---especially during an alligator attack.
"To this day, nobody knows how that giant alligator made it up to the second-floor balcony of my family's motel on St. Pete Beach," I told my audience.
The cafeteria was so quiet you could've heard a taco shell snap.

This is readers' introduction to Phineas Taylor Wilkie, known as P. T. to his friends, student at Ponce de Leon Middle School and resident of the Wonderland Motel, formerly known as Walt Wilkie's Wonder World.  All that's left of the motel's glory days in the 1970s are a bunch of large, eclectic decorations like a giant dinosaur, rocket ship, and jackalope, a small train not currently running on tracks and a miniature golf course.  His grandfather, Walt, owns the place and his mother is in charge of managing it.  P. T. is a spinner of outlandish and humorous tales taking after his grandfather who looks at life with a twinkle in his eye and is constantly tinkering on his next big dream.

In short order we become acquainted with P. T.'s staunch friends, Pinky, Kip and Porter as well as new long term guests at the motel, Gloria Ortega (P. T.'s age) and her sports newscaster father.  Gloria has a knack for business unlike most people her age (or many adults).  Her sensible pragmatic approach paired with P. T.'s flare for fiction is a match made in hospitality heaven.

P. T.'s fabulous life with his mother and grandfather at Wonderland Motel is in serious trouble!  A balloon payment on a loan his grandfather took out on the motel and forgot to tell his mother about is due.  They need to raise one hundred thousand dollars in thirty days!

Gloria, P. T. and his grandfather hatch one outlandish marketing scheme after another which seem to be working but trouble is never far behind their successes in the form of a middle school history teacher, Mr. Frumpkes, a beautiful woman from Grandpa Wilkie's past and two notorious criminals.  An Unsolved Mysteries television segment elevates the action and the hilarity.  Will Wonderland Motel be saved?  Only time, a baloney with yellow mustard on white bread sandwich and a tiger will tell.

We can't afford to give away free ice cream, Dad," Mom told Grandpa when she saw me and my friends swirling our cones under the pump handle.
Pinky Nellington wasn't using a cone.  He just stuck his face under the nozzle.

"Spring Break also means no school," I said, because as you'll see, I like to look on the bright side, even when it's darker than the inside of my pants pockets at midnight.
Not that I've ever actually looked inside my pants pockets that late at night, but you get the idea.

"P. T., tell me:  what makes Walt Disney World so special?"
"Um, everything?"
"Nope, nope, nope.  It's the stories.  Why do kids want to meet all those Disney princesses at the castle?  Because they know their fairy tales backward and forward before their families even pull into the parking lot.  Pirates of the Caribbean?  That ride tells such a great story they turned it into four different movies."

When he was all laughed out, he belches up another cloud of Cel-Ray salad gas.
"Of course," he said, rubbing his face, "no one wants to hear my corny old stories anymore."
"But it used to work?"
"Like a hot knife through presliced butter.  Because everybody needs a little wonder in their lives, P. T.  That's why vacations were invented.  To give us room for amazement!" 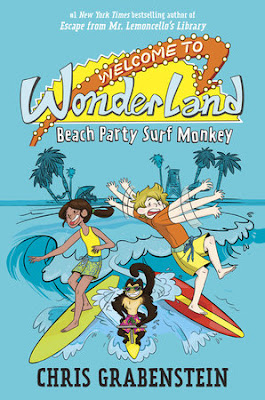 Fortunately for readers another stellar title in this series was released this year.  Welcome To WonderLand Beach Party Surf Monkey Book 2 (Random House Children's Books, May 23, 2017) written by Chris Grabenstein with illustrations by Brooke Allen follows further escapades of P. T., Gloria, Grandpa Walt, P. T.'s mom and Gloria's dad as they try to save the motel from further trouble, this time at the hands of a hotel developer.  The sun isn't the only heat coming to the residents of Wonderland Motel.

Scary Tales
"When you live in a motel," I told my audience, "you never know when your neighbors might be fiendish jewel thieves!"
Like always, the whole cafeteria was hanging on my every word. Even the lunch ladies in their plastic shower caps had come out to hear what I'd say next.  It was so quiet you could hear a straw squeak its way into a milk carton.

As P. T. and Gloria bask in their recent success another villain finds his way into the lobby of their motel.  Edward Conch aims to acquire the Wonderland Motel as he did three neighboring motels to make his hotel bigger and better.  He and his equally devious daughter always get what they want...or so they say.

His proposition appeals to P. T.'s mom who longs for a solid future for her son and the loss of worries about making ends meet.  Believe me when I say P. T., Gloria and Grandpa Walt are not about to let this happen.  In the middle of their first money-making weekend gone wrong, a miracle in the form of a Hollywood star taking cover in the rump of their large dinosaur changes everything for the motel residents.

To their utter amazement a pitch at a movie production meeting winds up winning their motel as the setting for Beach Party Surf Monkey. Chaos in the form of a movie crew, a male star with a meltdown temper, a down-to-earth female star and a YouTube sensation monkey fills the Wonderland Motel rooms and grounds.  While you might think this ends the financial troubles for our characters, it's only the beginning of battling those who want them to lose.  Enemies known and unknown will do anything to see this movie fail.

The ins and outs of movie-making, competition in the motel-hotel trade, a kidnapping and a notable disappearances increase the excitement and mystery amid zany day-to-day events.  A chicken gobbling gator, a cannonball pool winner, a poop-throwing monkey, and the arrival of a four hundred pound pig certainly contribute to the high laughter factor.  A stinky smell eventually tells the true tale.

As soon as you read the first few sentences penned by Chris Grabenstein you realize this man has a pure humor gene in his makeup.  The one-liner thoughts and statements and the stories P. T. thinks, says and tells will have you smiling from cover to cover, page after page.  This boy thrives on the power of story.

In the other characters of Gloria, Grandpa Walt, P. T.'s mom and Gloria's dad we see wonderfully human people who reach out and grab life through their bold and bright personalities.  P. T.'s and Gloria's friends, the actors, film crew and the figures of Mr. Conch and Victoria and the secondary characters all provide essential parts.  Through all their conversations we find ourselves fully connected to every moment.  Here are some sample passages.

"ESPN is the leader of the pack," Mr. Ortega tells me all the time.  "And if you're not running with the lead dogs, P. T., all you see is a bunch of furry butts."

"And who, pray tell, is Kevin the Monkey?" asked Mr. Frumpkes.  "One of your pimple-faced pop stars?"
"Kevin the Monkey is a supercool capuchin from the Sunshine State Primate Sanctuary," said Kate.  "He's a total YouTube sensation!"
"And a savvy PR vehicle," added Gloria.  "Last year Kevin the Monkey's channel earned one point six million dollars for the animal rescue charity, thanks to rollover ads.  Net-net, he and the primate sanctuary have put together a rock-solid monkey business plan!"
When Gloria said that, the class cracked up.
"Monkey business!"
The laughter grew louder when somebody (probably Kate Mackenzie Williams, because she's a total gadget freak) used their phone to hack into the Smart Board's Wi-Fi connection and run a hysterical Kevin the Monkey clip.

Gloria and I have since turned it into our private clubhouse.  It's a great place to hang out, swap stories, and plot schemes---except in August.  Then it's more like a sauna inside an oven located at the molten core of the earth.

Grandpa proudly displayed his package of luncheon meat to the crowd.  "Bologna, ladies and gentlemen.  It is the duct tape of foods.  There ain't nothing it can't do!"

Throughout both titles the artwork of Brooke Allen, done in black and white, further defines the narrative adding to the hilarity.  Her full page illustrations, partial page pictures and single page visuals crossing the gutter are brimming with details.  Images spanning two pages add impact to the given event.

Many of the illustrations contain speech bubbles with additional text enhancing the given moment and mood.  They clarify the personalities of the characters further.  The chapter beginnings all contain a single small picture in keeping with the book title.

Welcome To WonderLand Beach Party Surf Monkey Book 2, following Welcome To Wonderland Home Sweet Motel, written by Chris Grabenstein with illustrations by Brooke Allen is exactly what readers need---action, mystery and laughter...lots of laughter.  These characters find themselves in situations with hilarious results as they seek to solve realistic problems.  Using P. T. as a narrator amid the upbeat conversations of all the characters ties readers to his stories.  We want these characters to succeed.  And amid the fun there are issues which will promote discussions.  I can't imagine a professional bookshelf without multiple copies or a personal bookshelf without a set.

To discover more about Chris Grabenstein and Brooke Allen and their other work please follow the links attached to their names to access their websites.  At Chris Grabenstein's pages for these books you can view book trailers, read excerpts and listen to audio.  At the publisher's websites you can read excerpts and view the interior of the second title.  Chris Grabenstein is the winner of the 2017 Sid Fleischman Humor Award for the first title.  There are more participants in the Welcome To WonderLand Beach Party Surf Monkey Blog Tour. Here are three of them.  Teacher librarian Laura Given interviews Chris Grabenstein at LibLaura5.  Educators Jen Vincent at Teach Mentor Texts and Michele Knott at Mrs. Knott's Book Nook talk about the title.
Posted by Xena's Mom at 2:34 AM