Of Capes And Courage

Some people carry an object with them believing it inspires them when they need it the most.  There is something intrinsically reassuring about reaching into your pocket to rub your fingers over a treasured memento; its value known only to you.  Others wear a specific article of clothing to ensure good luck is with them during a particular day or a specific event. 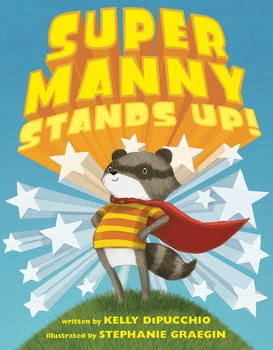 Remembrances are attached to certain outfits hanging in our closets.  We recall some as gifts, or the place it was purchased or the spectacular circumstances we enjoyed while wearing it.  Super Manny Stands Up! (Atheneum Books for Young Readers, July 4, 2017) written by Kelly DiPucchio with illustrations by Stephanie Graegin speaks to the superhero in all of us.

Every day Manny put on a different cape after school.

Each colored cape represented his ability to conquer those beings who wished him or others harm.  They also made a very special trait within Manny rise to the surface.  Donning his blue cape made battling unsavory sea creatures easy.  Manny was fearless.

His red, yellow, purple, and green capes helped him defeat zombie bears or forest giants.  He could be brave or powerful depending on the foe and the cape he wore.  His most important cape was the one saved for school.  It was his

No one could see this cape but Manny knew it was there.

Mutant monkeys on the playground and giant squids in the cafeteria were no match for Super Manny.  One day at lunch a voice boomed above the general hum.  Tall One was teasing Small One.  Manny knew he should do something but his capes were at home.  Then he remembered his

Manny left his seat and spoke.  Tall One immediately turned his attention to Manny questioning his words.  Our invincible raccoon spoke louder.  Tall One was surprised and not pleased with what happened next.  A cape spread courage from one to many.


With her first sentence Kelly DiPucchio welcomes us into the story.  We are already asking questions.  Why does Manny put a cape on after school?  Why does he have different capes?  As each color is depicted a narrative rhythm is established with the introduction of the dangers and the corresponding trait in Manny.  The distinctive characteristics are shouted by Manny in speech bubbles.

During the disruption in the cafeteria all those imaginary evils Manny has fought and conquered are listed in his mind again along with a mantra of his attributes.  This technique asks readers to participate in the tale of Super Manny.  Here is a sample passage.

When legions of alien robots with laser-beam eyes invaded, Manny tirelessly fought them off in his purple cape.


Now I ask you, how can you resist the proud, happy raccoon standing on the front of the dust jacket? (I am working with an F & G.) His confidence radiates as strongly as the stars blasting forth behind him.  The title text, Manny, and the stars are varnished.  Each individual star is textured with raised glitter.  To the left, on the back, we see the same hill on the blue background.  This time Manny is facing away from us.

On the opening and closing endpapers illustrator Stephanie Graegin is giving us a hint of happenings to come in the book.  On the first set Manny is wearing different colored striped shirts with different colored capes.  All the poses (40) are altered.  The final set has an addition to the rowed pattern.  (My lips are sealed.)

Rendered in pencil and ink and then assembled and colored digitally the illustrations span two pages, single pages and smaller images on a single page.  For those smaller ones on single pages, Stephanie Graegin usually has a circular shape.  Sometimes the elements will extend outside this frame.

When Manny is facing each of the collective foes they appear in the color of his cape superimposed over the normal activities of the other characters.  When the angry army of zombie bears attack, it is in the middle of his sister's tea party.  Her disgust at his roaring is typical and funny.  Manny is beating the forest giants in a game of croquet as his mother and sister work in the garden.

The layout and design of these images is superb.  The details will have readers pausing to look; the title of Manny's sister's book, the kind of books Manny likes to read, and the cat holding chopsticks in the cafeteria.  Body postures and facial expressions are as exactly as you would expect and are sure to produce smiles in all readers.  Readers will want to join Manny in his exploits.

One of my many favorite illustrations is when the unsavory sea creatures appear.  On a crisp white background Manny is behind a fish bowl looking at the regular fish inside.  The outraged sea creatures are beginning to float from the top as water splashes.  This shift in perspective heightens the pacing.


Readers will count this title as one of their favorites on having the courage to speak up against those who are being unkind to others.  Super Manny Stands Up! written by Kelly DiPucchio with illustrations by Stephanie Graegin is an inspiration to all readers.  One person can make a difference especially if they are wearing their invisible cape.  Make sure you have a copy of this title on your professional and personal bookshelves.

To discover more about Kelly DiPucchio and Stephanie Graegin and their other work please follow the links attached to their names to access their websites.  At the publisher's website you can view interior images. Kelly DiPucchio maintains a blog.  Dylan Teut, director of the Plum Creek Children's Literacy Festival in Seward, Nebraska, interviewed Kelly DiPucchio on his blog, Mile High Reading.