You may not be able to see them all the time, but you can certainly hear them.  Their buzzing, chirping and whining announce their arrival and residence.  Others who live in relative silence leave behind their handiwork in the shape of silken webs or sandy hills.  It can be said that several of them are the ultimate survivors, their existence noted before the dinosaurs. 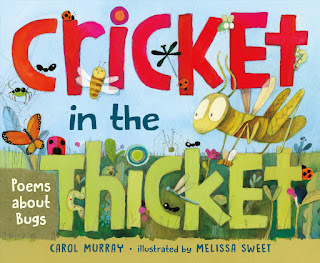 Some take wing and fly as soon as we approach.  Others, as still as stone, blend in with their surroundings. If we are fortunate enough to see them, it's like a gift.  Cricket in the Thicket: Poems about Bugs (Christy Ottaviano Books, Henry Holt And Company, May 9, 2017) written by Carol Murray with illustrations by Melissa Sweet is a lighthearted, informative approach to acquainting readers with members of the insect community; twenty-nine poems take us on a journey through their buggy realm.

As the male cricket chirps we are reminded other cultures keep them in their homes as pets.  Can you guess which insects number the highest in the world?  Delicate to touch, as light as a feather, a cicada leaves behind a layer.  No weaver but a wanderer, the jumping spider uses silk to enhance travel toward prey.

The next time you see an inchworm carefully watch how they move before they become moths.  Bumblebees keep our flower population thriving sharing the task as pollinators with honey bees.  Dung beetles were sacred in ancient times?  Who knew? They have a secret which makes them able to swim underwater; water beetles do more than skate along the surface.  Is it a stick that looks like a bug or a bug that looks like a stick?

If you are a feathered friend, beware the milkweed muncher, they are poisonous and so are their majestic butterflies, monarchs.  Do you know the other name for harvestman?  Who has ears near their knees?  If their web is no longer useful, spiny-back spiders eat them.

When the dreaded mosquito is near, she had better look before she bites if an ebony jewelwing is close.  If we only saw life through a microscope (sometimes not always), these creepy crawlies, fruit fly, tick and mite, would be given more attention earlier.  In truth some bugs bug us but these poetic and visual tributes tell and show us, they are indeed mighty.


You will want to run outside as soon as possible after reading these lively verses penned by Carol Murray.  She has created an excitement for bugs!  Her focus is on the essential quality of each insect.  Her rhyming, rhythmic lines replicate those characteristics.  In small paragraphs at the bottom of the page she elaborates on something mentioned in the poem.  Here is one of her poems in its entirety.


Woven in, around and under the title text Melissa Sweet places many of the bugs highlighted in the narrative.  She gives them personality with a plus!  The varnished red on cricket and green on thicket add to the pizzazz of her design.  To the left, on the back, the poem noted above is placed on a light background with a group of dragonflies flying around a naturalist's collection envelope.  The opening and closing endpapers are the same shade of red as the title text.

These illustrations rendered in watercolor and mixed media are as fascinating as the subjects they feature.  On the title page a grasshopper is leaping over an array of flowers beneath the text.  On the dedication page a close-up of a leaf shows a grasshopper munching out a large hole.  He is looking right at the reader through the gap in the leaf.

For each poem a distinctive, individualistic image has been created, many of them bringing the insect world closer to readers. Most of them are on single pages but for three Sweet spans two pages.  Her unique details will have you stopping at every page turn; a cricket poised on the edge of a red tennis shoe, ants crawling over a single stalk as a night scene unfolds, inchworms and measuring tape for a garden plot, the B in buzz becoming bumblebee wings, six circles showing a roly-poly rolling...up and unrolling and June bugs blasting against a light bulb.  Her style and color combinations take you into the moment.

One of my many favorite illustrations is for the inchworms.  The background is a dark sage green.  A root vegetable (radish) is magnified.  On three sides a blue-green measuring tape frames it.  Pieces of tape are strategically placed off the top, bottom and left sides.  Inchworms are crawling along the top and left sides.


Cricket in the Thicket: Poems about Bugs written by Carol Murray with illustrations by Melissa Sweet is one of those wonderful books with multiple appeal.  You can use it in an insect unit or an exploration of poetry.  There is a contents section at the beginning and Cricket Notes at the end.  These provide even more information about each bug.  You really need a copy of this title on your professional and personal bookshelves.

To learn more about Carol Murray and Melissa Sweet please visit their websites by following the links attached to their names.  Carol Murray has a book trailer for this title on her site.  At the publisher's website you can view interior images.
Posted by Xena's Mom at 3:34 PM