Late last night when the temperature fell to eighty degrees, it was more comfortable for dog walking.  The nine month old puppy was eager to race down the road after confinement in the air-conditioned home all day.  All the smells of the neighborhood assaulted her with their messages.  She probably had no idea the sight of the first firefly of late spring was the best part of her human companion's day. 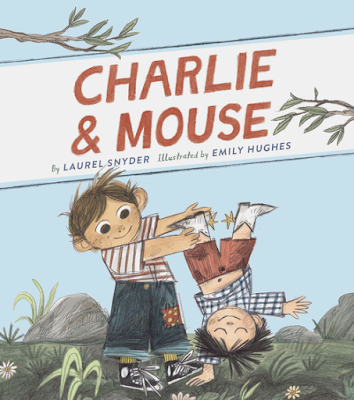 A firefly signaling in the darkness beneath a few stars and the light of the moon is an unpredictable thing but nevertheless a welcome reminder of nothing is better than those things in life which cost nothing and have the appearance of simplicity.  In reading the first title in an early chapter book series, Charlie & Mouse (Chronicle Books, April 11, 2017) written by Laurel Snyder with illustrations by Emily Hughes it is readily apparent how much joy can be found in everyday family life.  You need to choose how you view each part of the day.

LUMPS
Charlie woke up.
There was a lump beside him.
He poked the lump.
The lump moaned.

In this first of four chapters Charlie is trying to get the lump, his brother, to rise and shine.  Charlie can hardly wait to get the day started.  Today is the day of the neighborhood party.  The lump, Mouse, is skeptical but enthusiastically runs to wake up Mom and Dad.

These two lumps are not as willing to wake up.  In fact one lump, Mom, has a final last word.  As the brothers excitedly chat about the neighborhood party in the second chapter, Dad and Mom agree to accompany them bringing cookies, a wagon and Blanket as passenger.  As they parade through the neighborhood their numbers grow as more and more children respond to the neighborhood party invitation.  Their arrival at the appointed place reveals a most wonderful surprise.

Most people will agree on the lure of the combination of rocks and children but Charlie and Mouse devise a scheme to use rocks...to make money.  They are going to take particular rocks from the outside of their home, carry them in the sturdy wagon and sell them to their neighbors.  This, like many things, does not go according to plan.  It has its low points, high points and beginning back at square one.

Readers are asked to join Charlie and Mouse at the close of their day in chapter four.  They are wonderfully normal in their bedtime rituals and desire to prolong the inevitable.  It's when the previously normal routines have been exhausted; Charlie makes a most unexpected request.  With Mouse's support, Mom complies.  After the final good nights are exchanged, the conversation of Charlie and Mouse will have readers smiling if not laughing out loud.  All ends as it began with a lump.


We are introduced to Charlie, Mouse, Mom and Dad and members of their neighborhood through a pleasing, flawless blend of narrative and dialogue.  These superbly written simple sentences by Laurel Snyder are appealing to early readers and those who read aloud to willing listeners.  The thought processes and resulting conversations between the two brothers as they address events in their lives are marvelous. Their realism wraps around you like a comforting, cozy blanket.  Here are two sample passages from ROCKS.


There is no denying the smile-inducing illustration on the matching dust jacket and book case.  Who can resist the obvious happiness of the two brothers?  The warmth on their faces, their clothing and tousled hair suggest a loving relationship and casual, what-can-we-do-next outlook on life.  The subdued, more earth tone colors are ideal for these two characters and the stories we read about them.  To the left, on the back, is their wagon, ready for another adventure.

On the opening and closing endpapers, using the hue of the grass on the jacket and case as a canvas, illustrator Emily Hughes fashioned a pattern of bananas, rocks, socks, tree branches, boots with yellow-star spurs, grass and ice cream cones.  Beneath the text on the title page is a portion of an interior image of the brothers walking and pulling their wagon in the parade to the playground for the party.

Rendered by hand in graphite and with Photoshop

the illustrations vary in size throughout each chapter.

They may extend across a single page, edge to edge or appear as small insets on a single page.  They are loosely framed by white space with elements breaking those edges in some of the images.  The looseness of their boundaries is an excellent match with the narrative.

Giving the children and even the adults wide-eyed looks adds to the undercurrent of wonder-is-everywhere throughout this book.  The illustrations complement this theme in the endearing details.  Seeing the children's art on the walls, patchwork quilts, the neighborhood climbing tree, children digging in the dirt, Mom's surprise (more than once) and Charlie patting Mouse's head as they brush their teeth a second time before bed declares to readers all is fine in this world and goodness is right in front of them every single day.

One of my favorite illustrations of many is when Charlie and Mouse are on their way to the playground to celebrate the neighborhood party.  They are wearing special outfits, a cape, party hat, headband with antennas, a fringed vest and tutu.  Is that a magic want in Charlie's hand to conjure more magic? They are looking up at Helen and Lily hanging from a branch in the climbing tree.  Sam, their dog, is looking up too.  Delightful!


For anyone who reads Charlie & Mouse written by Laurel Snyder with illustrations by Emily Hughes, as soon as you finish you will want to read it again...and again.  You simply don't want your time with these two brothers and their family to end.  The affection among the members is mutual as is the kindness everyone extends to each other in the neighborhood.  I can't imagine a professional or personal bookshelf without a copy of this book.  The second title, Charlie & Mouse & Grumpy, is due for release in early October 2017.

To learn more about Laurel Snyder and Emily Hughes and their other work please follow the links attached to their names.  At the publisher's website there are links to a teacher's guide, activity sheets and a poster.  Laurel Snyder talks about these books and the characters at Elizabeth Dulemba's site.  Emily Hughes is featured at Picturebook Makers.  Teacher librarian, author and blogger Travis Jonker wrote an interesting review on 100 Scope Notes.
Posted by Xena's Mom at 3:33 PM