Have You Read The Instructions? Sputnik's Guide To Life On Earth Blog Tour

On October 4, 1957 the Soviet Union launched the first artificial satellite into space.  It was called Sputnik 1.  Although there are different reports as to whether it could be seen by the naked eye or needed the assistance of binoculars, I distinctively remember as a little girl standing outside with my parents and younger sister watching it move across the sky.  On November 3, 1957 Sputnik 2 was shot into space by the Soviet Union.  This time the vehicle had a passenger, a dog named Laika. 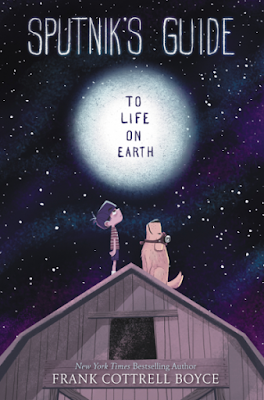 Renowned British author, Frank Cottrell Boyce, takes a huge "what-if" about these launches, specifically the second of the two, as a basis for his newest title, Sputnik's Guide To Life On Earth (Walden Pond Press, June 20, 2017).  Is it possible the dog Laika survived her mission in space? If so, how would we know?

In one of his grandfather's more lucid moments he recognizes what his grandson, Prez, just handed him.  He believes it to be a list with twenty-seven items on it but it is more than a list.  It's the twenty-seven chapters of this book, an extraordinary story of a life-changing summer.

It begins with a doorbell ringing at the home of the Blythes family, on a farm called Stramoddie.  Prez, who is not speaking at all, is staying with them for the summer after recently being placed at the Children's Temporary Accommodation.  (His grandfather is unable to currently care for him.)  This family is highly talkative so they, unlike Prez, don't even hear the doorbell ring.  When he answers it, Sputnik is standing there.

I have to describe him, because there's a lot of disagreement about what he looks like.
Height and age---about the same as me.
Clothes---unusual.  For instance, slightly-too-big sweater, kilt, leather helmet like the ones pilots wear in war movies, with massive goggles.
Weapons---a massive pair of scissors stuffed into his belt like a sword.  There were other weapons, but I didn't know about them then, or I definitely wouldn't have let him in. ...

You might like to know at this point the home on the farm called Stramoddie has no doorbell.  Sputnik looks like a dog to everyone else and he can read Prez's mind.

We quickly come to understand Sputnik has otherworldly powers; like making a toy lightsaber work as if it is real. (Annabel's birthday party is epic.)  He can use gravity like it's currents of air. But the most important thing about Sputnik, other than he is not a resident of Earth, is he is here to save Prez from eminent death.  This planet is about to be eliminated.

Sputnik and Prez have as long as the summer to find ten things worth seeing or doing on Earth.  They are writing a new guide to replace Laika's guide. (Sputnik has met the dog.)  Prez wonders if the map his grandfather made for him of their travels on the seven seas and the places they visited when he was a baby can assist them.  Basically he is worried sick.

With every chapter the exploits of Sputnik increase; grocery shopping without the benefit of money, using a digger to travel as fast as a rocket, concealer cream with unusual properties, a television remote changing things more than channels, and breaking less-than-savory people out of jail to name but a few.  Then, the summer is over, there are only nine things on the list and Prez has to return to Temporary.  Sputnik is staying on the farm but his work is unfinished.

Events begin to happen at lightning speed with the conclusion in sight; an amazing discovery about the map, a race on scooters, a death-defying encounter with a high tide and the revelation of the sea chest contents.  The laughter continues but the promise of greater things is fulfilled.  You will never look at a post-it note the same way again or read an instruction manual without wondering if you are missing something exceptional.


The tapestry of this tale is tightly woven with a multitude of threads.  Frank Cottrell Boyce explores the loss of memory in the elderly, the loss of home for a child, the beauty of a loving family, and the use of facts from the past to create a believable present.  Prez's voice rings with authenticity as each character is introduced through thoughts, conversations and actions.

With chapter titles like Spicy Chicken Wings, Lightsabers, Milk, Chicken and Mushroom Pie, and Curtains you are never sure how the chapter will unfold but the episodes do circle back or surround the introductory word or words.  The final sentence in many of the chapters begs you to continue;

"Didn't I mention?  Earth is about to be destroyed."
"Oh, no. No, no, no.  I have big plans for this pee.  Very big plans."
We were already running away.
But things don't always go according to plan.

The underlying current which keeps you turning pages in the midst of serious situations is the hilarity.  Frank Cottrell Boyce uses humor masterfully.  Here are some sample passages.

Annabel swung around to take a bow.  Her best friend saw the blade of light coming toward her and ducked just in time to stop it decapitating her.  But not in time to save her thick blond ponytail, which fell at her feet like a dead gerbil that was slightly on fire.  Everyone stared at it in horrible silence.
The lightsaber could have cut her head off.
"Said I could fix it, didn't I?" said Sputnik, smiling more than ever.  "Smell that burning hair!  This is a great party."
We have to stop this.  Someone could get killed.
"Why give her a lightsaber if you don't want her to use it?"
It's supposed to light up and twinkle!  Not cut things in half!
"Twinkle?  Where's the fun in twinkling?  This is a fantastic party.  I was told Earth parties were good, but I never realized they'd be this good.  I never realized they'd involve so much fire and destruction.  These kids are having a great time."
He was right about that.  Having your hair cut by a fully functioning lightsaber was the new face painting.


"Well, that's something I love about your species.  How everyone helps to make an idea better and better until after about a hundred years it's completely brilliant.  Fish and chips are like a big knot tying everyone together.  We can put that on the list.  Fish and chips outside can go in the Companion."

Truthfully when I finished the final page of this book I was totally speechless for a few moments, stunned by the sheer genius of Frank Cottrell Boyce's writing and this story.  I repeatedly laughed out loud for long moments of time and I shed a few tears more than once.  Sputnik's Guide To Life On Earth is a book you must read.  Then you have to tell as many people as you can about it.  Finally you have to recommend they read it aloud.  Make sure you have at least one if not more copies on your professional bookshelves.  I know I will have at least one copy on my personal bookshelves and several to give away. 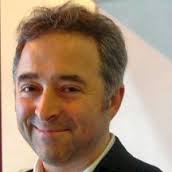 If you wish to know more about Frank Cottrell Boyce, please follow the link attached to his name to access a website.  This title was released earlier in the UK.  At the Panmacmillan site you can read an excerpt.  At The Guardian there is an article about the scrapbook made by Frank Cottrell Boyce for this book.  It is a fascinating read with illustrations.