News Flash! Monster On The Loose!

There are days within a few minutes of a lesson or browsing for books starting, the entire class is called back to the tables.  Looking each student in the eyes, I question them, wondering what happened last night.  One or more voices ask me what I mean.  Again, I inquire whether they were abducted by aliens or if a dark cloud passed over the city while they were sleeping.  Seeing their quizzical looks, I inform them monsters seem to be here instead of my wonderful students. 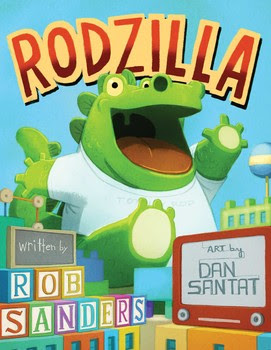 After seconds of stunned silence, we all burst out laughing dissolving the spell cast over the guys and gals.  Most people of all ages have those moments when their true selves are replaced with something out of the ordinary.  Rodzilla (Margaret K. McElderry Books, an imprint of Simon & Schuster Children's Publishing Division, May 9, 2017) written by Rob Sanders with art by Dan Santat brings the latest news to readers about mayhem in normally quiet streets.

Big, bad trouble
in Megalopolis.
This is Channel 15
News reporting, and ...
one moment, please...

The reporter is stunned by the sight of an enormous, green chunky lizard called Rodzilla! His roar is deafening.  His first attack has the citizens gasping for breath as a fog as green as his skin fills the air.  And the smell is enough to have skunks running for cover.

Innocent bystanders are scrambling as gooey gobs plop after the launching of a disgusting projectile.  Wait!  Something new is happening.  The colossus has paused.  A rumbling is resonating from his rotund figure.  Head for the hills people!

Emergency personnel are on the scene trying to redirect his focus and clean up the area.  Oh, no!  He seems to have lost his equilibrium.  What is going to happen to Rodzilla...not to mention a whole block of buildings?

Beware residents of Megalopolis the mammoth  is on the move once more!  He's heading to the heart of the community.  He's ready to reach for new heights. Yikes!  Another disaster floods the folk watching in horrified shock.  Is this the end of their fair city?  Will no heroes step forth to vanquish this jumbo giant?  Let's hope for the best.  Stay tuned.


When the on-the-scene reporter begins and continues this narrative, readers know they are in for an action-packed treat.  Rob Sanders takes us into the thick of the pandemonium, presenting what is normal as if it is extraordinary.  Short but descriptive sentences and phrases create the comedy, leave clues and lead readers to a conclusion; a conclusion which they have previously witnessed or may have been a participant.  Here is sample passage.

Look out! ... He's ... heading ... to ...
City Center Park!
Rodzilla has unleashed ...
a slime missile!
Drivers are losing control of their vehicles.
Pedestrians must duck for cover.


Careful readers will begin to gather hints as to the narrative when looking at the matching dust jacket and book case.  Dan Santat has designed a cityscape but includes certain childhood toys as elements; the alphabet blocks for the author name, the Etch A Sketch for his name and the Tinkertoys.  To the left, on the back, and over the spine the image extends.  More buildings can be seen with a large pinwheel reaching skyward like a modern-day windmill.

On the opening endpapers Santat begins his pictorial depiction with a skyline like dawn as Rodzilla stalks into the city wearing the TOTALLY ROD t-shirt, big grin stretching across his green face.  The closing endpapers extend the story into the next possible episode. The verso and title pages show us the entrance to the city with the tail of Rodzilla providing space for publisher information on the spikes.  Rendered in watercolor, pencil and Photoshop most of the illustrations span two pages.

To portray points of a shift in the action smaller pictures are grouped on a single page, unframed and framed opposite single-page pictures.  The full color visuals with varying perspectives fully fascinate readers with the inclusion of large sound effect fonts.  The huge image covering two pages of Rodzilla's possible downfall is spectacular.  The expressions on his face and those of the townspeople (and nearby critters) will have readers unable to contain grins and giggles.

One of my many favorite illustrations is when Rodzilla is on the move again, as big as and even better than before.  A blue sky background fades to golden near the bottom of the page as lines of sound radiate from the monster's body, his stomping taking him close to the city center.  Legs lifted and arms moving in rhythm, his eyes are closed in concentration and his mouth a line of determination.  Cars are pushed aside and airborne.  People are fleeing, screaming and grimacing in fear.  The point-of-view is masterful (as it is in all the pictures).


You can be sure you will be hearing a chorus of read-it-again over and over once your listeners have heard the words and seen the illustrations in Rodzilla written by Rob Sanders with art by Dan Santat.  It's a scenario familiar to many so there will be loads of laughter.  You will want a copy on your professional and personal bookshelves.  This duo is a winning combination.

To learn more about Rob Sanders and Dan Santat and their other work please access their websites by following the links attached to their names.  You can view several interior images at the publisher's website.  Rob Sanders is interviewed at Writers' Rumpus.  Dan Santat is interviewed by teacher librarian and blogger Travis Jonker at 100 Scope Notes, educator Dylan Teut at Mile High Reading and by Connie Hsu at The Horn Book.  Educator Colby Sharp, a man wearing many hats in the kidlit community, mentions this title in a post on his blog, sharpread, 2017: The Year of The Picture Book Read Aloud .
Posted by Xena's Mom at 12:17 PM