There are days when you crave great gulps of it.  It's an elixir for your soul.  You need it like your body needs air. It can come over you spontaneously or build until it bursts out in the open. 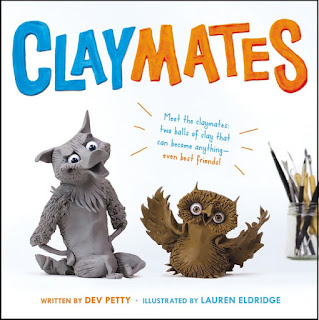 Whether it's a snicker or a shriek, laughter is contagious.  It's a rare person who hears it and does not feel at the least, a hint of a smile forming.  Claymates (Little, Brown and Company, June 20, 2017) written by Dev Petty with illustrations by Lauren Eldridge is certain to send spirits soaring.  There will, without a doubt, be a great deal of roaring...with laughter.

What do you think is going to happen?

Two balls of clay, one gray and the other brown, are calmly chatting and getting to know one another when an artist approaches the studio table, forming them into a wolf and an owl.  The twosome is thrilled when they are left alone again.  Owl thinks they are perfect.  Wolf has other plans.

Faster than you can say ears, it stretches them to look like airplane wings.  Owl is flabbergasted predicting doom and gloom at Wolf's antics in altering its appearance.  Finally after persistent prodding, Owl tries it.  Yahoo! Where did Owl go?  And what is in its place?

Like caged creatures set free the duo are an explosion of creativity.  When one becomes something new, the other complements it.  They progress from imaginative creatures, to things out of this world, to bigger, smaller, flatter and sharper.

The artist's jar of tools is fair game for these companions as they merrily make and remake themselves until the inevitable happens.   They hope their fast thinking solves their current predicament but the outcome generates full-blown hilarity.  For a third time they find themselves alone.  And as it is said, the third time is the charm.


Told entirely through the conversations between the two balls of clay, this story instantly captures your undivided attention and keeps it until the final syllable is uttered.  Dev Petty's keen sense of humor resonates in each word.  It's delightful to see how she plays one personality against the other until doubt is dispelled, replaced with exuberant play and the roles come full circle.  Here is a sample conversation.

You definitely shouldn't do that.

You look like
you're going to get
us in trouble.


It's a given you will start to giggle as soon as you see the matching dust jacket and book case.  Lauren Eldridge in this title, her debut picture book, demonstrates her masterful use of clay, found objects and photography.  The color choices for the text and the white background assure your attention will be directed at the characters.  You know the wolf and owl are as happy as can be but you are not sure why until your eyes drift left at the back.  A gray elephant is now holding a giant brown peanut in its trunk.  Off to one side you can see a portion of the studio table with other balls of clay ready to be used.

On the opening endpapers we get a clear view of the entire studio, including the table and photography space. What an introduction to possibilities!  On the closing endpapers with the publication information, author's and illustrator's notes and dedications it's the same area with noticeable differences.  (I'm laughing again.)  On the title page we zoom in close to the characters and bowls holding balls of clay.  The title letters formed from clay are spread across the top of the two-page picture.

polymer clay, acrylic doll eyes, tinfoil, and wire to create the many shapes of the gray and brown claymates and using objects from around my (her) house

Lauren Eldridge fashions a series of images on white or framed in wide bands of white.  She might include two illustrations on a single page, a single picture on one page, a wordless collage of visuals or a close-up spread across two pages.  Her choice of size directs the pacing and heightens the narrative.

The conversations are shown on torn pieces of paper with text color to match the character's color. What Lauren does with their eyes is fabulous! You know exactly what they are thinking and feeling.

One of my many favorite illustrations is the first two-page spread.  The wolf has just pulled its ears out making them longer.  Its eyes and mouth are wide open with its tongue hanging out as it exclaims

Owl on the right is shocked with wings askew, one tip pointed toward its chin.  The eyes are as wide-open as Wolf's but not for the same reason.  Owl says


You can't read this title, Claymates written by Dev Petty with illustrations by Lauren Eldridge, only once.  You have to read it again and again.  And, this is the best part, even though you know what is going to happen you laugh louder and longer with every reading.  I love this book!  I already have more copies on the way.  I would plan on multiple copies for your professional and personal bookshelves.

To discover more about Dev Petty and Lauren Eldridge and their other work, please visit their websites by following the links attached to their names.  The exclusive cover reveal along with an interview is at teacher librarian Travis Jonker's blog at School Library Journal, 100 Scope Notes.  The book trailer was premiered at Scholastic's Ambassador of School Libraries, John Schumacher's blog, Watch. Connect. Read.  He chats with Lauren Eldridge.  Lauren is featured at Celebri-Dots.  Dev Petty talks about this book at Nerdy Book Club.  Enjoy the video.

Book Chat with the CLAYMATES Creators from LB School on Vimeo.
Posted by Xena's Mom at 11:48 PM