In Pursuit Of A Companion

Being alone does not necessarily mean you are lonely.  You may welcome the solitude.  In fact loneliness may descend when you are part of a crowd.  Loneliness may have more to do with not being in the presence of like-minded individuals. 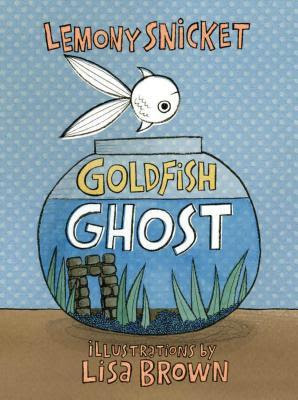 If your circumstances have recently changed placing you in new surroundings the unfamiliarity may throw your state of being off balance.  Goldfish Ghost (A Neal Porter Book, Roaring Brook Press, May 2, 2017) written by Lemony Snicket with illustrations by Lisa Brown follows the roaming of a recently deceased pet.  His sense of belonging left with his life.

Goldfish Ghost was born on the surface of the water in a bowl on the dresser in a boy's room.

Although he was used to being in this place, someone to talk to would be even better.  So he left, floating from the boy's home.  A small seaside town with the usual small stores, a beach, a fishing pier and a lighthouse spread before him.  It was said the lighthouse was haunted.

There were squawking gulls at the pier and a fisherman but none of them seemed to notice Goldfish Ghost.  He continued drifting to town on the air currents.  He passed over all shapes, sizes and ages of people and animals but he was invisible to them.

It was no different at the beach.  Even the ghosts of all the sea dwellers floating over the water did nothing to make Goldfish Ghost feel less unwanted.  Having nowhere else to go after the sun set, he went back to his bowl in the boy's bedroom.  There was another goldfish there, a living goldfish.

Goldfish Ghost left a second time.  As he glided over the rooftops, he heard a sound.  Someone was speaking to him; someone wanted him.  Sometimes what you need is right in front of you.  You only have to expand your vision.


With his opening sentence Lemony Snicket has our immediate attention.  Before we turn the page questions are swirling as to the current status of this goldfish.  In a calm, contemplative tone the story informs readers of the character's wish to

In describing each place Goldfish Ghost visits during the day and upon his return back to his bowl, we come to understand his need for a specific kind of companionship as well as the difficulty he is encountering in his search.  (In the initial presentation of the town, readers are given a hint of the conclusion.)  The repetition of the words company and good company creates a gentle cadence in keeping with the overall symphony of this story.  Here is a sample passage.

Another goldfish was there, but she was not a ghost.

She seemed nice enough, but she was not
good company, and the moon called
Goldfish Ghost back out the window.


On the dust jacket the blue on blue polka-dot background is the wallpaper in the boy's bedroom, home of Goldfish Ghost.  By giving him a distinctive white color, it helps readers identify the other ghosts yet to come.  To the left, on the back, the canvas continues over the spine.  There we see memorabilia hanging on the wall, a pennant, a hand-drawn picture of the goldfish and a snapshot of the lighthouse.  A can of fish food sits on the table.

Rendered in India ink and watercolor on paper the illustrations have a soft, peaceful quality.  Subdued, earth tone colors on matte-finished paper contribute to this impression.  The visual narrative begins with a scene of the boy's home by the sea, a window giving readers a view of the fish bowl.  A sea gull perched on a hill to the left screams.  (I am working from an ARC but I believe this to be the opening endpapers.)  At the back we are shown a more panoramic view of the village at night with a full moon, a few stars and the group of ghostly sea dwellers hovering over the ocean.

The two pages for the verso and title are a single image.  It is a close up of the inside of the bowl with Goldfish Ghost floating over the text on the right.  An interesting quote wraps around seven bubbles coming up from the bottom of the bowl on the left.  All of the illustrations except for two are double page, edge to edge.  Those two single page pictures will give you pause.  They are gorgeous.

The details in each of the illustrations ask you to stop and notice the references to children's literature, the community, the locals and the tourists.  Readers will love finding the titles on book spines, watching the eyes on the teddy bear, spying the cats, the open door of the pet shop and the recent patron, and the seagull at the beach stealing someone's lunch.  The place where Goldfish Ghost finds good company gives him a new life as shown by the golden glow.

One of my favorite of several pictures is when Goldfish Ghost has left the house the second time.  It is deep into the night.  A few upper story windows in town shine with light but the others are dark.  The cloud of ghosts from the ocean lingers over the water.  Goldfish Ghost is drifting toward the voice, up on the hill.  A full moon shines down on the scene.  A hint of the outcome is visible.


Having read this book repeatedly over the course of weeks, I find Goldfish Ghost written by Lemony Snicket with illustrations by Lisa Brown to be deeply satisfying.  For those readers who have lost pets or recently family or friends, this title will provide them with comfort.  Some of the words spoken by Lemony Snicket invite further discussion as do the illustrations of Lisa Brown.  This is an outstanding collaboration.  You need to have this title on your professional and personal bookshelves.

To discover more about Lemony Snicket and Lisa Brown and their other work, please follow the links attached to their names to access their websites.  The publishers have created a special site for this title with numerous additional resources and views of interior images.  I hope you enjoy this video of Lemony Snicket and Lisa Brown on tour for the book as much as I did.  It's worth every minute of your time.