During the 2015-2016 school year I was fortunate to work with a group of kindergarten students. Visiting them once a week, introducing them to authors, illustrators and the joy of appreciating not only the stories they told but how they accomplished their work was memorable.  As a thank you for our time together they wrote a book for me.  In it are letters of gratitude. 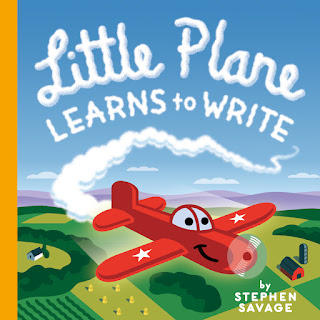 These letters are one of my greatest treasures because in my years of education I have had the opportunity to watch students learning to shape letters and string them together to make words.  When they are able to do this their happiness is huge.  Little Plane Learns to Write (A Neal Porter Books, Roaring Brook Press, June 6, 2017) written and illustrated by Stephen Savage takes readers on a journey of practice makes perfect.

It was time for class at flight school.

Little Plane could hardly wait to begin.  Their flight instructor told them about their new lesson.  They were going to learn to write.

Practicing arcs, dives and loopity-loops was important to their success.  Little Plane zoomed into the air.  Completing arcs was no problem.  The loopity-loops were not so easy.  They made him feel upside down and inside out.

He tried his best the next day but writing about clouds was minus an o.  Of course the flight instructor noticed the omission encouraging him to try again.  Little Plane gave it his best effort but again his next word lacked an o.

As the day darkened into night, Little Plane was deeply discouraged.  The night was partly cloudy.  As the clouds moved across the sky a glowing revelation gave Little Plane an idea.  With great care he flew.  His happiness was huge.


When Stephen Savage writes for our younger readers he speaks directly to their collective hearts and minds.  His sentences are simple and easily understood but still convey emotion.  His careful use of words allows us to connect to his characters.  This story becomes a bit more personal with the inserted dialogue by the flight instructor.  Every single one of us understands the struggle to learn to write and form words.  Every single one of us needed (needs) support.  And it's surprising, as Stephen demonstrates, when that support will appear.


Two dots and two curved lines give readers all they need to know about the mood of Little Plane as he flies over the countryside beneath him.  He has just completed writing the text for the title and could not more thrilled.  His red hue conveys warmth in beautiful contrast to the predominant use of primary colors throughout the book .  To the left, on the back, the canvas shifts to all sky blue.  Within a circle of yellow is a lighter blue.  Little Plane is flying out of the circle, a large grin on his face.

Readers are going to love the opening and closing endpapers.  Little Plane along with the other students have written the upper and lower case letters of the alphabet between the two images.  A through M is on the first and N through Z is on the second.  The background shifts in shades of blue to delineate the passage of time.

Digital techniques created the illustrations which all span two pages.  Stephen's use of line, shadows, light and shapes is ideal for the intended audience.  He alternates smoothly between panoramic and close-up views.  They contribute to the sensory impact.

One of my many favorite pictures is when Little Plane is trying a second time to get his loopity-loops to form.  The lower two-thirds of the page is a cityscape with a bridge in the background on the left.  Over the right side of the city is a large rainbow.  Above this the word is correctly spelled without an o.  Little Plane is flying away glad with what he has accomplished even without the o.


Little Plane Learns to Write written and illustrated by Stephen Savage is an ode to learning and persistence.  It also shows how students learn differently and at varying rates.  I predict this book is going to be requested repeatedly by readers as a read aloud one-on-one or as a group.  You will want to add this title to your professional and personal collections of Stephen Savage books.  It's a definite winner.  (Can you guess which letter the students who wrote to me struggled with the most?)

To learn more about Stephen Savage and his other work please visit his website by following the link attached to his name.  To view interior images of this book please view them at the publisher's website.  Stephen is interviewed at Where The Board Books Are and BKLYNER.  This book is one of those featured by author, reviewer and blogger Julie Danielson at Seven Impossible Things Before Breakfast.  Stephen Savage had the distinct honor to be selected as the Irma Black and Cook Prize ceremony keynote speaker on May 18, 2017.
Posted by Xena's Mom at 11:51 AM