For more than a year two people have exchanged messages by mail, email, almost daily.  These letters are written and sent in the morning.  They are a way to stay connected, to gather thoughts about each day, to set goals, rejoice in accomplishments and to chronicle events.  They are a way to understand each other's likes, dislikes, and personalities and to grow a friendship.  These two people realize the value of written communication, the art in selecting the right words. 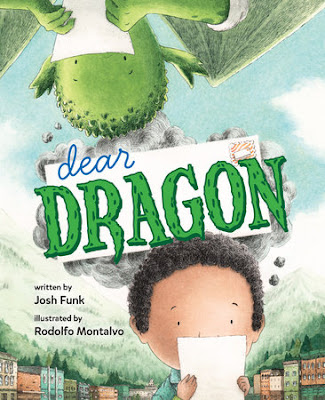 When you know you will be sending and receiving mail, there is a special kind of anticipation.  If you have not met the party in real life or are beginning a new relationship the air of mystery magnifies the excitement.  Dear Dragon (Viking, September 6, 2016) written by Josh Funk and illustrated by Rodolfo Montalvo is a delightful, epistolary adventure.

Hello, students!
Our poetry and pen pal projects
this year are combined.
Upon your desks you'll see the pen pals
that you've been assigned.

Two classrooms, with students completely unaware of each other, are beginning to practice their written rhyming skills.  George Slair and Blaise Dragomir have been paired as pen pals.  Although both admit to not liking writing, as readers we are immediately aware of the differing viewpoints of the boy and the dragon.  Words have very distinct definitions for each of them.

When Blaise mentions skydiving George imagines himself jumping from an airplane, parachute open, googles over his eyes and arms and mouth open in complete abandon.  For the dragon his favorite sport, skydiving, begins after jumping from Falcor Peak spreading his wings and cruising over the countryside.  When George mentions he is going out trick-or-treating in a knight costume, Blaise is decidedly less enthusiastic.

As the new year ends and another starts, the formality in the exchange of letters is dropped.  Blaise Dragomir becomes Blaise D.  George Slair is changed to George S.  The duo is becoming more comfortable in their conversations by letter.  The word confusion continues as they each believe they are writing to the same kind of individual.

George's curiosity is peaked when Blaise mentions his father has won the fire-breathing contest twice.  What kind of job does he have?  His parents are teachers.  Blaise's reply conjures up a scene in George's mind far from the truth.

As the school year comes to a close, so does the pen pal project.  A greet-and-meet picnic is planned.  By the changes in the letters it's clear the twosome have ideas of their own.  Can you imagine what will happen at the picnic?  Oh, those two teachers are certainly clever.


As he did in his debut title, Lady Pancake & Sir French Toast, Josh Funk spins a lively tale with his word selections.  His rhyming is never forced but full of fun.  Each correspondence is written in the mindset of the characters, appropriate to their ages.  Their talk of building forts, sports, skydiving, flying, and pets (one has a dog, the other a Bengal kitten) and favorite subjects in school is totally typical even if their perceptions are in complete contrast.  This provides continuous comedy.  Here is another sample passage.

You know how to skydive?  That's
as awesome as it gets!

My dog destroyed my fort last
night.  Do you have any pets?

Happy birthday, by the way! I
don't have mine till June.

I'm trick-or-treating as a knight.
We're heading out real soon.


Looking from left to right Rodolfo Montalvo has presented to readers a panoramic view of buildings in a community surrounded by mountains on the dust jacket. (I am working with an F & G.)  The placement of George among the buildings with Blaise upside down above him in the sky is perfection.  To the left on the back a portion of Blaise's tail is holding the envelope for the opened letter he is reading.  The envelope holding the title text in George's thoughts is a foreshadowing of the depictions to follow.  Another two-page spread spans the title page.  George is walking along a picket fence reading a letter.  Above him Blaise is also reading as he flies over the town in the opposite direction toward the mountains.  George's dog, right next to a fire hydrant, is looking up.

Rendered in watercolors, black acrylic ink and graphite the images prior to and after the letters all span two pages.  Every line and brush stroke conveys emotion; especially in several wordless illustrations.  For each letter being read Montalvo has placed a viewpoint with a thought bubble over the reader's head.  On the opposite page with no framing is the intended picture.  The expressions on Blaise's and George's faces are fully animated.  The details in each visual are spirited and humorous; George's dog tugging on his knight's cape, the water faucet in Blaise's bathroom in the shape of a dragon's head, the wallpaper in George's bedroom, and the "face" on the excavator.

Two of my favorite illustrations are when George gets the letter from Blaise stating his father has won the local fire-breathing contest twice.  The letter George is reading has three singed corners.  In his mind a performer clothed as a daring, caped prince breathing fire is placed in a thought bubble of darkened smoke.  On the opposite page in swirls of fire Blaise's father is roaring out flames as he happily watches.


Dear Dragon written by Josh Funk with illustrations by Rodolfo Montalvo is an energetic exploration of letter writing, rhyming and misplaced notions.  Readers and listeners are sure to grin and giggle more than once at the contrast between the ideas held by the boy and the dragon.  You might want to have paper, pencils and pens along with envelopes ready for use after reading this gem aloud.  I would recommend pairing this with Herman's Letter, A Letter For Leo and It Came In The Mail.


To learn more about Josh Funk and Rodolfo Montalvo and their other work please visit their websites by following the links attached to their names.  Josh Funk has some extra goodies for this title at his website.  Josh also wrote an article about this book at the BNKidsBlog.  The dust jacket is revealed at educator Jen Vincent's Teach Mentor Texts.  At All The Wonders there is a book cover premiere and an interview with both Josh Funk and Rodolfo Montalvo.  The book trailer is celebrated at the Nerdy Book Club.  Educator Gigi McAllister highlights this title and interviews Rodolfo Montalvo at The Late Bloomer's Book Blog.  Josh Funk is highlighted on teacher librarian Laura Given's blog, LibLaura5 here and here.
Posted by Xena's Mom at 1:12 PM