Out Of Confusion...A Job Well Done

On Fridays all kinds of trucks rumble through our neighborhood stopping and starting from home to home.  For one particular company there is a truck for recycling, a truck for garbage and a truck for yard waste; all arriving at different times during the day.  As you would expect the design and mechanics for each of them is different; each one has a very specific job to do. 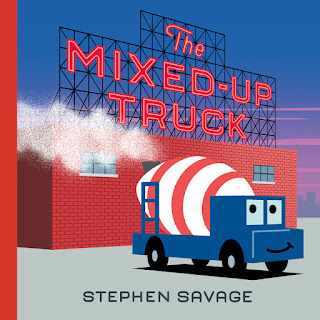 On January 11, 2016 for a most distinguished beginning reader book, Supertruck (A Neal Porter Book, Roaring Brook Press, January 6, 2015) written and illustrated by Stephen Savage received a Theodore Seuss Geisel Award Honor designation.  In a companion title to be released on July 5, 2016 Stephen Savage gives readers The Mixed-Up Truck (A Neal Porter Book, Roaring Book Press).  The new kid on the lot has much to learn but teaches too.

It was cement mixer's first day on the job.

When he arrived another trio of trucks was already working at the site.  One was using its crane to lift.  Hydraulics allowed the second to dump a load from its bed.  An extended scoop helped the third to dig.

Of course, the mixer wanted to help as quickly as possible asking what needed to be done.  They told him to do what he does best with some

Off the newbie went in search of the white powder.  He found some and mixed it with water.  It did not produce concrete.  He made a cake!  What was that stuff?!

Encouraged to try again, he found more white powder, put in some water and well...let's just say the cake was now wearing a new topping.  Whizzing away in search of cement, the mixer tried again.  This time, the third time, was, as is said, the charm.  As the sun sets his construction colleagues were more tired than joyful at his accomplishment.

The mixer, even though this was his first day, knew his work was not done.  As the trio rested, he sped away again.  This time the white powder he mixed with water lifted everyone's spirits.  Sweet dreams, good trucks.


Few words, carefully chosen, by Stephen Savage spin a narrative easily understood by the youngest of readers.  With single sentences we learn about the specific jobs of the other trucks. Together they tell the mixer what to do three times using the same phrase creating a cadence for readers.  In a single sentence the mixer completes the action required with the same final word each time.  It's a back and forth beat which invites reader participation.

The word But gives readers pause at the end.  This time the mixer is on his own.  He has learned from his day of work.  His final fill of white powder will have readers giggling with glee.  Repetition of the words mixer, mixed and mix is important throughout the story, too.


Stephen Savage's signature style is evident on the dust jacket (working with an F & G).  The wide red spine is the same as on Supertruck.  (Those not familiar with the Brooklyn, New York, skyline, should make note of the tribute Savage pays to the iconic Kentile Floor sign throughout the title.)  To the left on the back within a background of the mixer's body color, a bold blue, a smaller circular picture has been placed featuring the smiling mixer.  On the title page the smoke from the mixer's stack becomes the canvas for the title text in the same rich red as the stripes on our protagonist's body.

Most of the illustrations span two pages.  Savage has paler colors and elements in the background so readers' eyes go toward his characters and the mixer's creations.  Each time the mixer approaches a building to get the powdery white cement the perspective and the building's design change but the sign signifying what he is getting remains the same as the font styles and words differ.  The color of the text on all the signs stays red, just like the letters on the Kentile Floor sign.

The time of day is evident in the background colors moving from morning to noon to sunset and evening and nighttime.  There is warmth and happiness in all of the illustrations noticeable in the facial expressions specifically of the mixer.  Nothing is getting this guy discouraged.  That he has earned a spot in the garage at the end of the day is apparent on the four smiles we see in the next to last visual.  (I love that picture!)

One of my many favorite illustrations is when the mixer finally arrives at the right building to get the cement powder.  The center of the building, a tall tower, is strategically placed along the gutter.  Behind the building a closing-day sky is glowing.  On top of that are bright yellow rays of the setting sun stretching from left to right across two pages.  He is busy chugging away as smoke moves behind his truck.  He is looking right at the reader and smiling.  Readers can see, as we have all along, the correct word on the sign, CEMENT.


The Mixed-Up Truck written and illustrated by Stephen Savage is a true gem.  It's been read aloud to a group of kindergarten students who enjoyed it from beginning to end and wanted to read it again.  You could feel the anticipation in the air as the word on the sign at the building was read and they waited for the page turn to see what he would make with the incorrect powder.  This is an adorable tale about fulfilling your purpose, never giving up and going the distance even when your companions are too tired to offer suggestions.  Thank you Stephen Savage for another winner!

To learn more about Stephen Savage and his other books please follow the link attached to his name to access his website.  You can view four interior images at the publisher's website.  This title is mentioned by Travis Jonker, teacher librarian, 2014 Caldecott committee member and blogger at 100 Scope Notes, in a list compiled by Reading Rockets, Summer Reading 2016, in a post/interview at Scholastic's Ambassador for School Libraries and 2014 Newbery committee member John Schumacher's blog, Watch. Connect. Read. and at School Library Journal's SLJ's June 2016 Popular Picks.  Stephen Savage is interviewed at Where The Board Books Are.
Posted by Xena's Mom at 4:28 PM