If These Walls Could Talk

Probably at one time or another you've walked into a room thinking to yourself or aloud, "if these walls could talk" what tales would they tell?  From a historical perspective think of the unknowns which would be revealed.  On a more personal level if the walls had the ability to speak; perhaps we would locate missing items much more quickly.

Most educators in my circle of colleagues leave their classrooms prior to summer break ready for the first day in September when classes resume.  New colorful and relevant posters, banners and bulletin boards are placed on the walls ready to greet students.  Displays of books are placed around the rooms.  Seating is rearranged based on best practices.  For my part I do all these things plus a yearly inventory; this helps me to weed annually and remember the depth and breadth of my collection.  It refreshes my lessons and gives me ideas for new approaches to curriculum. 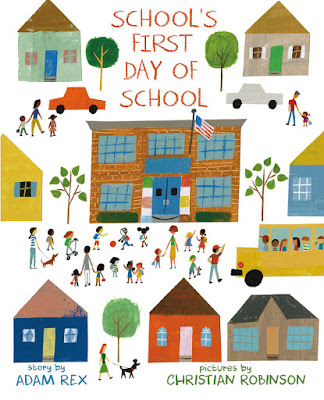 During frequent summer visits to the building to insure all new materials are ready for students and staff on the opening day; greetings are exchanged with the custodial employees hard at work.  School's First Day Of School (A Neal Porter Book, Roaring Brook Press, June 28, 2016) written by Adam Rex with illustrations by Christian Robinson is a fresh perspective on getting ready for and participating in the activities of the first day.  It's not only humans who might have the jitters.

That summer, they dug up the big field, and poured the foundation, and set brick on top of brick until they'd built a school.

The school was called Frederick Douglass Elementary.  The school thought this was a fitting name.  Yes, this story is told from the perspective of the new school.

Initially the school chatted with a man named Janitor but he advised the school of the upcoming first day when the building would be brimming with all kinds of children.  This was worrying to the school especially when learned Janitor would only be there after the day was over.  On the first day the sheer numbers were nearly overwhelming.

As the children used the building and enjoyed the playground, the school learned new things.  The school experienced sadness when listening to cranky bullies.  (He did regretfully retaliate.) One particular child upset the school even more.  She had to be carried into the building.

A surprise fire drill, cafeteria chuckles, kindergarten lessons and time for art further fascinated the school.  In an end-of-the-day conversation with Janitor, school had a request which will make readers smile at Janitor's answer.  As the sun set, gratitude full of promise closed the story.


This innovative approach to the first day of school by author Adam Rex will increase readers' sensitivity to their fellow students.  The blend of narrative, the school's thoughts, comments and conversations with Janitor ask us to examine what we do in the course of our day.  By focusing on the kindergarten students doing everything for the first time, the school (and readers) become intimately part of the overall experience.  Here is a sample passage.


Across the back and front, left to right, of the matching dust jacket and book case on a background of pristine white (which is used superbly within the book), Christian Robinson presents to readers a vibrant multi-ethnic community with buildings of all shapes and sizes with the school at its heart.  What is most pleasing about this first look at the book is the color palette and the shapes employed.  It calls to children and those who still value their child's heart.  I can't help myself; looking at Christian Robinson's illustrations rendered in acrylic paint and collage techniques I feel joy.

For the opening and closing endpapers Robinson chooses to change the background to brushed black.  This choice, like the white, draws our attention to his use of primary and secondary shades.  The heavier lines are in white outlining all the playful points on the playground.  Prior to the beginning of the narrative, Robinson starts the story visually with the machinery and crews building the new school across the verso and title pages.

With a few exceptions all of the pictures span two pages.  Even inanimate objects look alive in the capable hands of Robinson; the front of the school appears to be smiling.  As you get closer to the school in some images five panels on either side of the door are decorated with child-like mosaics.  Impeccable layout and design draw our eyes into the visual story.  Extra details like the time on the wall clocks, the inclusion of a READ poster in the library and the potted plants on the school's roof add warmth and authenticity.

One of my favorite illustrations, other than the fabulous endpapers, is the two-page picture of the front of the school prior to the first day.  My first thought upon seeing it was, who wouldn't want to go to this school?  I love the stylized trees and shrubbery!  Robinson brings us in for a close look at the door panels and inside one of the classrooms.  All of the elements and the colors work together in complete harmony.


School's First Day Of School written by Adam Rex with illustrations by Christian Robinson is fabulous!  Is it September yet?  Although as stated by author, reviewer and blogger Julie Danielson at Seven Impossible Things Before Breakfast and Kirkus, it can be enjoyed any time of the year by all ages.  You had better plan on multiple copies in your school libraries and classrooms; this is going to be requested repeatedly.

To learn more about Adam Rex and Christian Robinson, please stop by their respective websites or Tumblr pages by using the links attached to their names.  The publisher's website has four interior images for you to view.  Here is the link provided by the publisher to an activity kit.


School's First Day of School, my new book with Christian Robinson, is out today! Here's one of my favorite spreads. pic.twitter.com/TbphVhjxvU
— Adam Rex (@MrAdamRex) June 28, 2016