Nearly every evening it was a routine during dinner.  Looking to make sure my mom was preoccupied, my dad would pick up a piece of food with his fingers. Inevitably my mom would catch him in the act exclaiming "Use your fork!"  Dad would laughingly reply "Fingers were made before forks!"  We would all laugh despite the fact we had heard this so many times we had lost count. 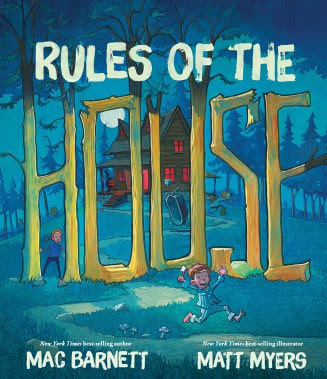 Even though my dad was able to do this, no one else dared to do the same.  If household "directives" were not followed, there were consequences; consequences of the variety insuring said "directives" would be followed in the future.  Rules Of The House (Disney Hyperion, May 3, 2016) written by Mac Barnett with illustrations by Matt Myers will have you rethinking your position on obeying rules.

Ian always followed the rules.
Here he is following the rule
ALWAYS PACK A TOOTHBRUSH.

Ian never falters in his steadfast adherence to what his family or society at large requires of him.  Ian's older sister Jenny is the exact opposite.  She takes particular delight in breaking the rule of not pinching.  OUCH!

The two are on their way with their dad to a large cabin in the woods to spend their vacation.  As the brother and sister squabble in the back seat, their dad reminds them of another rule,

The decor in the house is quaint and classic with an old potbelly stove, a claw-foot bath tub and a bearskin rug.  Ian loves all this stuff.  To his delight a set of rules, numbering four, have been left by The Management.  The last one states the red door is to be left unopened, ALWAYS.  Jenny agrees to comply but still calls Ian toady.

A variety of outdoor activities are enjoyed during the day but when inside the house Jenny breaks the first three rules with abandon and determination.  When Ian cautions her and chants his familiar phrase, Jenny snaps and...opens the red door.  HA!  Not one little thing happens. BUT when Ian and Jenny are all snuggled in bed, the fright comes into the night.

It's simply too scary for words.  Okay...okay...here are a few hints.  Someone is about to become an entree.  Did I mention monsters?  Another someone has to make decisions completely out of the ordinary.  Power to toothbrushes and to them who wield them!


With impeccable pacing and a masterful story arc, Mac Barnett has our attention from the very first page.  We are invited into the story with his wording as he makes statements and then demonstrates the veracity of each.  The trio of rules woven into this initial portion of the narrative is integral to the conclusion.

Barnett carefully creates the contrast between the siblings with a blend of text and dialogue.  You know something is about to change when you read two defining sentences at the close of the outdoor activities.  There is a shift in the atmosphere of the story.  It gets scary but not too scary after Jenny opens the red door.  Two short phrases speak volumes.  As readers' heart rates increase so does the tension in this tale racing toward the ending.  Here is a sample passage.

THE RULES OF THE HOUSE

Ian drew a deep breath and read out
the rules with gusto.


Appropriately inviting and scary the front of the dust jacket screams you have to read this book.  Artist Matt Myers incorporates the tree trunk letters into the landscape.  The fiery red glow from the inside of the house draws our attention to the animated items.  To the left, on the back, a single toothbrush is highlighted in a yellow star with the rule printed beneath it.  The book case, left and right, is the red door.  We are doomed as soon as we open this book.  A pale sea green is used for the opening and closing endpapers perhaps in reference to an eye color mentioned in the story.  The title page and verso images are the red door.  Opposite the verso Myers has the children jumping back in fear at something they have seen.  The stage is set.

The picture sizes and perspectives are altered to fit the mood of the story; each one creating a separate effect.  Myers places a smaller image within a large visual.  He gives us a bird's eye view of the day's fun, mapping it out before us.  This allows for the contrast in what is to come; those haunting (but not too haunting) scenes of the cabin after everyone has gone to bed, the awful encounters in the children's bedroom and the kitchen.  The background colors play a significant role also noting a change in the current conditions.  Myers' use of light and shadow works wonderfully.

One of my favorite illustrations is of Ian standing outside in the dark wearing his pajamas and carrying his toothbrush.  He is standing on a small hill thinking.  Evergreen trees are placed in the background with silhouettes of more trees behind those.  His head is framed in a full moon.


On the first reading of this book, Rules Of The House written by Mac Barnett with illustrations by Matt Myers, I thought---Gals and guys are going to love this book!  It's a fantastic combination of scary and fun.  Beneath the fast-paced action runs an exploration of rules; when to follow them and when to break them.