Seeking Truth On The Sea

You and a companion have seen the most amazing thing in the world.  You can hardly wait to get home to tell everyone and anyone.  When you relate your experience no one believes you.  If only you had been able to find your phone in time.  If only you hadn't dropped your brand new camera last week.  It's beyond frustrating when you can't share and spread the excitement you feel. 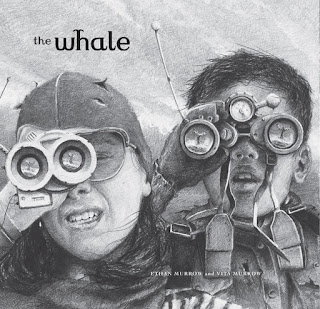 In their debut picture book, The Whale (Templar Books, an imprint of Candlewick Press, April 12, 2016) collaborative husband and wife team, Ethan Murrow and Vita Murrow pose a similar scenario.  Without benefit of words we sail the sea with two determined young people.  They each strive to seek the truth.  It is highly personal for both of them.

On August 28th fifty years ago, a girl and a boy were out fishing together.  Upon their arrival on shore they claimed a Great Spotted Whale came so close to their boat it consumed their fishing tackle.  Their only proof was a less than clear picture. Their names were never released because people believed their story was and still is a hoax.

Today in response to an open invitation in The Cape Chronicle, the local newspaper, a girl and a boy, are working separately but with determination to get to the truth of the fifty year old legend.  They each have designed boats with inventive detecting equipment to aid them in their search.  In spite of the advancement of Hurricane Betsy, they head out to sea.  During the course of their trip, the storm strikes.  Their boats rising and falling in the waves come together and CRASH!

They and their vessels, the worse for wear, fortunately wash ashore on a small island, Puffin Island.  A recently established observation platform will help them see what they have just heard.  Could it be the elusive Great Spotted Whale?  In the light of a full moon, their hearts nearly stop beating at the sight before their eyes.

Former adversaries, the two work as a team to build a boat from the wreckage.  They need to get closer to what they have seen.  As they sail over the waves toward their goal, they receive surprise after surprise.  As their voyage comes to a close, a welcoming group of people greet them as they slowly approach their home harbor.  On September 1st new headlines span the paper with yet another surprise for readers.

Rendered entirely in pencil the matching dust jacket and book case capture readers' attention immediately.  We know what the children are seeing in their binoculars by looking closely at the lens openings.  The texture in this first image we see is stunning in its realism.  The addition of the tiny whale tail on the h in the title is the kind of exquisite consideration we see in the entire book by Ethan Murrow and Vita Murrow.  To the left, on the back, beneath a full moon a whale tail slaps the surface of the sea.  A solid rich blue covers the opening and closing endpapers.

The Murrows begin the nearly wordless title with images of the present day boy and girl working on their inventive projects.  One has the newspaper article on their work station.  The other sees it as a billboard in their community by the sea.  The boy clearly focuses on sound; the girl on photography.  With a page turn we are given a close up view of the newspaper; articles recounting the past and present news.  These tidbits of information become the foundation for this tale; the springboard for this wonder in pictures.

As the action rises in the narrative we are brought closer to the children.  You can feel the swell of the waves, the shuddering impact of the collision and the relief as well as the frustration when they arrive on the island.  In a series of smaller images horizontally above two pictures on two pages, you can sense the keen anticipation and excitement.  The next two page spread is breathtaking.  Every line, the shading, and use of light fill these pages with emotion.  You want to smile joyously with the children as they skim the water toward their goal.  You will gasp repeatedly along with them as events unfold.

One of my favorite illustrations of many is of the boy working on his plans for his boat and the trip he will make.  We are looking above him and slightly over his shoulder.  A map and drawings are spread before him.  Boards with nails in them, and loose nails indicate he has been hard at work as he holds a hammer in his hand.  Off to the side is a bell.

Eloquent images convey a story spanning decades in The Whale conceived, written and illustrated by Ethan Murrow and Vita Murrow.  In this ode to inventiveness, perseverance and a true spirit of adventure readers young and old alike will find inspiration.  This is a book to be read and enjoyed over and over searching for more details and gaining additional viewpoints.

To learn more about Ethan Murrow and Vita Murrow, their work and their collaborative process please visit Ethan Murrow's website and their joint website by following the links attached to their names.  At these publisher's websites, here and here, you can view interior images.  At PICTUREBOOK MAKERS Ethan and Vita Murrow and this title are featured.  The process behind the creating of this book is completely fascinating.  Enjoy the video below. 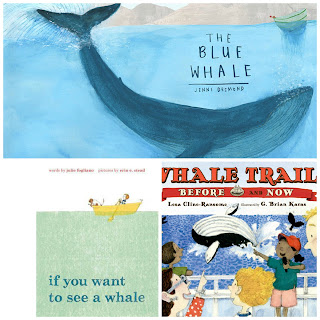 Readers could pair this title with other wonderful books about whales.  The Blue Whale (Enchanted Lion Books, May 26, 2015) , If You Want To See A Whale (A Neal Porter Book, Roaring Brook Press, May 7, 2013) written by Julie Fogliano with illustrations by Erin E. Stead or Whale Trails: Before and Now (Christy Ottaviano Books, Henry Holt And Company, January 20, 2015) written by Lesa Cline-Ransome with illustrations by G. Brian Karas. 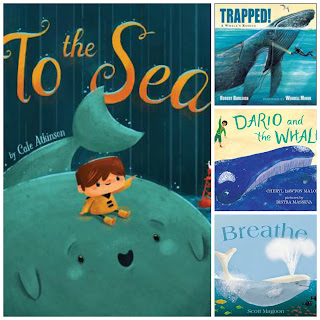