Courage With A Crown

Let's take a few moments to think about friends and friendship.  Let's pause to ponder how we each define the word friend.  This is a time for reflecting on the power and value of friendship.  In the course of this contemplation you might ask yourself to what lengths would you go for a friend? 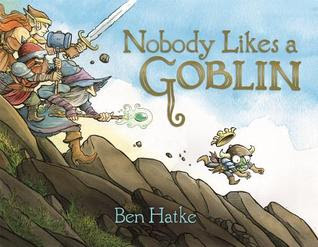 In the realms created by author illustrator Ben Hatke companions come in all shapes and sizes from real and his wonderful imaginary worlds.  In his newest picture book, Nobody Likes a Goblin (First Second, June 7, 2016) uninvited guests put this question to the test.  A small being is challenged by events to leave the place in which he is most comfortable.

Deep in a dungeon
the bats were sleeping soundly,
and Goblin woke to a new day.

After his daily routine which included rat feeding and boot chewing, he set out to chat with his Very Best Friend, Skeleton.  Skeleton resided in a separate room in the dungeon, the Treasure Room.  There the two counted, played and chatted.  On this day Skeleton invited Goblin to try on his old crown.

In the midst of their playacting, a frightening noise was heard.  Goblin took shelter listening for the silence signaling that the adventurers had left.  When he again descended to the Treasure Room, he discovered it empty of everything and everyone.  Skeleton was gone!  Without giving it a second thought a determined Goblin put on the crown.  He was going to get Skeleton back.

At his first stop, he discovered that his closest neighbor had also fallen victim to the band of thieves.  Warned by the troll, the intrepid traveler journeyed over hills, mountains and into farmland.  The first person he saw started chasing him right into another group who joined the race.  They ran him right into a wagon-load of treasure.  SKELETON!

The duo was off at a furious pace pursued by a long line of characters until they took solace in a darkened cave.  And now, dear readers, the plot, as they say, thickened.  They were not alone in that cave.  Goblin and Skeleton were off again!  But where to, I ask you?


While the sentences and dialogue are easy to understand, the subtle meanings woven into the plot are full of ancient wisdom.  Ben Hatke writes of honor associated with friendship, daring to step forth into the unknown, moving forward in the face of danger to oneself and of strengths found when least expected.  In a blend of narrative and dialogue, several particular moments in the cave set forth profound truths particularly about self-worth.  Here is a sample passage from earlier in the story.

ADVENTURERS WERE STORMING
THE DUNGEON!
They scared the rats.
They knocked over the torches.
They plundered the pantry.
Goblin hid under his bed until
they went away.


Rendered in India ink, Sakura Micron pens, watercolors, and assorted brushes on Arches 140lb hot press watercolor medium the illustration on the dust jacket (and those throughout the title) fashions a fabulous portrayal for readers.  Spanning from edge to edge across the back and then right to the front Goblin is racing for his life trailed by the adventurers three with the fourth on the other side of the spine.  Hidden among the rocks on the back are Goblin supporters.  (I am working with an F & G.) A light sage green provides the background for the opening and closing endpapers.  On the first of two title pages Ben Hatke has placed the title with a crown beneath the text.  Seated inside the crown is a rat.  The verso, dedication and title pages include a large image of the forest, hillside and pathway lined with stones to the entrance of Goblin's home beneath the ruins of a castle.

When Goblin and Skeleton are in the dungeon and later in the cave, Hatke places darkness around them with the focal image glowing in candle or torch light or limited daylight.  This not only brings our eyes to the characters but makes the situation more intimate.  It helps to create a contrast between the action-packed scenes versus the more contemplative, uplifting instances.

Readers will want to stop or go back and reread this story multiple times to look at all the details.  The facial looks, the attire worn by the characters, the dungeon residents, the dungeon decor, and the magical symbols will captivate you.  Who is the new character making an appearance outside the cave?

Two of my favorite illustrations are on a single page.  Goblin has just discovered Skeleton has been taken.  In the first in a glowing circle Goblin is placing the crown on his head.  Sheer grit is featured on his face.  In the second our perspective shifts from the bottom of the dungeon floor up many steps to the open doorway in which Goblin is walking through to the outside world.  To me this represents a great deal of courage.  Two rats at the bottom watch.


Nobody Likes a Goblin written and illustrated by Ben Hatke is a spirited search with multiple discoveries; life can be like that sometimes.  Friendship abounds in these pages, the kind that lasts beyond a lifetime. I would plan on multiple copies in your professional libraries and at least one for your personal bookshelves.

To learn more about Ben Hatke and his other work please follow the links attached to his name to access his website and his Tumblr posts.  At the publisher's website you can view eight interior images.  Ben is on Twitter at @BenHatke Enjoy this recent video production about Ben Hatke.