You laughed out loud repeatedly more than two months ago.  You read it again yesterday laughing even more than you did the first time.  As an adult you pause to wonder why, realizing readers of all ages will agree with you.  We share something in common.  We have all attended elementary school.  Most readers have had pets in their classrooms.  You know you are holding humor gold in your hands when this particular book is read. 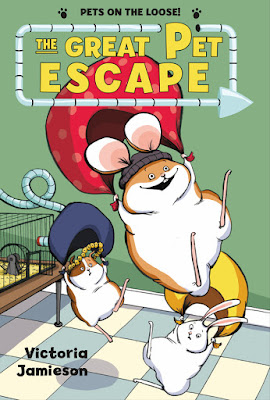 On January 11, 2016 as the American Library Association announced the Youth Media Award medal and honor award winners I was among those cheering long and loud for Roller Girl (Dial Books for Young Readers, an imprint of Penguin Group (USA) LLC, March 10, 2015) written and illustrated by Victoria Jamieson when it received a Newbery Honor award.  Along with many others, I was looking forward to her new graphic novel for the younger set (and those young at heart) with anticipation.  The Great Pet Escape (Pets On The Loose) (Henry Holt and Company, February 16, 2016) far exceeds expectations.

Three month,
two weeks,
and one day.
That's how long I've
been stuck in this
terrible prison,
otherwise known as...
a second-grade
classroom.

With these words found in the opening panels we are introduced to GW, George Washington, a hamster and his two friends, Furry Fiends, Biter, a guinea pig, now known as Sunflower and Barry a bunny.  The three reside at Daisy P. Flugelhorn Elementary School in separate classrooms.  GW is no ordinary hamster.  He is a first class inventor with a workshop in the wall behind his cage.  On the evening this story begins he is about to test out his Hairy Houdini Escape-O-Matic having acquired the final missing piece, a bobby pin.

The transformation of Biter, now called Sunflower is stunning...and hilarious.

After convincing Sunflower to join them in their escape, the trio is stopped in their tracks by a villainous voice.  Harriet, a fourth-grade pet, a mouse and her mice minions as well as Lucinda, a fifth-grade pet snake (more giggles and grins come with this addition) are not about to let the Furry Fiends leave.  Harriet and company have an evil plan to put in place.  Champions are born in the comedic chaos.


Told entirely through the thoughts of the hamster George Washington, his conversations and dialogue of the other characters, readers instantly join in the playful pandemonium created by the words written by Victoria Jamieson.  We barely have a chance to breathe we are turning the pages so quickly; anxious to see where her plot twists and turns gleefully take us.  The personalities of the characters are well-known to us as this episode concludes with the promise of more excitement in the future.  Here is a sample passage through a collection of panels.

Look, GW, there's something
you should know.  It's about Biter.

Barry has this habit of pulling
on his ears when he's nervous.

What are you not
telling me, Barry?

You know how Biter
was a bit of a ...
erm, tough case
when she came in?

"Boneyard Biter?  I'll say she was
something of a "tough case"!

Barry, pull yourself
together.  WHERE IS SHE?

She's...she's doing hard
time in the worst cell block in
this place.  Her jailers torture
her nearly all the time with stupid
songs and crazy behavior...


How can you look at the front of the matching dust jacket and book case and not expect loads of unexpected fun and laughter?  One glimpse of the threesome's faces tells a tale.  On the back, to the left, looking like a police file are vital pieces of information about GW, Biter, Barry and Harriet.  It's titled Classified Information, Property of Daisy P. Flugelhorn Elementary School.  The same tubing framing the title on the front points to the ISBN on the back.  A hue of the same color in GW's escape balloon covers the opening and closing endpapers.

Victoria Jamieson uses a full color palette for her pictures rendered in pen and ink and colored digitally varying her panel sizes to enhance her narrative.  Most of her square-shaped or rectangle-shaped images are framed in white.  She changes her pattern breaking through the frames with specific elements in key moments.  Wit spills from her pages in the facial expressions and body positions of her characters.  Readers need to watch the snake for extra smiles.

One of my favorite of many, many illustrations is when GW and Barry first see Biter in her prison cell (cage).  The change is remarkable as she sits on a pillow meditating with hanging lanterns behind her and candles burning on a low table.  She is wearing a wreath of tiny yellow flowers.  The expressions on GW's face and Barry's face are of sheer shock.


The Great Pet Escape (Pets On The Loose) written and illustrated by Victoria Jamieson is a book I will be recommending often.  I plan on including it in my giveaways for trick-or-treaters at Halloween this year.  We can never have enough laughter and this title delivers it abundantly page after page.

You are going to want to learn more about Victoria Jamieson and her other work.  Please follow the link attached to her name to access her website.  You can view eight of the first pages in this title by following this link to the publisher's website.  You will enjoy this recent interview at School Library Journal.  Here is Victoria Jamieson's thank you video after her Newbery Honor win.


I'm working on a way to combine adult coloring fad and my need to color a bunch of pages into a money-making scheme. pic.twitter.com/WXYuR5SXqB
— Victoria Jamieson (@JamiesonV) April 7, 2016

"THIS IS AN ART RAGE!" = text that should have gone with this panel. pic.twitter.com/S6zWiBAbQm
— Victoria Jamieson (@JamiesonV) April 7, 2016