Beware! One Could Be Lurking Near You...

You have probably been living under the notion they have vanished from the face of the Earth, never to be seen again.  Their skeletons have been found and now stand on display in museums.  Countless volumes examining everything there is to know about them line the shelves in libraries.  Children read those countless volumes retaining and conversing with others about details too numerous to count. 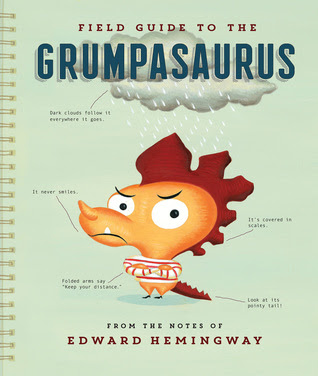 In fact it might be said these guys and gals are known to assume some of those distinguishing traits prevalent in those creatures they understand so well.  Field Guide To The Grumpasaurus (Clarion Books, an imprint of Houghton Mifflin Harcourt, June 7, 2016) From The Notes Of (written and illustrated by) Edward Hemingway describes what you can expect from close encounters with these critters.  I shudder to think what might happen.

Curious about the world's most fearsome creature?

The Grumpasaurus can be located by the storm cloud hovering overhead.  Its furious eyes and brow, perpetual frown, lack of heart (strange but true) and spiked tail are noticeable physical characteristics.  It is at its very worst after a complete catastrophe.

Just as you would bolt with due haste and batten down the hatches before a terrible storm do so when the Grumpasaurus becomes more frightful.  You should move as far away as possible.  The sounds it makes are deafening and said to rattle the windows from miles away.

There are certain adults, not children or animals, who will on occasion venture near this fearsome being.  They do not quake in terror but stand still with fortitude and patience.  When the Grumpasaurus's disposition reaches a breaking point, there will be only one thing left to do.  It's an activity many of the Grumpasaurus kind dread the most.  DO NOT MOVE CLOSER!

There might be one more way to dispel this extreme inclination.  If anyone so dares, it involves treating the calamity with care.  Don't stare but something has vanished into thin air.  Again...for the moment.


The narrative is designed as a naturalist's journal beginning with the introductory sentence on the title page.  Short descriptive sentences are linked to specific areas of the Grumpasaurus's body so we are well informed.  Between these labeled diagrams are conversational insights and warnings; while factual they will be inclined to produce smiles and outright laughter.  It is clear with the seamless flow of the story Edward Hemingway is an astute observer of this specie.  Here is a sample passage.

When it's done sulking, the Grumpasaurus will always seek out
the nearest adult, demand some attention, and get ready to
speak its mind.

You may want to plug your ears...


When opening the dust jacket you can more fully see the design of a spiral bound notebook.  The color palette here is used throughout the title as is the format for pointing out specific quirks of this being.  To the left, on the back, we are given the rear view of the Grumpasaurus with further conclusive characteristics.  The book case background is the rich chocolate brown seen in the spikes of this grouchy critter.  A darker brown is used along the wide spine.  To the right and left are cream-hued ovals.  The Grumpasaurus is in the first and to the left is the small black cat holding the trademark multi-hued umbrella.  When it rains or storms this comes in handy.

The opening and closing endpapers are done in two shades of blue.  Each is a reflection of the mood of the story at the beginning and at the end.  The title page welcomes readers into the guide with the dark cream-colored, lined paper of a notebook with the spirals along the left edge.  A pair of binoculars is placed between the title text and the introduction.  Many of the subsequent pictures are framed in a darker shade indicating wear and age of the notebook pages.

The images rendered in oils on panels portray the spirit of the writer documenting what is seen.  Each page turn, the verso, the dedication and thanks and the story itself truly give a sense of information gathering and exploring.  We are not quite sure what we will see next, but we can hardly wait to do so.  Hemingway alters his perspective depending on the mood of the Grumpasaurus.  The black cat companion is placed accordingly and also mirrors the emotional state of affairs.  This character's expressions are perfection.  (Only portions of the adult are shown which is wonderful.)

One of my favorite illustrations (I can hardly keep from laughing.) is when the Grumpasaurus is disgusted with the most recent activity.  Standing with hands on hips, the creature is wearing a red towel tucked around its waist.  On its head is a huge pinkish towel, acting as a turban.  The look on the Grumpasaurus's face is hilarious.  A trail of water behind it leads across the gutter and to the cat on the left.  This feline friend is looking a bit bedraggled and sopping wet.


If you should happen to come upon one of these creatures or wish to advise a group of listeners to be on the lookout for this disagreeable specimen, Field Guide to The Grumpasaurus From The Notes of Edward Hemingway is exactly the book you need.  This title allows us to examine ourselves for the possibility of shifting into this very thing.  You should expect giggles and grins, knowing nods and requests of read it again.

UPDATE:  Be sure to watch the book trailer featured along with an interview with Edward Hemingway at Scholastic's Ambassador for School Libraries, John Schumacher's blog, Watch. Connect. Read.
Posted by Xena's Mom at 11:35 PM