There are big ones.  There are small ones.  Some are easily remedied.  Others are pretty tough to figure out.  Most days will have at least one or maybe two.  Other days are brimming with them.  (You want to rewind those kinds of days and start all over again.) 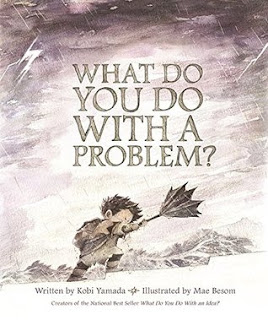 Those tough ones to solve can hang on for weeks or even longer.  Following the success of What Do You Do With An Idea? (Compendium, February 1, 2014) author Kobi Yamada and illustrator Mae Besom have collaborated to present to readers another thoughtful title.  What Do You Do With A Problem? (Compendium, July 1, 2016 but released earlier) is perfect as a picture book for younger readers but the story, like most picture books, is for all ages.

I don't know how it happened,
but one day I had a problem.


Like almost everyone our protagonist was not happy one little bit with having a problem.  The child is at odds with the fact the problem follows him everywhere.  He is certainly not sure how to handle it or to make it go away.  This problem is sticking to him like a second skin.

When dilemmas linger, we all tend to start to worry.  So did the child.  He imagined it's hungry for him, ready to gobble him up.  It became a monster ready to destroy all he valued.  Worry filled the child from the tip of his toes to the top of his head.

No matter what the child did the problem was there, getting bigger and bigger.  It was huge!  It saddened him to the depths of his soul.  It had him cornered.

The child decided to stop fleeing, turn around and hinder this quandary; needing to get back his happy self.  He formed a strategy.  Following through on this plan was probably the most courageous thing he had ever done in his short life.  What the child found was not expected but it altered his outlook for the rest of his life.


Told using the simple logic and language of a child, Kobi Yamada allows readers to see the essence of a problem from beginning to end as it unfolds.  We can readily identify with what the child is saying; having experienced similar situations.  The brilliance is in the conclusion.  It's a change in thinking and attitude explained with absolute clarity.  Here is a sample passage from the book.

And the more I worried, the bigger my problem became.


Upon removing and opening the dust jacket you can see a grand expanse of a storm buffeting the child from the back, left, to the right.  This is the way Mae Besom has chosen to illustrate a problem.  On the book case a background of purple gray, storm cloud color, covers the back and front.  The only image is the child from the dust jacket in gold foil on the front.  The identical opening and closing endpapers show a compass rose moving across a pattern of wheat fields, leaves, waves and clouds.

The interior pictures initially show the child in a limited color palette walking through a seaside village.  As the problem grows it occupies a larger area of the page.  Most of the illustrations span two pages.  The visual for the text noted above is a close-up of the child, eyes closed, fists to his face.  As the storm roars around him several animal companions join him.

Details in all the images abound.  Inventiveness plays heavily into the solutions employed.  As a resolution is reached the colors shift with golden overtones and more full color.  There is a sense of peace, satisfaction and an eagerness to seek new adventures.

One of my favorite illustrations is of the child at work in his bedroom.  To the left of the child is shelving overflowing with collections and books.  The work surface is a mass of toys and gadgets.  Leaning over the table the child is intently drafting a plan on the top sheet of rolled large pieces of paper.  A look of resolute determination fills his face.


What Do You Do With A Problem? written by Kobi Yamada with illustrations by Mae Besom is a marvelous look at how creativity can address obstacles large or small appearing in our lives.  The blend of narrative and images is accomplished.  This is a welcome addition which I believe should find a place on professional and personal bookshelves.  The child is never portrayed strictly as a boy or a girl granting the story universal appeal.  For ease of writing I assigned male pronouns in this post.

To learn more about Kobi Yamada and Mae Besom and their work please follow the links attached to their names.  At Publishers Weekly read One Small Publisher's 'Idea' Yields Big Results.
Posted by Xena's Mom at 11:42 PM