One of the most universal lines in those now famous lyrics is that kind of music just soothes the soul.  It's not just rock and roll that soothes the soul but many forms of music.  Whether it's a portion of a song or an entire symphony, those melodies have the capacity to transform individuals or entire groups of people. 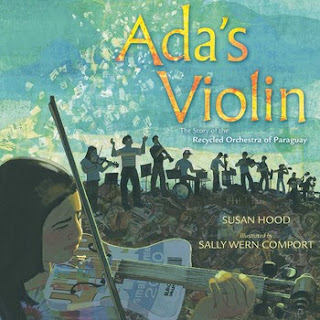 Every refrain begins with a single note.  Ada's Violin: The Story of the Recycled Orchestra of Paraguay (Simon & Schuster Books for Young Readers, May 3, 2016) written by Susan Hood with illustrations by Sally Wern Comport is how single notes or ideas or wishes if you will, come together.  It's a story of making beauty where it appears least possible.

Ada Rios grew up in a town made of trash.

Several miles south of the capital city Asuncion, Paraguay, lays the city of Cateura.  It is the site of an enormous landfill.  Garbage trucks deliver their loads all day long as recyclers work among the trash trying to gather what they can to make a living.  This is where Ada and her family made their home.

Music was a part of her family's life; her grandmother enjoying rock and roll music of the 60s and her father speaking of famous musicians and pointing out the sounds of specific instruments when they all listened to songs on the radio.  It was the sound of the violin Ada enjoyed the most.  As she and her younger sister, Noelia, grew up, started school, and became more independent, it was Ada who wondered what would become of them.  What kind of life would they have in this town made of trash?

The answer came in the form of a sign on the chapel wall posted by a new arrival to their community.   Ada's and her sister's grandmother signed them up for learning either violin, guitar or cello.  Favio Chavez did not have enough instruments for all the students who arrived to learn on the first day.  Half the students had nothing to play.

Favio Chavez was a man on a mission and he had an idea.  He enlisted the help of Nicolas "Cola" Gomez, a recycler and a carpenter.  With the help of another, Tito Romero, the two put their creative skills to work.  These inventive men made instruments from items gathered from others' garbage.  Guess who was given a violin?

Hours of practice in all kinds of weather outside with Senor Chavez and hours of practice on her own, honed Ada's skills as well as those of her companions.  The music these young people made transformed from discord to harmony.  Their sounds were changing the spirits of an entire community...and five years later a dream Ada never dared to dream came true.  And the songs reaching out from those recycled instruments to this day play on.


With each reading the richness of Susan Hood's use of language increases in this nonfiction narrative.  Research and interviews revealed personal and specific details which she includes in her concert of words; quotations, spoken Spanish and the insertion of sound effects adding to the authenticity.  Hood clearly represents the physical living conditions of life in Cateura but also describes the generosity of spirit found in the people highlighted in this title.  Her approach to the story with Ada's thoughts on what a garbage truck was

"a box of surprises"

comes full circle bringing a sense of splendor to the telling.  Here is a sample passage.

Every morning at dawn, Ada heard the first garbage trucks rumble and roll down the road to Cateura.  Beep, beep, beep!  Backing into the landfill, they tipped their loads up and up and---
CRASH!  The trash came tumbling down---fifteen hundred tons each day.


You have to pause when you open the matching dust jacket and book case.  The design in a word is stunning.  The blend of textures, images, light and shadows and individual items literally takes your breath away.  To the right on the front, placing Ada in the lower foreground with the orchestra in the background in the center on a pile of trash as scraps of sheet music rise upward is brilliant.  To the left, on the back, an interior image of Ada and her sister listening to their father speak about music, musicians and instruments as the radio plays is a glimpse of an intimate family moment. The opening and closing endpapers are a shade of the teal seen on the jacket and case.

the images extend across two pages.  Each one of them enhances and elevates the text and invites us to study all the intricate elements.  Sally Wern Comport involves us in these pictures by altering her perspective; we look down at a city street, we look up at workers on the top of the dump piles, we gaze into Ada's thoughtful eyes as she dreams and we look upon her face as she plays her violin, and we enter the workshop of Senor Gomez as he fashions the instruments.  The emotion on the faces of all the people is marvelous.

One of my favorite illustrations, of many, is of Ada and her sister playing in the sand.  They are squatting on a board bridging some water, both dipping pails downward.  Their grandmother's two pups are playing with the girls.  Their reflections in the water and the shadows created by the sun enliven the scene.  They are all surrounded by trash.  This is an eloquent moment where you would not expect it.


Ada's Violin: The Story of the Recycled Orchestra of Paraguay written by Susan Hood with illustrations by Sally Wern Comport is one of my favorite nonfiction books of 2016.  You anticipate hearing the music of the orchestra as you read it because of the flawless combination of text and visuals.  At the conclusion of the book an author's note provides more information.  Websites and videos are also included along with other sources, quotes and several pictures.


Be sure to visit Kid Lit Frenzy hosted by educator Alyson Beecher to see the selections of other bloggers participating in the 2016 Nonfiction Picture Book Challenge. 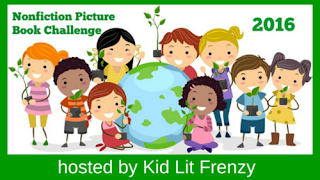