Throughout our lives no matter our age there are those we see as guides.  They may be family, friends or people we don't even know personally.  We try to imitate those traits we admire about them the most. 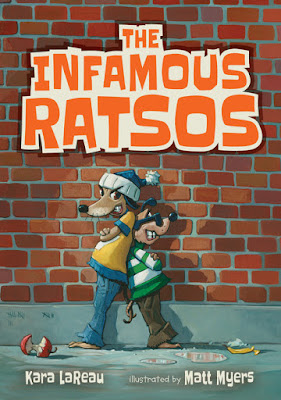 When we are younger it is most likely our parents whose footsteps we wish to follow.  For children living in a single-parent home, this parent may be their only anchor.  The Infamous Ratsos (Candlewick Press, August 2, 2016) an early chapter book written by Kara LaReau with illustrations by Matt Myers follows two brothers who make every attempt to emulate their dad's view of people in the world.


This is Louie Ratso.  This is Ralphie Ratso.

Neither Louie, a fifth grade student, nor Ralphie, a third grade student, want to be considered a "softie".  Everything they do needs to shout out loud they are tough to the core.  Louie who considers himself the brightest of the duo has a perfect plan to prove this truth.

During recess their body language and facial expressions supposedly convey their disdain for normal activities.  Working together they take a too-small hat from a huge bully, Chad Badgerton.  Their success, though, is short-lived.  It seems the hat was taken from one of their tiniest classmates on the bus earlier.  They are heralded as heroes!

With this failure weighing heavily on the twosome, a snow storm of epic proportions provides them with another opportunity.  Hours of shoveling have them gleefully hopeful but awakening from a much-needed rest, they are flabbergasted by their results.  Two more schemes, a food concoction and sudsy strategy, have Louie and Ralph nearly dancing at the probable outcome.

When they least expect it, Big Lou shocks them with a list of accusations.  If you would have asked any one of the three earlier about the outcome, they would have denied it.  Life is full of surprises.


Seven short energetic chapters written by Kara LaReau will captivate the intended audience.  The family dynamics, the comradeship between the two brothers (except when facing possible consequences) and the characters within the school and neighborhood communities are portrayed realistically.  It's the humor which flows freely in each episode that will have readers alternately cheering and laughing at the brothers.

LaReau uses words and sentence structure familiar to readers.  She writes like they think and talk.  Having Louie and Ralphie repeat a similar phrase at the end of most chapters adds a cadence to the narrative.  Here is a sample passage.

Then he says, "After tonight, everyone in the neighborhood will know how tough the Ratso brothers are."
They wait until they hear Big Lou's snoring, and then they sneak out of the apartment and down the stairs and outside.  They creep over to Mrs. Porcupini's house.  Ralphie reaches into his pockets and pulls out two big...

"Let's teach that prickly pickle not to give us sour looks," he whispers.


The ink and watercolor illustrations rendered by Matt Myers elevate the comedy found in the narrative.  His first image of a portion of the brick-walled apartment building crosses the gutter to the title page.  Opposite the verso Louie and Ralphie can be seen carrying several water balloons.  In the following picture Louie is releasing a balloon out an open window.  It is on the final page we are privy to the results of that act.  (You will laugh out loud.)

At nearly every page turn we are greeted with a full or partial page picture.  The details mirror marvelously the characters and their surroundings. Readers can see a book titled Rat Trap 1000 Pranks Endless Fun on the floor of the family's apartment, the pattern of sawed logs on Miss Beavers' dress, and the sign hanging in Mr. O'Hare's store window, Hop In We're OPEN.


The Infamous Ratsos written by Kara LaReau with illustrations by Matt Myers is fun from beginning to end generating a huge dose of giggles and grins.  As readers will discover along with the brothers being tough is hard work.  The final two chapters will have readers hip-hip-hooraying.