More Than Meets The Eye

Life experiences teach us people are rarely as first impressions would indicate but instead they are the sum of multiple influences, layer upon layer.  We may think we fully understand someone but often they surprise us.  Certain situations reveal their true character. 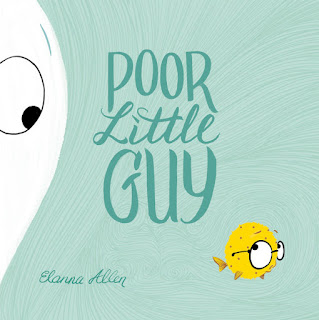 Like people Mother Earth has given advantages, many initially unseen, to her living beings which in turn assist them in survival.  The most beautiful can be deadly to predators.  The frailest can become fierce in the face of danger.  Poor Little Guy (Dial Books for Young Readers, an imprint of Penguin Random House, LLC, June 7, 2016) written and illustrated by Elanna Allen takes us deep into the sea.  When you are the smallest of the small, it's a frightening place.

The story starts without words as a tiny, unassuming, spectacle-wearing yellow fish approaches certain peril.  A watchful eye on a beast is larger than the tiny swimmer.  As the fish glides in front of and past the white giant fear fills every fiber of his body.

Passing unharmed he utters a sigh of relief.  What he doesn't know is the long arm of an octopus is reaching toward him.  Oh, no!  He's been captured!

The behemoth begins to sing sarcastic phrases taunting the little guy; who will surely be his next meal. As each is uttered the clever colossal creature forms a variety of corresponding shapes around its victim.  Bringing him close to his mouth, he opens wide and places the terrified teeny being inside.

YIKES!  What happens next is too startling to reveal. No one will be more astounded than readers.  Mother Nature does not disappoint.


The lack of text on the first two double-page images followed by a single word on the next three pictures creates absolute perfection in timing and suspense.  Elanna Allen then displays a keen sense of humor with her creative word play.  The tension builds supplying a most excellent atmosphere for the shocking shift in the narrative.  Here are two of her sentences used to intimidate the tiny, unassuming, spectacle-wearing yellow fish.

Catch of the Day!

Let's play the LOST IN A MAZE game!


Both the back and the front of the matching dust jacket and book case, two different images, prepare readers for the alarming situation the fish encounters.  To the left he anxiously peers upward, surrounded by swirling portions of octopus arms.  The opening and closing endpapers feature eleven sea creatures determined to consume the little guy as an entree or munchie.  There is a significant contrast in the two which cannot be disclosed as each begins and concludes the tale.

Using a limited color palette, pale green, white, black, yellow, brown, blue and purple, Elanna Allen visually enhances the text in a series of double-pictures and two single page illustrations rendered in pencil and ink with digital color (And lots of coffee).  The verso and title pages continue the narrative as started on the opening endpapers with the tiny fish looking worried as he glances backward.

She increases the sense of foreboding with varying points of view drawing us close to the action as when all we see is water, two large eyes in a white face with the fish swimming in front and then moving away to give us a more wide-angle perspective when the octopus is whirling in the center of the page tossing the fish from one arm to the other.  When she wants to intensify her text there is a drastic shift from one image to the next.  Her font size also mirrors exact moments.  The use of eyeglasses on the fish is a smart choice, elevating the expressions in his eyes.

One of my favorite illustrations is when the arm of the octopus extends toward the little guy.  Reaching from the left side, large and menacing, it moves across the gutter to the right arching above the tiny fish.  He is swimming toward the lower right-hand corner with his eyes closed.  A single word is placed above his head in a speech bubble.


Poor Little Guy written by Elanna Allen is one of those books readers are going to read repeatedly even when they know the ending.  The combination of text and images is so astutely crafted the irony will not diminish.  When read aloud, be prepared for gasps and giggles.

To learn more about Elanna Allen and her other work follow the link attached to her name to access her website.  Follow this link for seven pages of fun-filled activities.  Enjoy the book trailer.