If you were to visit grasslands, woodlands, a desert, the tundra, mountains, or other various aquatic habitats (rivers, oceans or seas, ponds, streams, swamps, marshes, coastal wetlands), you would certainly be aware of areas and inhabitants to avoid.  Similarly smaller critters living in the wild will most generally avoid those larger in size.  Those who are least aggressive will give a wide berth to disruptive residents.  It goes without saying any prey will become as invisible or unattainable as possible when a predator is near. 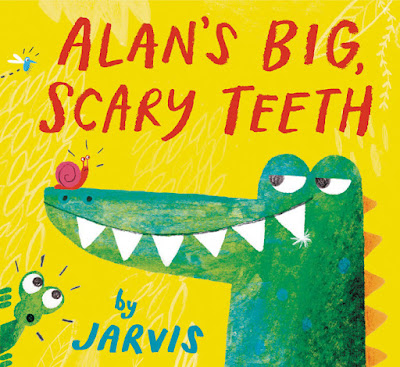 There are some animals that rarely, if ever, need to hide.  They move about sure in the knowledge of their fearsome presence.  Alan's Big Scary Teeth (Candlewick Press, February 23, 2016) written and illustrated by Jarvis is about such an animal.

Alan came from a long line of very scary alligators.

No one in the jungle was safe from this boisterous beast.  He enjoyed the reputation he had earned.  Each morning he followed a ritual before he left his home, enhancing his frightening figure.

Silently he entered the jungle, then he stomped, growled, chomped, grinned and shouted with glee.  Frogs, monkeys and parrots jumped, fell and squawked in fear.  The more terrified they were, the happier he was.

At day's end satisfied with the chaos he caused, he enjoyed what he believed was much deserved rest and relaxation.  As he did at the start of the day, Alan had an evening routine.  His final act was his best kept secret.

As Alan snoozed in his swamp one morning, Barry the beaver in a state of alarm discovered the alligator's hidden possession.  As you can imagine when he awoke, Alan was shocked to find it missing.  His attempt at business as usual did not go as planned.

A strange sound echoed through the jungle that night.  In the following days promises prevailed.  A tradition continued.


As an author Jarvis welcomes readers into Alan's jungle world sharing his morning habits and daily obsession with scaring the other animals.  The insertion of words conveying loud sounds and the reactions of the frogs, monkeys and parrots allows us to participate more readily in the narrative.  Bringing us into the story makes the secret more surprising and absolutely hilarious.

The technique of grouping events in threes supplies a cadence, a storytelling pace. A huge shift in the life stories of every animal in Alan's jungle is the result of the beaver's discovery.  This skillfully allows readers to see how the art of compromise works to benefit everyone, even Alan and his big, scary teeth.  Here is a sample passage.


On the matching dust jacket and book case Jarvis gets readers' attention with his choice of colors contrasting the bright green of Alan's scales and pearly white teeth with the yellow background, red title text and the turquoise letters and hummingbird.  At this point we know Alan is feared but we realize there might be more to the story.  To the left, on the back, the yellow continues over the spine into a portion of the page.  It ends with a jagged edge like teeth blending into a white background.  Here Alan is pictured casually leaning against a tree as the frightened jungle creatures observe him.  The opening and closing endpapers, done in shades of turquoise and white, feature the jungle flora.

A less formal title page highlights Alan happily grinning.  On the verso and title pages an alligator family tree on the left continues the theme as we zoom in on a startled snail sitting on a rock on the right beneath the title text.  Rendered in pencil, chalk, and paint and colored digitally most of the pictures extend across two pages.  Jarvis alters the sizes asking us to pause or continue at different rates of speed.  Twice he has a series of vertical illustrations grouped together to reinforce particular incidents.

His details amid the lush jungle settings elevate the comedy of specific moments.  Alan's toothpaste is Snap Snap Toothpaste.  He uses Eau De Gator cologne.  The eyes on his characters will encourage frequent bouts of laughter.

One of my favorite illustrations is of Alan lounging in the water of his swampy abode.  Most of his body is submerged except for his head, hands, feet and the tip of his tail.  He is reading The Jungle Times at the end of a long day of scaring.  Framing him are jungle trees, jungle leaves, the hummingbird and a snail floating on a leaf creating a peaceful scene.  It's a perfect picture preceding the shocking discovery on the next page.


Alan's Big Scary Teeth written and illustrated by Jarvis is a hilarious look at the art of deception.  It asks readers to think about our actions and the effect they have on others.  It introduces the benefits change can bring for everyone.  Be ready for merriment to fill the room when read aloud.  No matter how many times I've read it, I can't get to the end without laughing.

To discover more about Jarvis and his other work, please visit his website by following the link attached to his name.  He has posted my favorite picture there.  To view another interior image follow the link to this publisher's website.  Jarvis is interviewed at The Bright Emporium.  Enjoy the book trailer.