It begins with birdsong.  The sky is still dark with a few pinpricks of light left from remaining stars but our avian friends know.  They know dawn is coming so they open their beaks letting the notes drift through the air, announcing a new day.  As the sky lightens, the wild world awakens.  Alarms sound inside homes.  It's time to get up.  It's time to begin. 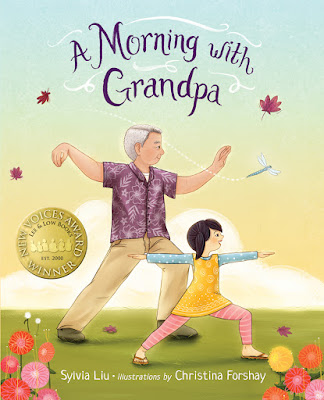 Most individuals maintain and even enjoy certain routines in the early hours of the day.  A Morning with Grandpa (Lee & Low Books Inc., May 2, 2016) written by Sylvia Liu with illustrations by Christina Forshay gives readers a peek at shared experiences across the generations. Wisdom and patience celebrate with curiosity and exuberance.

Mei Mei watched Grandpa dance slowly among the flowers in the garden.  He moved like a giant bird stalking through a marsh.

Mei Mei's grandfather is practicing tai chi.  The form he is making is called White Crane Spreading Its Wings.  He goes on to explain to Mei Mei that tai chi is a style of martial arts.

When Gong Gong (grandfather) slowly moves through another form inviting Mei Mei to try, she looks more like a hopping frog than a graceful weed grazing the sand in a sea. In reply to her query asking him how she moves, he does not criticize but offers helpful hints.  Her breathing techniques resemble gusts more than gentle puffs.

Recommending she should slow down using her body to circulate the air, Mei Mei mimics the motion of a propeller.  She is vocal and active to his silent and smooth.  After several forms Mei Mei is so happy with her progress and her grandfather's words, she offers to teach him something too.  They have been learning how to do yoga in her school.

Together they try Downward Dog.  As they shift and shape their bodies, it's clear one is better suited to this kind of exercise.  Gong Gong is unsure and a bit rusty to her certain and nimble.  Mei Mei is positive grandfather can master yoga.  She asks him to try one final pose.  Upright and strong they are two sentinels.


Good writing wraps around you.  Good writing tickles your senses asking you to join the story.  The words of Sylvia Liu guide us into all the memorable minutes experienced by Mei Mei and Gong Gong on this special morning.

The conversation between the two gives us insight into the importance of their relationship.  It is clear they share a deep respect and love.  The descriptions of their movements when practicing either tai chi or yoga further reveal their personalities.   Here is a sample passage.

"Let's try something else," said Gong Gong.  "This is called Cloud Hands."
Gong Gong stepped from side to side and carefully
moved his arms back and forth.  He was a warm summer
breeze gently blowing through the trees.
Mei Mei was a frisky fall wind tumbling among the leaves.


The new, clear-sky-day colors of pale golden yellow, minty green and soft blue extend from the right to the left on the matching dust jacket and book case.  On the back, to the left, a single dotted line weaves from the ISBN to a dragonfly in flight.  The same dragonfly glides by as Gong Gong practices a tai chi form (single whip) and Mei Mei practices a yoga pose (warrior 2).  The colors on the drifting leaves and flowers are suggestive of warmth and peace.  A plain light orange covers the opening and closing endpapers. Flowers from the garden are placed on the title and verso pages as are the floating leaves.  The dragonfly gently dips down across the dedication page.

These illustrations rendered digitally by Christina Forshay use a full range of color.  Alternating between two-page pictures, single page illustrations, a group of small images on one or two pages or a single oval picture framed in white, she conveys the shared joy of the grandfather and his granddaughter.  Their body movements mirror their personalities and their particular exercises.  Each portion of their facial expressions depicts the happiness they feel.

One of my favorite illustrations is when Mei Mei is releasing her breath in a big whoosh.  At the top of the image is the garden fence with flowers along the front in a colorful array, sunflowers bending under the weight of full blossoms.  Mei Mei's cheeks are puffed out blowing toward Gong Gong trying to get him to bend over toward the ground.  In compliance with her request rather than her abilities, he has lifted up one leg and both his arms to signify her strength.  This is one of several pictures demonstrating the patience of this adult toward a beloved child.


You might want to have books on tai chi and yoga handy after reading A Morning with Grandpa written by Sylvia Liu with illustrations by Christina Forshay.  The attempts by both to enjoy the preferred meditative exercise of the other are heartwarming; welcoming readers to reflect on them and the building of relationships from one generation to the next.  At the close of the book Sylvia Liu has descriptions of each pose and Christina Forshay includes thumbnails sketches.  On the closing page Sylvia Liu lists eight sources about tai chi and yoga.

To discover more about Sylvia Liu and Christina Forshay and their work please follow the links attached to their names to access their websites.  To view interior images please follow this link to the publisher's website.  The book trailer premiere along with an author and illustrator interview can be found at Scholastic's Ambassador for School Libraries, John Schumacher's blog, Watch. Connect. Read.  Interviews with Sylvia Liu about this debut picture book can be found at Tara Lazar's Writing for Kids (While Raising Them), KidLitTakeaways, KidLit411 and Miss Marple's Musings.  Both Sylvia Liu and Christina Forshay are interviewed at Carter Higgins' Design of the Picture Book.  They interview each other at All The Wonders hosted by Matthew Winner.  You can tour Christina Forshay's studio at Andrea Skyberg's blog.
Posted by Xena's Mom at 2:18 PM