Chaos In The Classroom

As an educator there will be pets and critters of all kinds in your classroom; it's inevitable.  They will be there as welcome or surprise guests or as permanent members for the school year.  If you are a teacher librarian in your building the number of animal visitors increases.

Classrooms want to share their pet bringing it to the library for a lesson, individual students bring in their much-loved pals and then there are those students who've captured something from the out-of-doors they can hardly wait to show you.  These gals and guys come to you before school or between classes carefully carrying a jar with a lid punched full of holes or a larger box in a similar state.  You learn over the years to quickly and cheerfully ask what is in the container.  You may be asked to identify the animal, discover its favorite habitat or meal and always to share in the joy of "look what I found." 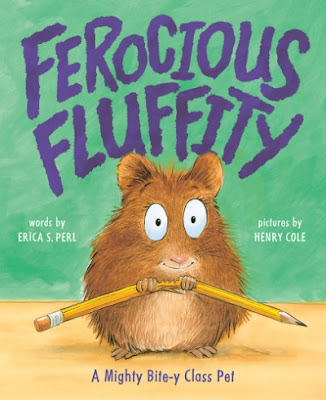 Most pets residing in classrooms as valued members have been selected for particular qualities.  Obviously the safety of all the students is important.  Ferocious Fluffity: A Mighty Bite-y Class Pet (Abrams Books for Young Readers, July 19, 2016) written by Erica S. Perl with illustrations by Henry Cole proves normal behavior can go awry.

The box was big and tall and wide.
Could there be a pet inside?

There was a pet inside; an adorable looking bundle of fur.  They were advised to

by Mr. Drake their teacher.  They named her Fluffity.  Everyone wanted to take her out of her cage and hold her.  Everyone.

One morning Mr. Drake was late.  The students saw this as a golden opportunity.  Fluffity was removed from her home.  YIKES!  She bit the gals.  She bit the guys.  She bit everyone.

The children ran like crazy from the room voicing their distress.  Like Mary's nursery-rhyme lamb that hamster followed them everywhere.  Mr. Drake finally arrived at his classroom, upset to see the mess.  Searching for his students and the wayward Fluffity Mr. Drake walked straight into trouble.

Tricks were tried but nothing worked until a clever student substituted the behavior of one furry friend for another.  Rest assured things are more normal in Room 2-D now.  All will be well...or will it?


We are enticed to read and race along with the action through the rhyming, rhythmic story penned by Erica S. Perl.  She captures our attention with the "what-if" suggestion of a classroom pet gone wild and keeps it with one comedic moment after another.  As the tension builds we don't expect the "why-didn't-I-think-of-that resolution or the concluding twist.  Here is a sample passage.

Children screamed and children ran:
Zander, Zara, Sydney, Stan,
Kevin K., and Kevin B.
At their heels was Fluffity.


Rendered in watercolor the illustrations created by Henry Cole for this title are brimming with wide-eyed innocence and curiosity in contrast with disbelief and understandable panic.  This heightens the pure fun.  Readers can see this first on the dust jacket.  Fluffity looks cute as can be on the front but as our eyes move left to the back we see a continuance of the tabletop.  In the center of the page Mr. Drake and his students are peering anxiously from behind an overturned table they are using as a barrier.

On the book case an interior image, enlarged, shows six students running down the hallway in fear with Fluffity hot on their heels.  That a tiny hamster could be the cause of this kind of mayhem is hilarious.  As a compliment to the yellow on the book case background, the opening and closing endpapers are purple.  Even before the story starts Cole has six small images of Fluffity on the title, verso, and dedication pages.  She looks the very picture of harmless except for her love of chewing indicated on the handle of a pair of scissors and a ruler.

A palette full of cheerful color is used throughout on nine two-page images, several pages of smaller illustrations on white and three single page visuals including one final uproarious picture.  Point of view is shifted to draw our attention to particular scenes.  Cole's special brand of humor is evident in the characters' facial expressions as well as the details in his visuals.  Two of the bulletin board headings proclaim:

YOU'RE OFF TO A GOOD START WITH A GOOD BOOK

BOOKS YOU CAN REALLY SINK YOUR TEETH INTO!

One of my favorite illustrations of many is of the children in the gym.  They are all gripping the rocks on the climbing wall, looking in fear at the small hamster waiting below them.  Fluffity appears tiny in comparison but by now readers know the truth.


As a lively read aloud sure to ignite shared laughter Ferocious Fluffity: A Mighty Bite-y Class Pet written by Erica S. Perl with illustrations by Henry Cole is a fantastic selection.  The text and images work together to give readers a story to be enjoyed repeatedly.  I can hear the shared giggles and grins already.

To learn more about Erica S. Perl and Henry Cole and their other work, please follow the links attached to their names to access their websites.  Erica S. Perl has another site which can be viewed here.  Both Erica S. Perl and Henry Cole were interviewed at Reading Rockets with links respectively here and here.  On Scholastic's Ambassador for School Libraries John Schumacher's blog Watch. Connect. Read. the book trailer for this title is revealed as well as an interview with Erica S. Perl.  At educator Colby Sharp's blog, sharpread, Erica S. Perl is interviewed about this title, reading and writing.   Her responses are sure to make you smile.  Two years ago Henry Cole was a guest at The Picturebooking Podcast.
Posted by Xena's Mom at 11:49 PM