Escape To Seek, Seek To Escape

History holds secrets.  Within time some of these secrets are revealed, uncovered by searchers of secrets.  Historians, archaeologists, genealogists, and journalists, to name a few, devote their professional, and sometimes their personal, lives to uncovering the truth. 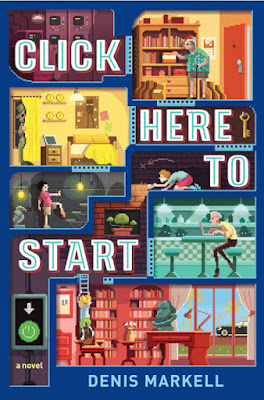 For generations some families have hidden events, information and items, big and small.  Depending on circumstances they may never be revealed.  In Click Here To Start (a novel) (Delacorte Press, July 19, 2016), a debut novel by Denis Markell, a death sets in motion plans by multiple parties.

It looks like something from a science-fiction movie, with so many machines and tubes going into and out of bags hung on poles.
For a moment, it doesn't register that all those tubes and hoses are connected to a person.

The person is Ted's Great-Uncle who has requested his nephew visit him alone.  During the course of their conversation, Ted's expertise and passion for escape-the-room games is disclosed.  His great-uncle's parting words don't seem to make any sense nor does his plea for Ted to promise to follow those words.

After his Great-Uncle Ted's passing, Ted and his parents receive some startling news; his great-uncle's will has been changed.  Ted has been left the entire contents of his great-uncle's apartment including an unnamed treasure.  When Ted and his best friend Caleb arrive at his great-uncle's home another surprise awaits them.  Ted's dad, an English professor, has a new boss, the head of the department.  Graham Archer, wanting his daughter to make new friends, requests that Isabel spends the day with Ted and Caleb.

Other than the discovery of the apartment looking as if his great-uncle never threw a single thing away, the first day the trio spends together is unremarkable.  It's a completely different story when Ted logs on to his computer in the evening.  A new game, The Ted Game, appears on the screen.  It's eerily realistic.

In the following days tension elevates as Ted, Caleb and Isabel work to crack the code realizing Ted's great-uncle has devised an elaborate game, an intricate puzzle revolving around a decades-old mystery.  Nothing is as it first appears.  Friends might be enemies and enemies might be friends.  Non-stop action brings all the characters together in a jolting revelation.  Endings are beginnings.


The writing of Denis Markell is concise and precise; every word linking to the next to create a completely captivating story.  His cast of characters is diverse in their ethnic backgrounds, economic status and family structure.  The talents of the twelve-year-old trio of friends, Ted, a brilliant solver of virtual and real-time puzzles, Caleb, skilled artist and superhero creator, and Isabel, an avid reader and literature nerd, serve them well when they can overlook their differences of opinion.

Through Ted's narrative voice and dialogues between the other individuals, readers feel as though they are participants in each situation.  The conversations are realistic enough you fully expect the characters to walk off the pages.  Highly descriptive scenes intensify particular moments.  Another technique employed by Markell which keeps you turning pages is the slightly cliff-hanger endings to each of his chapters.  Here are some sample passages.

"It looks like your great-uncle was into World War Two," Isabel observes as she wipes some dust off a couple of the volumes
"Yeah, he served in the war, apparently.  My dad said something when we were heading to the reading of the will, how he was a war hero.  It's kind of weird though..." I let my voice trail off.
Caleb looks up.  "What's weird?"
"My mom said he never wanted to talk about the war.  He always seemed to act like he wanted to forget it.  So---"
"Why does he have so many books about something he wanted to forget?" Isabel finishes my thought.  "That is kind of funny.  But they don't look like they've been opened in years."
"So why didn't he just throw them out?" I wonder.
"Take a look around," Caleb laughs.  "Does it look like he ever threw anything out?"
He's right.  If the apartment resembles anything, it looks like a setting for some crazy escape-the-room game, what with all the random junk piled up all over the place.

It's total chaos.  The place is a shambles.
Every bag has been ripped open; the furniture is cut to shreds, the newspapers strewn all over the place.  The drawers in the desk have been pulled out and broken.
Someone has been searching for something.  Something they want very badly.
My mom is shaking, she's so mad.  "Is this what you call clean?" she fumes.  "I took time off from work, brought those men here, and this is what---"
"Mom!" I yelled.  "Are you serious?  Do you think this is how we left the place?"
"Mrs. Gerson," Isabel says calmly.  "There's been a break-in.  We need to call the police."
My mom sits down.  She looks around the room.  "I'm sorry...I just...Of course..."
She takes out her phone and dials 911.  As she waits, almost to herself, she murmurs.  "Who would do such a thing?"
"Enemies," Caleb declares grimly.


Click Here To Start (a novel) written by Denis Markell is a marvelous blend of mystery, history, gaming, family and friendship.  His ability to bring these elements together especially his descriptions of the steps to solve a game or a puzzle as well as the service of the men of the 100th Infantry Battalion and the 442nd Regimental Combat team during World War Two is outstanding.  Once started readers will find it difficult to stop until the final sentence is read.  I highly recommend this title.

At Watch. Connect. Read., the blog of Scholastic's Ambassador for School Libraries, John Schumacher hosts the cover reveal and a fantastic interview with Denis Markell.  Denis Markell is also a guest at The Hiding Spot a blog maintained by Sara Grochowski, a book seller.  In this post he discusses his reading life.
Posted by Xena's Mom at 3:31 AM