It's A Sure Thing

It's referenced in children's nursery rhymes and songs.

It's verified and explained in scientific studies on canine evolution.  Dogs love bones. 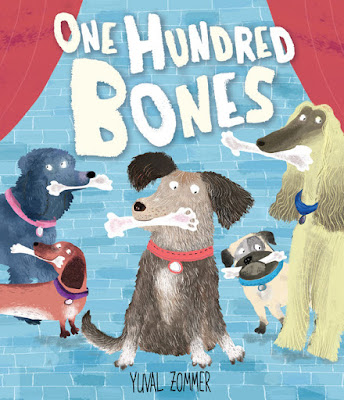 If there is a bone to be found, our pooch pals will find it.  One Hundred Bones (Templar Books, an imprint of Candlewick Press, April 26, 2016) written and illustrated by Yuval Zommer begins with a single dog on a daily mission.  He digs digging.

Scruff was a stray; a dog without a home.  No human cared for him.  When the other neighborhood dogs walked by wearing collars and leashes, Scruff, free as could be, dug holes.  This did not make the humans happy.

"Get off my lawn!" Mr. Fusspot warned.

No one, least of all Scruff, liked to be treated poorly, so he left.  Roaming around the countryside this super sniffer smelled something downright delicious.  He dug a hole, going down deeper and deeper. What he found boggled his mutt mind.

This was no ordinary discovery.  Scruff knew this was not a one-dog job.  Heading back to the city, he asked

Percy the pug, Pixie the poodle, Sidney the sausage dog and Ada the Afghan

for assistance.  There was simply no way they would entertain the thought of getting dirty until Scruff mentioned one word. Bones.

Not only did they unearth bones and more bones and still more bones; these did not resemble any they had previously seen.  Being clever canines, they knew where to go and how to get there.  Scruff's affection for dirt and digging lead to more than an assembled, fierce fossil. This time his rewards were forever.


The technique used by Yuval Zommer to tell this story involves a rhythmic repetition.  When the narrator makes a statement, it is followed by several supportive examples.  For instance he does this in describing why Scruff is not like other dogs, the distress the humans have for his digging, Scruff searching for a more peaceful place, and the kind of bones Scruff finds.  This tale will have readers leaning in to listen.  Here is a sample passage.

And away Scruff ran
back over the hills,
through the woods,
across the fields,
and into town.


When you look at the front of the matching dust jacket and book case with those dogs holding bones in their mouths, it looks normal except for one thing.  Where are they?  Are those curtains?  Already Yuval Zommer is creating interest with questions.  The expressions on his dogs' faces are alert and curious.  On the back, to the left of the opened jacket and case, Scruff is placed in two colorful loose ovals on a grass green canvas with scattered bones.  These two images foreshadow events.

The opening and closing endpapers and first page turn are a pale brown shade, as if dirt has been rubbed on the paper.  A frame is created with a variety of the found bones.  Rendered digitally using a full color palette the illustrations are as lively as the characters.

White is used by Zommer to supply a loose border around his pictures of varying sizes which place emphasis on his text.  The details in each setting feature delicate leaves, flowers, mushrooms, ferns, vegetables, roots and birds.  These birds seems to be observers of the doggy happenings.  Careful readers will note additional elements which designate the specific geographical setting of the city.  It's a definite nod to dogs that the only part of humans seen in this story is their legs or in the case of the professor from the shoulder down.

One of my favorite illustrations, on a single page, is of Scruff deep, deep underground.  You are given a cross-section of his digging efforts; a zig-zag tunnel before his discovery of the mound of bones.  Roots are weaving through the dirt.  Scruff is holding a rather large bone in his mouth.  His expression definitely says he needs more help.


Let's suppose for a moment dogs have a complete command of the English language.  Let's also suppose we humans are perfectly aware of this.  Can you imagine the chaos the words one hundred bones would cause if stated to one or more dogs?  Thinking about this and reading One Hundred Bones written and illustrated by Yuval Zommer is sure to make most readers grin from ear to ear, regardless if they are dog lovers or not.  Be sure to share this title repeatedly for the sheer entertainment value or with a theme focusing on teamwork, friendship, dinosaurs, dogs or bones.

To learn more about Yuval Zommer and his other work, please follow the link attached to his name.  Yuval Zommer chats at Library Mice about the inspiration for this book.  You can view interior images at two publishers' websites here and here.
Posted by Xena's Mom at 10:37 PM