With each season of the year, even in those months when the outside world is sleeping, nature sends us color.  It may only be a flash of rich red from a swooping cardinal or vivid blue from a chattering jay, but its vibrancy is a message.  It's a reminder of associating color with the excitement of being fully alive. 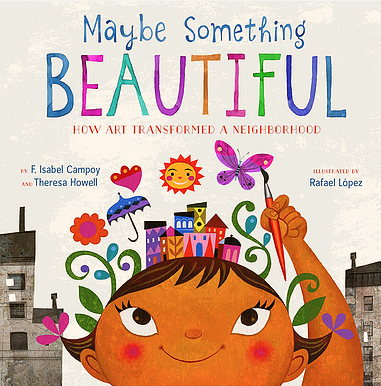 Not only does Mother Nature send us little pieces of color when there is nearly none but the burst of hues from one season to the next or from a dry spell ended with a rain storm seems to happen in hours rather than days.  Sometimes people take their lessons from the natural world.  They make loveliness bloom where there was none.  Maybe Something Beautiful: How Art Transformed A Neighborhood (Houghton Mifflin Harcourt, April 12, 2016) written by F. Isabel Campoy and Theresa Howell with illustrations by Rafael Lopez is inspired by a true story of people who did that very thing.

In the heart of a gray city, there lived a girl who loved to doodle, draw, color, and paint.

No piece of paper was ever blank for very long in her presence.  Her joy came from making shapes and adding bright colors to each of them.  The very special thing about Mira was she did not guard this happiness but shared it with others; giving them her small pieces of artwork.

One day Mira taped a golden, smiling sun to a wall in her community.  The very next day a man was looking intently at that sun as if peering through the lens of a camera using his hands as a frame.  His pocket was stuffed with paint brushes.  He gave a curious reply to Mira's question.

Then faster than a lightning strike he took a can of paint and one of those brushes and began to cover the gray.  After he answered Mira's second question, she found herself being handed a paintbrush.  More gray vanished under a burst of booming brilliance.  He drew and she painted.

Their work did not go unnoticed.  Something new and exciting was taking place in this neighborhood.  People were arriving to participate.  People were dancing.  People stopped.

The policeman arrived.  An extraordinary thing happened next.  It grew and grew and grew until Mira made one final choice.  Perhaps an idea could take flight.


Working together F. Isabel Campoy and Theresa Howell have created eloquent scenes with their words.  In picture books word choice is important; they have excelled at their selections.  Instead of saying

In the center of a gray city

they used the word heart.  This immediately brings the reader into the soul of the city and the story.

They also invite readers further into their narrative by naming specific individuals as recipients of Mira's pictures; also stating exactly what Mira has drawn and colored on those pages.

On her way to school one day,
Mira gave a round apple to Mr. Henry,
the owner of the shop down the street.

For emphasis they have added sound effects and the names of specific dances as the joy spreads.  This story reads like poetry with a mix of descriptive text and conversation.  Here is another partial passage.

... The shadows scurried away.
Sky blue cut through the gloom.
The man's laughter was like a rainbow
spreading across the sky.


The matching dust jacket and book case extends beyond the boundaries of the folded flap and book case edges.  Left to right on the dust jacket, on either side of Mira's colorful joy, the city extends in its grayness, edge to edge.  The white background is indicative of the blank pages Mira transforms with her art.  The buildings on the book case are carefully continued to the opening and closing endpapers.  On the first the entire city is dull except for one glowing window with a single colored tree outside that window.  On the second set of endpapers the efforts of the community are evident as is the final act of Mira, a messenger in flight on sky blue rather than a washed-out gray canvas.

The joy spoken of by the authors on the first page is portrayed by illustrator Rafael Lopez in a two-page image for the title.  A smiling Mira walks along a city street represented by a living leafy branch.  She is painting a butterfly as she walks toward a transformed cityscape with a smiling sun at the end.

Rendered in a combination of acrylic on wood, original photography, and digital art all of the illustrations span across two pages.  For full impact and asking readers to pause, two appear vertically.  In another two pictures the point of view shifts close to Mira and other characters speaking with her.  Exquisite facial details and spirited body movements capture the happiness filling the community.  Each picture is like a mural of magical moments growing.

One of my favorite illustrations is the first vertical image.  Across the sides and a portion of the top Rafael Lopez has placed black and white stylized swirls (clouds or smoke?); the sun peeking out from one on the right side.  Leaping into the air is the man laughing; paint can in one hand and brush in the other, coloring the sky; his striped shirt, black tennis shoes and pink socks a revelation of his talents.  His feet hover over the gray buildings.  On one wall is Mira's tiny picture of the smiling sun.


Based upon the real work of Rafael Lopez and his wife Candice in the community of East Village outside of San Diego, California, Maybe Something Beautiful: How Art Transformed A Neighborhood written by F. Isabel Campoy and Theresa Howell with illustrations by Rafael Lopez will fill you with utter and complete elation.  With every page turn the words and visuals will lift your spirits inspiring you to make beauty wherever you go.  A four page note from the authors with illustrations is included at the end of the book.  This is a highly recommended title.

To discover more about F. Isabel Campoy, Theresa Howell and Rafael Lopez please follow the links attached to their names to access their respective websites.  Rafael Lopez maintains a blog.  Here is a link to an entire site dedicated to this title.  It is filled with resources.  F. Isabel Campoy is interviewed at the Children's Book Academy and at Multicultural Children's Book Day.  Rafael Lopez is interviewed at La Bloga.  Author, reviewer and blogger Julie Danielson features art from this book at Seven Impossible Things Before Breakfast.  Enjoy the book trailer.


UPDATE:  This title is celebrated at All The Wonders with several activities, a podcast and an additional video.  September 12, 2016
Posted by Xena's Mom at 8:34 AM