With every race there is a chase.  Even if the contestants begin on equal footing there will be a constant shift in pace as strategies dictate.  First one party takes the lead, then another moves ahead. Predictions will be made naming one as the possible winner.  Sometimes it's so close only the final seconds will reveal the victor. 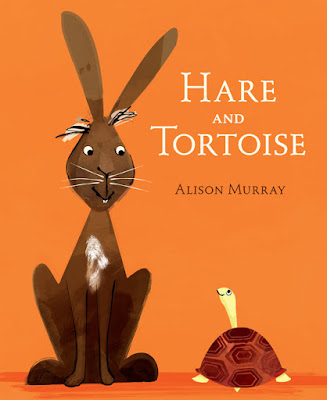 One of the oldest known races in literary history is found in a collection of stories, Aesop's Fables.  In The Hare & the Tortoise the animals leave us with more than one point to ponder.  In a new retelling, Hare And Tortoise (Candlewick Press, May 24, 2016) written and illustrated by Alison Murray, readers are presented with a lively and entertaining perspective.

As the frisky fellow pauses the attributes of his physique are duly noted; his ears, eyes, head, paws, nose, whiskers and hind legs in descriptive detail.  Three exemplary qualities of his are listed as well as his obsession with carrots.  And admittedly he is not shy about proclaiming his abilities when speed is a factor.

We are next introduced to Tortoise when she is eventually found.  (She can be mistaken for a rock when at rest.)  She does not have a long list of characteristics.  She cannot do any of the three fast facts but her life outlook tops the positive and optimistic scale.

The racers are ready.  The course is set, winding through the farm and ending at the gate near the barn.  With a rooster crow the contest begins.  Hare takes the lead leaping toward certain triumph.  If you've ever seen a tortoise move, you might be ready to concede at this point on Tortoise's behalf.  Tortoise is not exactly whizzing down the trail.

Then two very specific details, an irresistible temptation and The Shady Tree on a knoll, generate a shift in the narrative.  A short time later the spectators at the gate are cheering wildly.  A gracious champion offers a new delicious challenge.


Alison Murray adds new threads to the timeless fabric of this tale repeatedly with great effect.  In acquainting us with Hare and Tortoise prior to the race focusing on the characteristics of one and drawing our attention to the absence of those same traits in the other, our anticipation is heightened.  This approach also provides Murray with the opportunity to supply liberal doses of humor.  Allowing Hare and Tortoise to comment within the body of the story enriches this version.

As we read the tale, the voice of the unseen narrator is exactly like listening to a commentator at a sporting event.  The use of repetition, rhyme and alliteration contributes to the rhythm and rate at which the story unfolds.  Verb choices reflect specific moments during the race.

Hare races through the tickliest grass.

Tortoise trundles through the tickliest grass...

"I may be slow, but watch me go," hums Tortoise.


A first glance at the front of the matching dust jacket and book case tells us Hare and Tortoise at the very least have a healthy respect for one another.  They might even be best buddies.  The color choices radiate warmth.  To the left, on the back, a portion of an interior image shows Hare charging ahead over a hill shouting,

with Tortoise at the bottom exclaiming,

The opening and closing endpapers in crisp white with shades of turquoise depicts The Race Course.  Within the rectangle for the Scale 1:100 Alison Murray exhibits the disparity between the two visually and textually.  On the informal title page along with the text Murray places a bunch of carrots and a tree leaf.  The verso and titles pages are a single illustration of Hare and Tortoise frozen in a moment of friendship, looking at each other.

Rendered digitally, these illustrations varying in size, double page, single page, extending across the gutter creating a column for text, or horizontally paired across two pages, literally sizzle with energy or strum slow and steady depending on the character being depicted.  Page turn by page turn Murray is giving us an up-close-and-personal view of the action on the course.  The first eight pages dedicated to readers meeting Hare and Tortoise are sure to induce laughter; Hare leaping over the field filled with tall grasses and flowers, an almost scientific portrait of his physical traits with descriptions in boxes and arrows pointing to portions of his body,  the search for Tortoise among rocks and the "scientific" names assigned to each of them are another example of Murray's comedic details.  The facial expressions on all the characters but especially on Hare and Tortoise are bursting with joy.  Murray cleverly indicates the passage of time by inserting the sun's position in some of her pictures.

One of my favorite of many illustrations is that following a description of Hare as he rests.  He suddenly is aware the real world and his dream world might be one and the same.  On the left of this two-page picture we move close to Hare startled and standing next to The Shady Tree, a look of disbelief on his face.  It matches the text perfectly.  To the right other farm animals are gathered outside the gate watching and cheering as Tortoise moves down the path.  In the distance the barn is decorated with pennants, bluebirds flying past.


You simply can't help but love this interpretation of an enduring fable.  Hare And Tortoise written and illustrated by Alison Murray captures the soul of the original but gives readers charming extension, more breadth.  I highly recommend adding this title to your personal and professional bookshelves.  You will want to pair it with Jerry Pinkney's gorgeous The Tortoise & The Hare.

To learn more about Alison Murray, who lives in Scotland, and her other books, such as Apple Pie ABC and One Two That's My Shoe!, please visit her website by following the link attached to her name.  At the publisher's website you can view one of the interior double-page images.