Start Your Engines...The Race Is On

If your windows are down as you approach, even miles away, you can hear the roar beginning.  It's the sound of more than twelve thousand fans gathering for the day.  The stands and infield are packed with people.  Trucks are parked inside the circular track.  Family and friends are seated in chairs on the roof of those trucks to get a better view.  When the flag drops, those voices are joined by the rumbling of engines as the race at Michigan International Speedway begins. 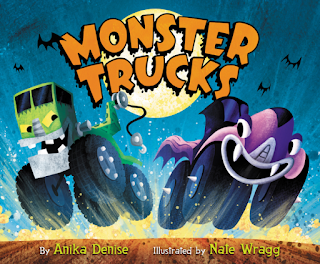 Shouted conversations speculate on the outcome.  Will the favorite finish first or will a "dark horse" speed and weave around the front runners?  A dastardly, delightful spin on who might win is found in the rip-roaring Monster Trucks (Harper, an imprint of HarperCollinsPublishers, July 12, 2016) written by Anika Denise with illustrations by Nate Wragg.

We meet those lined in a row and ready to go; one with parts started by a spark, another which lifts his hood to howl, a third more dead than alive but ready to drive, another who is a shadow of his former self, and the fifth and final entrant who seeks to drain the energy of everyone.  The flag goes up and then down, the sound is deafening as the competition commences.  The battle is fierce as they circle.  What's this?  Another competitor has arrived!

It's a bus, a little blue bus, bustling to join that bunch of boisterous bullies.  The others tower over the timid truck.  They're ready to feast on her apparent fear when, with a shout, a challenge is issued.  Shifting into high she leaves those snide rides real fast as they fade into the rear.

Maneuvering with skill the smallest takes the lead as the furious five spin and collide.  Now in the open, the little blue bus is a target, a bull's eye for what has burst forth from the mess of metal.  The finish line looms.  Will the mighty of heart meet their doom?  A trick and a twist are revealed under the light of the full moon.


The beat generated by the rhythm of the rhyming, alliterative, and onomatopoeic words written by Anika Denise is sure to have readers and listeners ready to race (or dance at the very least).  The narrative pauses in several places as a familiar refrain, three phrases describing the monster trucks, chants the current mood.  Word choices and punctuation create a cadence that flows and is never forced.  Readers feel as though they are observers of midnight madness, a race run in the absence of daylight and humans.  Here is a sample passage.

It's a monster mash-up!
CLANG!  BOOM!  BASH!  BANG!
Every truck for himself---by piston and FANG!
When out of the pit...with a PUTT and a TOOT
comes a LITTLE BLUE BUS
looking perky ...and cute.


Opening the dust jacket (I'm working from an F & G.) readers are greeted with a full image left to right, back to front, of the five fearsome monster trucks revving their engines as they race down the track.  Nothing is going to stop them as they fight for position.  Nate Wragg uses a full color palette but lights from the headlamps, speedway stands and the full moon cast shadows and an eerie glow to the scene.

On the title page the ghost truck glides in through headstones, looking at the reader with wide eyes.  Three other trucks travel over darkened ground and through trees looking like skeletons on the verso and dedication pages.   A lone gas pump, shaped like a coffin, drips gasoline as vampire truck slurps a sip.  Bats fly across the sky.

Most of the illustrations rendered in acrylic paints with digital color are spread over two pages or a single page, edge to edge.  For one portion of the narrative Wragg uses three smaller horizontal pictures on a single page to heighten tension at a turning point in the story.  The animation on the truck faces is superb, more scary than cute.  Every visual is charged with energy.

One of my favorite illustrations is when the monster trucks are blasting from the starting line.  Their expressions are full of determination as they face forward or give each other the evil eye.  They are going so fast they are nearly airborne.  The sky behind them is shades of orange, full of golden yellow rays shooting upward from the ground behind them.  You actually believe you can hear the engines and the screams from the crowd.


Bright and bold Monster Trucks written by Anika Denise with illustrations by Nate Wragg is a finger-snapping, toe-tapping read aloud; a seasonal selection or for a monster or truck themed story hour or event.  You need to plan on reading it more than once because your listeners will want to participate with gusto in the word play. It's noisy, scary, fun and a little bit tricky.

UPDATE:  Anika Denise is a guest at PictureBookBuilders.  Enjoy the interview. August 9, 2016
Posted by Xena's Mom at 4:38 PM