Catastrophic events shared by survivors and witnesses make indelible marks on our minds. These horrific happenings change all our lives, the way we knew life, forever.  Nothing will not, cannot, be the same.

People tend to remember where they were and who they were with vividly.  On November 22, 1963 in the early afternoon I was with my seventh grade classmates on the second floor of our junior high school, an old brick building.  We were seated in Mr. York's math class when we were interrupted with a stunning announcement over the P. A. system.   President John Fitzgerald Kennedy had been assassinated.

On September 11, 2001 I was seated in my office with my assistant.  It was the first full year we were in our newly constructed library media center at the elementary school.  A bank of windows stretching across one side looked out over the playground and behind that into the woods.  I noticed deer frequently walking by on the weekends and evenings when I worked.  In the morning between classes our phone rang.  It was my assistant's daughter telling us to turn on our television set immediately.  We both ran out of the office across the room.  We stood watching in horrified silence and then in tears.  Over the course of the next few hours and the following days the sadness for the lives lost, nearly three thousand, during those attacks deepened.  We were all overwhelmed with grief. 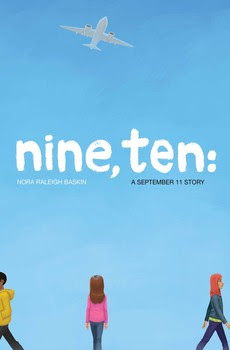 For our children, our students, not yet born during 9/11 there are stories to be told they need to hear.  Nine, Ten: A September 11 Story (Atheneum Books For Young Readers, an imprint of Simon & Schuster Children's Publishing Division, June 28, 2016) written by Nora Raleigh Baskin is one of those stories.  It's a tapestry formed by the threads of four young people's lives.

Everyone will mention the same thing, and if they don't, when you ask them, they will remember.  It was a perfect day.

The first two pages describe a scenario of the remarkable beauty of the morning of September 11, 2001 before 8:46 am.  The next chapter begins on September 9, 2001 in an airport, O'Hare International Airport, located in Chicago.  We are introduced to Sergio, an African-American boy leaving Chicago after receiving an award, who lives with his grandmother in Brooklyn, Naheed, a twelve-year-old Muslim girl waiting for visiting family to arrive, Aimee, a Jewish girl moving to California with her parents to begin her seventh grade year but her mother has unexpectedly been asked to go to New York City for her new job and Will, traveling with his mom and two sisters, returning from a trip to Disney World to their home in Shanksville, Pennsylvania.  It is the one year anniversary of Will's dad's death.  Briefly their paths intersect.

In alternating chapters we become further acquainted with each character.  We follow their thoughts, conversations and activities on September 10, 2001.  Each one of them is facing emotional hurdles.  Each one of them is being challenged by circumstances over which they have little control and choices they need to make.

Sergio confronted by his past skips a day of school, meeting a man who will profoundly change his life. Naheed, teased by boys in her science class about her hajib, regrets a response made to her lab partner.  Girls at her new school have Aimee wondering if her parents are headed for divorce.  A bike ride after school does not go as expected with Will's friends and Claire, a girl whose affections he wants to win.

These seemingly normal happenings are not quite usual in the context of these characters' lives as we are given more elements to their stories.  Each new detail adds to the growing tension before September 11, 2001.  On that unforgettable day you will hardly dare to breathe as you turn the pages. As you read about September 11, 2002, at Ground Zero, New York City, your heart will sing with hope.


At nErDcampMI 2016 I was one of the fortunate ones able to attend the session Healing Through Words: Two Authors discuss 9/11 and Coping with Tragedy through a writer's lens by Gae Polisner and Nora Raleigh Baskin.  I knew before hearing their words of the meticulous research and painstaking attention to detail given to this topic by reading Baskin's story of Sergio, Naheed, Aimee and Will.  Her ability to describe their individual worlds with clarity and insight help us to connect and identify with each of them.  Although they were each distinctly different in their backgrounds and cultural heritage, Baskin allowed us to see universal commonalities.  They are all Americans.

Of particular interest in her writing technique is beginning with reflections about the morning of September 11, 2001, then moving back two days, then one day and then to the day of the attacks.   Adding to the underlying tension are the chapter headings of the date, exact time and geographical location.  We move through time zones and between Brooklyn, New York, Shanksville, Pennsylvania, Los Angeles, California and Columbus, Ohio. The final chapter one year later is poignant and extremely relevant.

In making her characters more fully alive to readers Baskin includes conversations with family members, friends and classmates.  The narrative text is a running commentary about each specific situation along with particular thoughts in italics for emphasis.  Here are several sample passages.

"I'll take an English muffin if you'll make one.  I gotta go back up and get my sneakers," Will said.
His mother burst into action, fussing like a frantic chicken.  She was almost more at ease when she was rushing about nervously.  When Will came back downstairs, she was standing with his breakfast wrapped in foil.
"You're so good to me," she said.
So he hadn't fooled anyone pretending to be hungry.  His mother kissed him on the cheek and then pushed him toward the front door.  There was an invisible wall between the world out there, where his father's death wasn't ever-present, and the world in here, where it always was.  Will felt it blocking him, tugging at him every time he had to leave the house.

"Yeah, Naheed.  Why do you have to wear that?  Isn't it hot under there?" Tommy asked.
It wasn't.
Sebastian laughed.  "I remember in third grade when you first wore it.  I thought you had lost all your hair, like you were sick or something.  Isn't that crazy?"
Yes. In fact, Naheed had long and very thick black hair.  It was one of the things she loved about herself.  It was just like her mother's.
"So why do you, Naheed?" Eliza asked one more time.
Wearing pajamas to school might have been better than this.  The last thing she wanted to do was explain why.  It was as if all of a sudden Naheed was a giant in the room with an endless skein of cotton on her head and everyone was staring at her, and it.


Nine Ten: A September 11 Story written by Nora Raleigh Baskin will capture your attention from the first page to the very last sentence.  Once started you won't be able to stop reading until you have it finished.  I highly recommend it to individual readers and as a class read aloud.  At the close of the book in seven pages Baskin supplies further explanations in her author's note and acknowledgments.

To learn more about Nora Raleigh Baskin and her other work please follow the link attached to her name to access her website.  At the publisher's website an excerpt from the book is available for you to read.  At the Nerdy Book Club site Nora Raleigh Baskin talks about this book in a post.

Nora Raleigh Baskin has placed a post on her blog inviting educators to share their 9/11 stories.   This is an opportunity not be be missed.
Posted by Xena's Mom at 11:37 AM