Power Of The Human Voice

As an educator and storyteller there is one moment in the 1987 film Three Men and a Baby which stands out more than any of the other, albeit, funny incidents.  It focuses on reading aloud and the sound of the human voice.  Do you remember this?

When reading aloud to our children and students, without a doubt the words and images on the page convey more than we can fully understand given the life experiences each listener brings with them but our vocal interpretations have the ability to heighten those words and images.

If this is our belief, let's take it a step further to the cultural artistry of oral storytelling.  There are several versions of a tale regarding the placement of televisions in the homes of an African village.  Upon visiting the village an anthropologist notes the televisions have been removed from the homes and stacked in storage.  When the village elder is asked why his people would give up the opportunity to listen to and view more stories than they have ever heard from a traditional teller, his reply is the storyteller knows us.  The gift of storytelling is a personal connection.  The spoken words are passed from heart to heart, sometimes for generations. 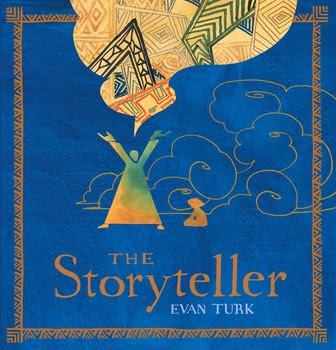 No matter how many times a well-told tale is heard the power does not diminish, it grows.  The Storyteller (Atheneum Books for Young Readers, an imprint of Simon & Schuster Children's Publishing Division, June 28, 2016) written and illustrated by Evan Turk is such a tale.  On the first reading it envelopes you and does not leave.  With each subsequent reading, your reader's heart expands with its power.

LONG, LONG AGO,
like a pearl around a grain of sand, the fertile Kingdom of Morocco formed near the edge of the great, dry Sahara.

In the beginning water and storytellers were bountiful in this kingdom.  Over time the people took this generosity bestowed upon them for granted.  Water no longer flowed from the fountains and one by one the storytellers faded from their midst.  Out in the great Sahara this was noticed.

A young boy longing for water wandered in the Great Square one day receiving the gift of a brass cup from a water-seller.  This seller had no water but he encouraged the boy, if he found water, to give some to others.  As the boy made his way home, an ancient voiced called out to him.

As requested the boy sat down being told by the elder his thirst would be quenched.  The boy listened as a tale was told of a blind woman, a young girl, plentiful water and a fantastical blue bird.  At the end of the story, the child's brass cup was full of water.  When the boy asked a question, the old man told him to return.  In the desert something grew larger.

For the next two days, the boy returned to the ancient one and heard two more wondrous stories.  In the desert the size of the sandstorm had grown so large it covered the light of the sun.  As the third tale ended, the enormous swirl of dust appeared at the gate of the boy's city.  It assumed the shape and voice of a demanding genie bent on destruction.


When you begin reading this narrative by Evan Turk time truly stands still.  The words, the blend of conversation and narrative Turk uses dissolve the world around you until everything is this story and this story alone.  You are drawn to the ancient one as surely as if you are the boy; then you become the other characters in the other stories.  The connection is strong.

Turk employs the rule of three more than once generating a cadence.  He also uses a singular phrase over and over---

that is a story for another day.

Tension and anticipation appear in equal measure when in the Great Square stories unfold as danger builds in the desert.  Here are two sample sentences.

The man's face cracked like dry mud to reveal a toothless grin.  "Sit down, my boy, and your thirst shall be quenched."
The old man's voice rumbled like a spring from deep within the earth, and he began:
Not so long ago there was a terrible drought in the nearby villages.


The matching dust jacket and book case promise great things to readers. With raised arms the teller speaks as a child listens.  Is the shape his voice or is it the bird?  The clouds of the Sahara dust rise around them.  To the left, on the back, text appears within the frame of a Moroccan doorway.  Gold foil creates majestic boundaries.  A collage of textured fabrics supplies a geographic display of Morocco, the surrounding countries, the Atlantic Ocean and the Mediterranean Sea on the opening endpapers.  Large indigo brush strokes over textile patterns appear on the closing endpapers.  It is here Evan Turk supplies readers with an informative and passionate Author's Note.

The illustrations in this title rendered in water-soluble crayon, colored drawing pencils, inks, indigo, sugared green tea, a heat gun and fire all span two pages in breathtaking, exquisitely detailed splendor.  Each image asks us to stop to enjoy the visual story being told as it enhances the text.  I found myself looking for a center in each of them, knowing all the other elements were radiating from this focal point.  When the old man is speaking to the boy, a very specific border, intricate in design, encloses those portions of the picture.

One of my many favorite illustrations has a more limited color palette than the others using shades of blue and brown predominantly.  To the left the young girl who has been sent to speak with the blind woman is gazing at her expectantly.  The old woman with eyes closed, picturing the story as she speaks, has her hands raised near her face.  In front of her is the blue bird.  The patterns on the clothing worn by both are truly lovely.


The Storyteller written and illustrated by Evan Turk is stunning in words and images.  This book casts a spell over readers, a spell which lingers even after the covers are closed.  This is a title to share repeatedly.  I highly recommend it be placed on your personal and professional shelves.

To learn more about Evan Turk and his other work please visit his website and blog by following the links attached to his name.  A website is devoted to this title with a link here.  Be sure to follow the link to a Publishers Weekly highlight on The Storyteller in pictures.  Interior images are available for you to view at the publisher's website.  Evan Turk is a featured guest at author, reviewer and blogger Julie Danielson's Seven Impossible Things Before Breakfast.  It's a virtual children's literature feast of information.  The premiere for the book trailer is showcased at Scholastic's Ambassador for School Libraries John Schumacher's blog, Watch. Connect. Read.  Enjoy the video below as Evan Turk talks about a portion of his illustrative process.

UPDATE:  Evan Turk is a guest on the All The Wonders Podcast, Episode 271 with teacher librarian Matthew C. Winner.

UPDATE:  All The Wonders has an entire page devoted to this title with a range of activities November 14, 2016