On more than one occasion I have been aboard a sailboat in the Atlantic Ocean only to wonder if my last moments on this earth were quickly approaching. An unforeseen gust of wind changes the tilt of the deck nearly throwing me overboard.  Luckily my cheekbone became friends with the rigging; a baseball-size bump being my only souvenir.  A blue sky quickly turns black as a squall blows in.  When the captain, who never wears a life-jacket, dons his and asks everyone else to put one on, you feel fear travel from the top of your head to the tip of your toes in mere seconds. 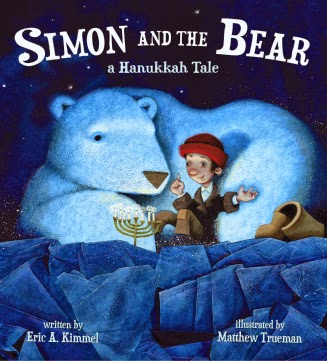 For these reasons those hardy souls who traveled, in conditions fit for neither humans or animals, across oceans to seek a better life have my utmost respect.  To do so alone without the company of a single friend or family is truly commendable. Simon And The Bear: a Hanukkah Tale (Disney Hyperion, September 2, 2014) written by Eric A. Kimmel with illustrations by Matthew Trueman traces a journey filled with one marvel after another.

When Simon set out for America, he promised his mother and brothers and sisters that he would work hard and save money.  As soon as he could, he would send tickets for all of them.

His mother packs his knapsack to the brim with food and several traditional items for observing Hanukkah.  He has hard-boiled eggs, salted herring, heavy black bread and lots of latkes.  A dreidel, matches, a box of candles and a small menorah are carefully placed inside.

Simon's luck begins when he purchases the final ticket on a ship sailing to America.  Nothing, not even the rolling ship, can discourage his joy at getting closer and closer to his destination.  This happiness is short-lived when during the night the boat begins to sink after striking an iceberg.

When Simon goes to climb on the last lifeboat after helping others to safety, a man calls out to have them wait.  Unfortunately there is no more room.  He throws a family heirloom to Simon to give to his son.  What happens next clearly demonstrates the true character of Simon.  He trades places with the man.  Can you imagine how he feels watching all the lifeboats leave without him?

As the ship sinks into the icy waters Simon, knapsack in hand, leaps.  Does he land in the water?  No!  He finds himself standing on the very iceberg responsible for destroying their vessel.  As the gravity of his situation threatens to overcome him, he remembers his Mother's parting words.  This is the first night of Hanukkah.  Perhaps a miracle will happen to him. He uses the shamash to light the first candle.  He spins his dreidel hopefully.

Soon the little light from his candles sputter out. Plunged in darkness Simon hears and sees something new.  I'm sure his heart nearly stops when a huge white bear joins him on the iceberg.  His guest enjoys the food his mother knew he would need.  Well...most of it.

The two, shipwreck survivor and mother ice bear, develop a relationship over the course of seven days and nights.  On the eighth night Simon is hoping for one more blessing as the light from all the candles glows.  Without warning, again surrounded by only the moon, stars, dark and the silent sea, the bear who has kept him warm every night stands and swims away.  Simon calls out in fear.  The night provides a reply.


Whenever I begin a tale crafted by Eric A. Kimmel, I feel as if I have walked through a door into a simpler life when nightly stories told around a fire burning for warmth would entertain eager listeners.  Even though they might take place in another time or place, he brings them to the here and now to make a print upon your reader's heart.  His narrative speaks of beliefs not only essential to his Jewish character but profound truths about life.

Specific word choices form sentences binding you to narrative while introducing you to terms associated with Hanukkah.   Similes draw you into significant moments.  Dialogue endears you to the characters. Here are two sample passages.

His bunk was in the hold, with three hundred other people packed together like herring in a barrel.  When the ship sailed, the barrel began to roll.

"Are you hungry, bear?" Simon said brightly, trying not to show his fear.  Slowly and carefully, he opened his pack.  "Have I got a treat for you!" he said.  He handed a latke to the bear, who gobbled it down.
"Delicious, isn't it? Have some more," Simon cooed.  "Better to eat latkes than to eat me!"


Look at the face of Simon on the front dust jacket and book case.  It's happy in the light of the Hanukkah candles.  As he tells his stories an attentive bear curves around his body listening.  Readers are already questioning how Simon came to be celebrating Hanukkah sitting on ice next to a bear.  On the back a separate image shows only the head of the bear as it moves through the water.  The text reads

Miracles can happen to anyone,
anywhere,
even in the darkest of times.

The opening and closing endpapers are a northern night sky filled with stars.  The only difference is at the end a crescent moon hangs in the upper left-hand corner.  Beneath the title Matthew Trueman has placed a small oval picture. On a shelf of ice sits the menorah.  Next to it are two large bear prints.  This oval shape is used again to feature potato latkes wrapped in paper, a dreidel and a menorah, with all its candles burning, on an icy surface beneath the author's note at the end.

With the exception of four single images, all of Trueman's illustrations span two pages.  Each one creates an unmistakable atmosphere laden with emotion; the sadness of leaving, the excitement of a grand new adventure, the fear of an impending disaster, the hesitancy in making choices, the overwhelming sense of being alone in a vast unfriendly place, the comfort of custom, the relief of companionship and the gratitude of receiving miracles.  Deep blue hues and shades of white act as an excellent choice for those scenes highlighting the colors used for Simon and the goodness found in his knapsack.  The first and final illustrations offer a fuller range of color portraying familial love.

One of my favorite illustrations of several is of the ship sinking, the deck on a tilt.  Upon looking through the railing the night sky is displaying its usual starry brightness.  Ship windows are still yellow with light.  On the deck is the man in the fur coat, his arm extended after throwing his watch to Simon.  Two other passengers can be seen with him in the life boat waiting to be lowered.  This is a major turning point in the story.  Trueman brings us in close so we can see all the facial expressions on his characters.  I've always liked the way he does faces with his own signature depiction of eyes, noses, ears and mouths.


Heartwarming to the core Simon And The Bear: A Hanukkah Tale penned by Eric A. Kimmel and pictured by Matthew Trueman is an exceptional choice for a holiday book; a perfect blend of the work of a master teller of tales and an accomplished illustrator.  I highly recommend you give it a place on your shelves.  A brief author's note at the end offers explanations for the original miracle of the lighting of the menorah, the preparation of latkes and the spinning of the dreidel with its letters.

Please follow the links embedded in Eric A. Kimmel's and Matthew Trueman's names to access their websites.  Each provides additional information about their other work.  This link takes you to TeachingBooks.net for a pronunciation of Eric A. Kimmel's name.
Posted by Xena's Mom at 11:14 AM