An early snowstorm comes in mid-November causing hundreds of schools to close.  The normal chatter in the household on a snow day is suddenly replaced with careful whispers.  Drawers, cupboards and even the refrigerator are being slowly opened and closed.  Coats, snow pants, mittens, hats and boots are taken from closets.

After a chorus of "We're going outside", silence descends.  When several of the carrots prepared for dinner are discovered missing, a realization begins to form in your mind.  A trip to the front window confirms your suspicions. A snow family is taking up residence on your lawn. 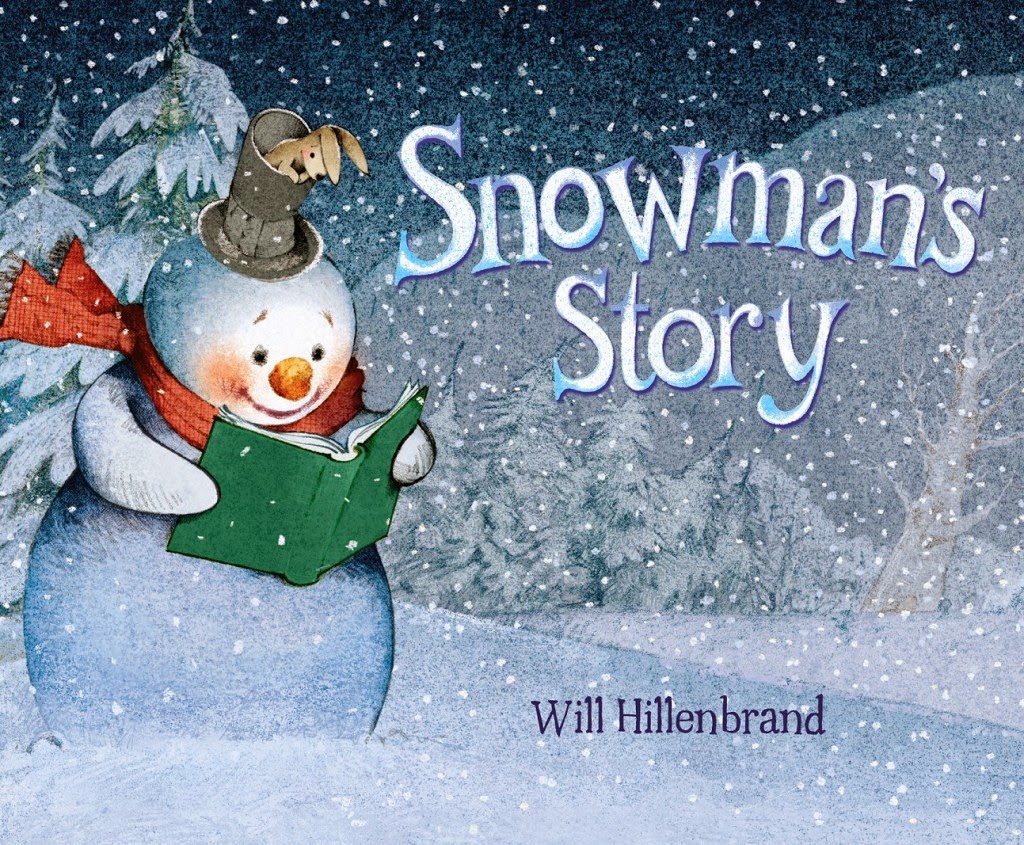 As evidenced by numerous prints on a white-blanketed field, perhaps humans are not the only ones to enjoy winter's deposit.  Snowman's Story (Two Lions, November 18, 2014), a wordless tale, written and illustrated by Will Hillenbrand takes readers into a creatures' world on a snowy, blowy day.  Is it only the wind or is there a bit of magic in the air?

A fancy top sits in the center of the title page as snow swirls around, evergreens coated in white stand behind it, silent sentries.  In the distance an owl flies.  On the verso and dedication pages, the owl swoops in grabbing the hat in its talons only to have it pulled away.

A bunny notices the fallen hat lying in the snow.  Crawling inside its eyes, wide with surprise, are soon seen peeking through the top as the hat is caught on the wind's currents.  It settles quietly on the head of a newly made snowman.  A bear, fox and penguin watch as their new creation comes to life.

Their wonder only increases when a book placed in the snowman's hands is read aloud.  As a crescent moon appears on the horizon good nights are said.  All this time the wily rabbit has been as quiet as the proverbial mouse.  Every so gently it comes out of hiding and...grabs the book and runs!

An alarm is sounded by the man of snow awakening the penguin, fox and bear from their slumber in a nearby cave.  All follow the thief as he heads toward the edge of a cliff.  Can they conquer the chasm, climb a mountain and best the bunny in a snowball battle?  Spotting his tracks in the snow, they find themselves standing in front of a wooden door tucked in the base of the tree.  Behind the door more surprises await the companions.


As you look at the opened matching dust jacket and book case, your eyes see from left to right, back to front, a scene right out of a cherished snow globe, full of good cheer.  There's a hush in the air as the snow falls.  It appears both the snowman and rabbit are reading.  The same dark forest green on the book is used on the opening and closing endpapers.

Will Hillenbrand begins his story on the title page, not wasting a single moment to engage readers.  Rendered in

his illustrations will charm readers with the lively characters whose facial expressions and body movements are absolutely delightful.  How can you not smile at the rabbit hiding in the hat with only the tips of its ears showing?  Softer shades of blue while evoking the chilly out-of-doors work beautifully with the warmer hues of brown, rusty orange, gray, and red used in depicting the animals and the snowman's scarf.

To establish a desired pace Hillenbrand alters his picture sizes framing single pages in white or showing a single page edge to edge.  An individual image may extend across two pages or a page may be divided by two, three or four smaller illustrations.  To focus on a significant moment a smaller visual might be placed in the corner of one that is larger. A wonderful flow is established with elements from one illustration continuing into another or stretching beyond a border.

One of my favorite pictures is one of several scenes when the perspective shifts.  We are looking down on the top of the snowman as his friends are applying finishing touches to their creation.  They are looking up as the hat falls from the sky.  Most of the hat is pictured moving down from the upper left corner.  All we see of the rabbit are two very wide, dark eyes and two ears standing at attention from the top of the hat.  This picture is loaded with anticipation and promise.


Even though this tale, Snowman's Story, written and illustrated by Will Hillenbrand is set in the wintry outside, it is brimming with warmth.  No one can resist the lure of a good book.  I expect this one to be requested over and over again by readers establishing it as a beloved seasonal tale.

I invite you to visit Will Hillenbrand's website by following the link embedded in his name.  He has several videos about his process and workspace.  Educator and blogger at Kid Lit Frenzy, Alyson Beecher, was part of a blog tour for this title.  She has an excellent interview with Will Hillenbrand there.  A couple of fun activities are included in the post.  Enjoy the book trailer.


You might want to use this title in conjunction with Making a Friend by Alison McGhee with illustrations by Marc Rosenthal and other listed with this previous post.
Posted by Xena's Mom at 7:15 AM