For fans of games like Scrabble or Boggle mixing and matching letters to create words is not only a challenge but fun.  At the mere mention of anagram, their eyes light up and grins spread across their faces.  Perhaps they see letters everywhere they look as did the creator of Alphabet City (Viking, 1995) Stephen T. Johnson or maybe they see the potential in turning a letter into an object which begins with that letter like The Graphic Alphabet (Scholastic, 1996) by David Pelletier. 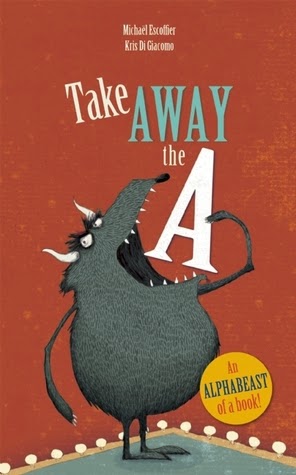 Reading the newest alphabet title from Enchanted Lion Books I couldn't help but think of all those people who have love for team twenty-six.  Take AWAY the A: An ALPHABEAST of a book! (September 9, 2014) written by Michael Escoffier with illustrations by Kris Di Giacomo stretches possibility into the world of fantastic.  These animals and plants certainly know how to make the best of a wayward letter.

Without the A
the BEAST is the BEST.

Without the B
the BRIDE goes for a RIDE.

As we move merrily forward, we encounter a chair in need of a brush, comb or even a curling iron, frozen water inhabiting a card game and a group of large mammals trapped for the time being.  There will be scars and love but not scars from lost love.  Climbing of trees and stairs will provide exercise for the characters.

Jelly takes a backseat to jam, a primate prospers, and plants make a fashion statement.  While arriving at the sought after peace of a pastoral setting seems hopeless, well-known nursery rhyme characters could be in for a surprise.  A quartet makes the decision to bundle-up against possible cooler temperatures.

Dinnerware provides doom for tiny creatures in the wrong place at the wrong time.  Believe it or not losing the q leads to a day of fun and frolic.  With a page turn we see a crustacean is in need of transportation.

A drastic change in weather, too many snakes and an insect relative lead us toward the alphabet end.  We have seven, an itch and foes following along.  The value of sharing with others heightens as everyone takes the stage realizing the importance of z to a song forever embedded in our minds.


The ability to find twenty-six words when a letter is removed which make perfect sense when combined with another is mind-boggling.  Which word did Michael Escoffier think of the first?  Did he think of best or beast, dice or ice or moon or moo?  His sentences sometimes rhyme or create an alliterative thought.  Most of the words will be easily understood or, as in the case of FAQIR, will promote discussion or even the use of a dictionary.  By the time the final page is turned readers will come to understand Escoffier has been building sentence by sentence a wildly wacky title brimming with subtle and not so subtle humor.


When you first open the matching dust jacket and book case, the first thing popping into your mind is a monster is loose gobbling up the letters of the alphabet.  It would appear he is the star of a show highlighting this feat.  On the back (to the left) we see a wee white mouse floating above the clouds by means of an umbrella getting closer to a strand of stars in a night sky.  The identical opening and closing endpapers in spring green with white feature rows of typeface, some askew, of the letters of the alphabet in order.  A turn of the page shows the mouse now with a red balloon still floating near the initial title as a taxi driven by a duck carries a rabbit to its destination.  The more formal title page has the crab as the culprit, grabbing the A.

Twenty-six illustrations span double pages for each of the letters in an array of subdued colors providing a soft texture.  Kris Di Giacomo's interpretation of Escoffier's sentences is at times absolutely hilarious, whimsical, tender and may tell a tale of their own.  In the sentence

Without the M
the FARM is too FAR.

a barn is seen in the distance as a road winds over several hills.  In the foreground a pig and a rooster, clearly exhausted, are sitting on suitcases next to the road.  Stopping next to them in a red car is a grinning wolf with the license plate reading LUP 1.

The white mouse first introduced to readers on the dust jacket and book case is a recurring character in most of the illustrations as are a number of its companions.  Characters seen in one illustration may pop up in another with their role changed; the dog for the letter C is later seen driving an airplane.  Like Escoffier Di Giacomo brings in her own style of humor; for

it's animals at a tea party dressed to the nines in fur-trimmed coats.  Elements from nursery rhymes or fairy tales appear too.  The final two pages before the closing endpapers are very clever.

One of my favorite illustrations is for

Without the I
STAIRS lead to the STARS.

The illustration from the back of the dust jacket is expanded to show a staircase on the right coming from the clouds.  At the tip top an owl is reaching out a wing to touch a star.  Careful readers will notice the stars are hanging by tiny strings.

This is by far one of the more unusual but utterly fun alphabet books, having appeal for all ages.  Take AWAY the A: An ALPHABEAST of a book! written by Michael Escoffier with illustrations by Kris Di Giacomo is a must purchase for word lovers.  Besides the entertainment factor, the potential for use in the classroom is high.  I can't imagine not having this on my personal or professional shelves.


If you want to see several spreads from the book head over to a review by teacher librarian and blogger Travis Jonker at 100 Scope Notes.  This link takes you to a Facebook page where Enchanted Lion Books has posted a book trailer.
Posted by Xena's Mom at 8:20 PM