From His Jolly Old Self

You may have heard Nicholas was born in a country know as Turkey today.  Even as a child he was well-known for his generous spirit and care for others.  At the time of his parents' deaths due to a plague, he became a very wealthy man.

You may have read prior to his becoming known as Saint Nicholas a story about him using his wealth to aid a nobleman, now living in poverty, by providing dowries for his three daughters.  On individual nights he tossed a sack filled with coins through the girls' bedroom window.  On the final evening the sack is said to have landed in the youngest girl's stocking.

You may have discovered a tale about him becoming the youngest bishop to ever serve; being so named in the town of Myra near his birthplace.  During his time as bishop (and even after his death) there are several miracles attributed to him regarding his saving children by bringing them back to life.  It is believed Nicholas died on December 6, 342 or 343.

You may have learned this date was a well-celebrated feast day in Europe during the Middle Ages.  The goodness of Saint Nicholas began to be associated with gift giving during Christmas in certain countries.  In time this custom crossed the ocean as colonists settled in America. 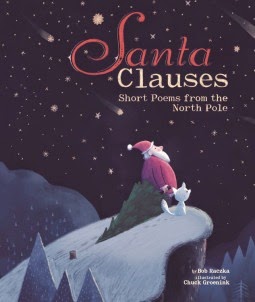 You may be familiar with a particular visit by St. Nick as recounted in Clement C. Moore's The Night Before Christmas vividly describing the man, his sleigh and reindeer.  But I'll bet you didn't know Santa Claus is quite the poet, specializing in haiku.  Santa Clauses:  Short Poems from the North Pole (Carolrhoda Books, a division of Lerner Publishing Group, Inc., September 1, 2014) written by Bob Raczka with illustrations by Chuck Groenink reveals this beloved figure's literary genius.

This first poem and the twenty-four others are inspired by a bookish gift of haiku poetry given to him by his wife.  Word by word, syllable by syllable, and line by line, Santa writes each one on his faithful typewriter for our reading pleasure.  We get an insider view of life at the North Pole during this busiest month of the year.

Walking outside we might see the effects of a snow hare's hunger on a snow elf or see Mrs. Claus enjoying the delights of first snow.  Santa, keeping his pathways safe, is thinking of treats waiting inside for him.  Tying and untying bows and knots are pleasant or not so pleasant tasks.

One of the reindeer does more than guide his sleigh offering assistance under the stars.  Moonlight and shadows cast their own spell.  A workshop is filled with a symphony of noise.  Stolen kisses under mistletoe add cheer to work.

Trees are trimmed inside by one jolly old elf and outside by the frozen weather.  Nighttime visits with the reindeer, strings of light around a home and spread across an Arctic sky and the fragrance of baking cookies fill the hours with sensory delight.  Stories read by a fire in a darkened room end the day.

Candy canes are consumed, sawdust is swept and wolves sing at the moon.  Christmas Eve and Christmas Day are getting closer.  Reindeer listen, elves sleep and Santa dresses in his suit of red. From high in the sky a landscape spreads below.  Now we know how it goes at the North Pole.


How I wish I could have been privy to the thoughts swirling around in Bob Raczka's mind as he formed these poems.  It's as if he walked with Santa for these twenty-five days.  I can see him standing still in a moment; watching, listening, touching and smelling. His depiction of the everyday is simple but profoundly beautiful.  At all times a touch of humor, lightness in his words can be felt as well as a reverence for the outside world.  Here is one more poem.

Rendered in pencil, gouache and Photoshop each image lifts the words in companionable warmth.  The two page spread across the matching dust jacket and book case invites you into Santa's world at the North Pole.  You can hear the silence, understand the awe he and his dog feel looking at the stars and feel the crisp, clear air.  Carrying over the shade of blue from the night sky on the opening and closing endpapers for a background, Chuck Groenink has placed a pattern of snowflakes, bells, Christmas trees, candy canes, a wrapped package, holly, stars, mistletoe, a glowing candle, a Santa hat, Christmas ornaments, and gingerbread boys; no two are alike with the exception of the cookies.  The colors used are hues of red, green and white.

Opposite the title page is Santa's desk.  I would love to sit in the solitude portrayed in that picture; a window showing snowflakes falling, a chair at a tidy desk displaying a cat on a book, a typewriter, paper, a mug and a vase holding a spring of evergreen with a single ornament.  Subsequently Bob Raczka's introduction is shown on a piece of paper nearly rolled out of an old manual typewriter.

Every page turn reveals a different image size with the text displayed as if written on a typewriter; the dates in red, the poems in black.  The larger font size is not a distraction but a welcome addition to each scene.  Groenink might extend elements from one illustration to the next page displaying a smaller visual framed with a liberal amount of white space.  In turn this is followed by several two page pictures, a single page image and a smaller one framed again in white.

There is an old world, cozy quality to each scene, the details bringing readers into this alternate North Pole world inhabited by Santa, Mrs. Claus, the elves and reindeer within Mother Nature's realm.  Santa's mailbox has a grinning mouth painted on the side giving the impression the letters are coming from this animal.  An old wood stove warms the workshop with a pot and kettle sitting on top.  Santa's residence is a log home several stories high.  The light over the kitchen table is filled with candles; drying herbs hang from a pole nearby and a cuckoo clock is seen on the wall.

One of my favorite illustrations is the one for the second quoted poem.  Groenink uses the beams in the barn to frame Santa dressed in a wooly coat, sky cap on his head, hot pot next to him on a bale of straw as he holds a book reading to the reindeer.  The reindeer are gathered around him, eyes watching and ears up listening.  A single lantern hangs above Santa's head.  Outside the tiny window snow is falling.


Every collection, every book shelf needs to have at least one copy of Santa Clauses:  Short Poems from the North Pole written by Bob Raczka with illustrations by Chuck Groenink.  It is sure to become one of those classic books to be read year after year welcoming the Christmas holiday.  It has my highest recommendation.

To learn more about Bob Raczka and Chuck Groenink please visit their websites by following the links embedded in their names.  If you select this title at Groenink's site you can see several illustrations from the book, including one of my favorites.  UPDATE:  Please visit this page at Kirkus. Author Julie Danielson interviews Bob Raczka.