One of the best perks of online social networks for readers is discussing books to be read, books currently being read and books finished.  Nearing the end of my most recent lengthier book, two tweets from a long-distance colleague appeared on Twitter.

Almost done with Egg & Spoon. Reading this passage I am struck once again with the brilliance of words… http://t.co/oJJD8VOGht
— Katherine Sokolowski (@katsok) December 8, 2014


I had been reading a few chapters a day because the language is rich and refined but after those two tweets I couldn't wait to discover what the ending revealed.  When I finished on the morning of December 13th I was stunned at the inventiveness of this title and...I was moved to tears too. 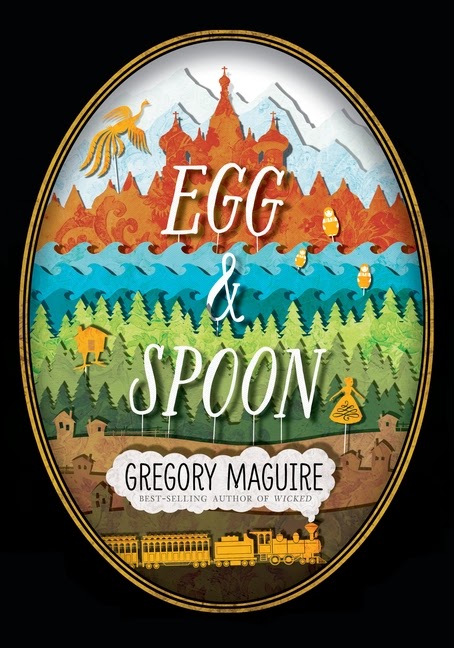 Egg & Spoon (Candlewick, September 9, 2014) written by Gregory Maguire is set in the Russia ruled by Nicholas II, son of Alexander III and Maria Feodorovna.  Timeless legends exist and shape a classic case of mistaken identity.  Wrongs need to be reconciled with the clock ticking toward disaster encompassing the whole of the country.

Before.
THE HEELS OF MILITARY BOOTS, STRIKING MARBLE FLOORS, made a sound like thrown stones.  The old man knew that agents were hunting for him. He capped the inkwell and shook his pen.  In his haste, he splattered the pale French wallpaper around his desk.  That will look like spots of dried blood, he thought, my blood.

A monk, whose name is of no importance until the end of this tale, is imprisoned in a tower for one thousand days.  Several times during the course of five parts, containing eighty-two chapters, his singular voice offers a pause in his writing of this narrative.  He asks us to think about story, strangers and heroes, Noah on his ark with his wife, children's games, acts of nature, cycles of life, care for others, magic and children.

Elena lives in a group of homes, barely a village, plagued with poverty, starvation hanging heavy in the air.  Her father has died, as have all the other young women.  Luka and Alexei, her two brothers, have left, leaving her to care for her dying mother.  The one is taken before her very eyes to serve in the army; the other when a land owner's household leaves for Moscow.  Her only supporters are a horse doctor named Peter Petrovich Penkin, a good man, trying to care for the remaining villagers and an aging woman called Grandmother Onna.  A freak storm and a lightning strike herald big changes and opportunities.

A sight Elena has never seen rolls into Miersk on tracks in the form of a train.  People of wealth and privilege are traveling toward Saint Petersburg.  It is Elena's desire to go to this city to plead before the Tsar for the return of her brother Luka.  Although it is not part of her plan, she will soon be on that train headed toward her desired destination.

Accompanying her great-aunt Madame Sophia Borisovna Orlova on this train, Ekaterina is to be presented at court during a festival honoring the Tsar's godson.  At thirteen years of age, she sees a possible engagement with a sense of impending doom.  As her station prevents her from being a true friend with Elena, a give-and-take daily conversational exchange starts and continues between the two as repairs are made to the lightning-damaged bridge.  A Faberge egg made as a gift for the Tsar, designed to have three interior scenes, by Great-Aunt Sophia further alters lives adding yet another layer to this tale.

The first part of this adventure ends as the train jerks to a start with Ekaterina, Cat, somersaulting off the platform cradling the egg in her arms to protect it.  Elena is trapped on the train by fear.  The people of Miersk live in fear of retribution with Cat in their midst.  Cat leaves in fear for her life.  Her governess, Miss Bristol and the butler, Monsieur d'Amboise are terrified.  There is so much fear.  Deceptions by more than one party are about to begin in earnest.

The three depictions inside the Faberge egg from legends of the land, Baba Yaga, the Firebird and the ice- dragon, are very real indeed.  Baba Yaga, hag with iron teeth, enjoying children as entrees, is currently deep in a woods living in her home, Dumb Doma, supported by chicken legs ever ready to mobilize.  Bound by a curse, a Siberian tiger, assuming the form of a cat, is her current house guest.  The  Firebird has recently landed in a forest further down the train tracks.  Elena and Cat are about to encounter one or the other.

As the characters get nearer to their destinations it becomes clear the landscape of Russia, the legendary beings and the heart of magic are under attack. The festival, a beloved matryoshka doll, the Prince attending incognito (Anton the godson who craves nothing more than adventure not marriage), imprisonment, eggs lost and found, and a forgery force four plus Mewster to travel to frozen lands at the top of the world.  The scales need to be righted, with harmony restored, or life as all know it will easily slip away.  You will have to remind yourself to breathe as every chapter races toward the resolution; a resolution filled with so much love and hope your heart will hardly be able to hold it.


Within short order my copy of Egg & Spoon began to fill with sticky notes.  It was all I could do not to get out a yellow highlighter. Gregory Maguire's use of language is marvelous.  Every single character with their nuanced personalities is fully developed.  We are privy to this through dialogue and thoughts.

Cinematic descriptions of settings envelope the reader.  Intricacies of history, politics and the class system are woven into every facet of the adventure.  Whether you believe in Baba Yaga, the Firebird or the ice-dragon, you will definitely expect to see them should you ever travel to this part of the world.

At the core of this story (even at the heart of Russia as you will learn) is Baba Yaga.  Here Maguire excels in giving readers comic relief in her snarky life observations.  Through her contemporary references to a future hundreds of years in advance you will find yourself laughing out loud.  Although she views humans and their lives with negativity, she is positively full-steam-ahead in addressing each situation.

Here are several marked passages from the book.

Sooner or later you realize that everything you experience, especially something like being arrested, is never only about you.  Your life story is really about how the hands of history caught you up, played with you, and you with them.  History plays for keeps; individuals play for time.

What a worthless trade, thought Elena.  All those clouds brashing down the sky, bellowing their opinions and knocking down church steeples.  And the only thing that matters to the people of Miersk?  A sensible snowfall befitting the season?
Not a flake of it.  Full of static and sizzle, the clouds swagger on toward the Urals.  They drag the dry tails of their purple greatcoats behind them.

"I don't know what the crisis is," muttered Great-Aunt Sophia, "but have you ever noticed that the world can hardly fail to be beautiful even when it is falling apart?"

"Oh! Slumming.  What fun," said Baba Yaga.  The mirror worked up a new outfit and showed Baba Yaga sporting a head scarf and a pair of spectacles with elongated, translucent frames that came to a glittery point on each end.  She was sheathed in a slurry-colored coat that plunged cylindrically to the floor, a fulsome tree trunk shorn of its bark.  Drooping from her hands, two overladen paper sacks with handles.  On their sides, in English, the sacks said BLOOMINGDALE'S.


Egg & Spoon written by Gregory Macguire is a beautiful blend of Russian history and legend, mystery and magic, the feasible and the unbelievable woven together by a master wordsmith.  It's an exploration of the human condition at its very best and those moments when it leaves much to be desired.  I guarantee there will be portions you mark or underline for repeated readings.  I think this would be an excellent title for a book group.

To explore this title further please follow this link to the publisher's website.  There you will find a sample chapter, a Q & A with Author Gregory Maguire, a discussion guide and author's note.  This link takes you to another page highlighting other works by Maguire.  Teresa Kravtin, a publisher's rep has compiled an outstanding post on her blog, A Rep Reading.  Here is a link to an interview posted at Here & Now.