A good book, a movie marathon, a cleaning frenzy or a game night with friends may be one of the reasons we gladly relinquish the necessary eight hours of rest recommended for adults.  On the other hand sometimes our not-so-good friend insomnia may pay us a call.  Eventually these types of nights catch up with us until we can hardly stay awake; craving rest at all costs. 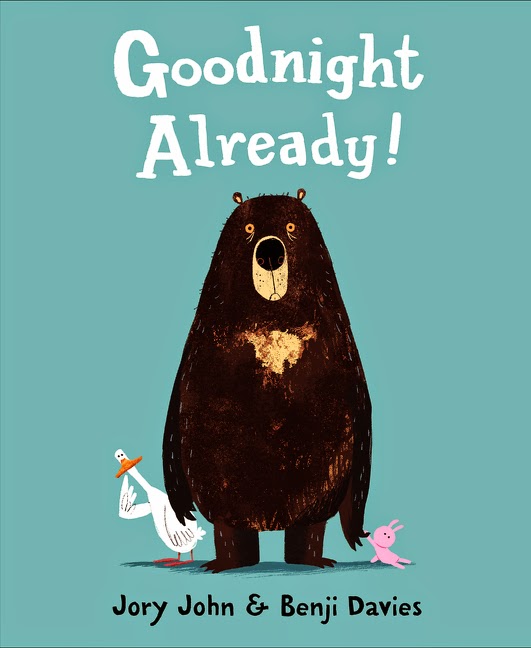 On those days when we visualize sleeping every waking minute, snuggling cozily under the covers, and drifting off into a dreamless doze, there is a chance our plans may change.  In Goodnight Already! (Harper, an imprint of HarperCollinsPublishers, December 2, 2014) written by Jory John with illustrations by Benji Davies, a bear and his next-door neighbor, a duck, have decidedly different desires.  Their needs and wants simply don't mesh.

"I've never been so tired.  I could sleep for weeks. Months, even!"

Being the proverbial bright-eyed and bushy-tailed character, Duck walks over to Bear's front door, knocking and shouting.  A dazed Bear opens the door as Duck rushes in, exclaiming his boredom.  His desire to do something, actually anything, with Bear is the only thing on his mind.

Bear does not want to play cards, watch a movie, start a band, or make smoothies.  He wants to sleep.  He needs to sleep.  After receiving seven negative replies to his questions, Duck leaves slightly annoyed.  Bear, safely nestled in bed again, can feel sleep wrapping around him like a warm blanket.

What?! Who's that at his bedroom window?! What's Duck doing there?!  It seems his feathered friend has acquired a deep desire to whip up a batch of cookies.  As Duck quacks off a list of ingredients, Bear's series of "No." is getting more and more emphatic. This time he makes it clear to Duck

Sound asleep Bear is startled awake by a white wing tip tap, tap, tapping on his nose.  As you can well imagine Bear is not on his best behavior at this point.  A classic twist in the final pages will have readers chuckling.


Told entirely in dialog by the two characters Jory John reveals to readers his keen sense of humor.  Duck's persistence in the form of his queries, some normal, others outlandish, and Bear's consistent single word responses generate the perfect comedic contrast.  When Duck's initial parting sentence becomes Bear's frustrated, desperate pleas for peace and quiet, the laughter factor is elevated.  Here is another short sample.


Most readers are well aware of the look in Bear's eyes as shown on the front of the dust jacket.  The bewildered expression from lack of sleep is familiar.  I can hardly keep from bursting out laughing when I see the tiny pink bunny in his paw.  Duck is curiously peering around Bear giving us a little wave.  On the back of the dust jacket we see one of the interior illustrations of Duck strumming on a guitar, ready to start a band.

On the book case an orange on orange print provides the background for an image of Duck reading this book in his bed.  Bear on the left is in bed but still maintains the stare.  The blue shade from Bear's bedding is used on the opening and closing endpapers.  Benji Davies wastes not a single page beginning the story for readers on the title page.  Bear is seated in his chair, holding his bunny and yawning.  With a page turn the verso on the left and the dedication on the right show the Duck's and Bear's houses at night, a crescent moon hanging in the sky.

Using a limited color palette to great effect throughout, Davies only has three double page illustrations in the entire book.  The impact of each magnifies the moments in which they are used.  The remaining pictures are single pages, backgrounds shifting from Duck's house to Bear's house.

During the Q & A dialogue sections a series of smaller illustrations portray the text.  Davies' interpretation of this narrative adds to the hilarity; Duck carrying a bowl of popcorn, Duck covered in pink goo from a smoothie making gone wrong or Duck stretching out from behind the refrigerator door with butter in his wing.

It's fantastic the way a line or a dot made by Davies conveys an array of emotions on the characters' faces. Careful readers will notice the changes on the pink toy bunny too.  Three of my favorite illustrations are: a wordless visual of duck drinking a cup of coffee sitting on a stool next to his kitchen table reading 101 Ways To Stay Awake, Duck looking in Bear's bedroom window (on the second floor) just as he is drifting off to sleep for the second time and Duck's wing tip poking Bear's nose.  In the first one the stage is set for conflict.  In the second we know Duck's tenacity is going to make Bear crazy.  Bear's eyes and his pink toy bunny's eyes in the third, wide-eyed in disbelief, are sure to elicit giggles and grins.


I've said it before but it bears repeating, there is nothing better than shared laughter.  This title, Goodnight Already! written by Jory John with illustrations by Benji Davies, is sure to result in memorable humorous storytime sessions.  Be prepared to hear a chorus of "read it again."  This is one of those books with appeal across ages.  I am sure parents can readily identify with Bear.  Guys and gals will see themselves in Duck.

For more information about both Jory John and Benji Davies please follow the links embedded in their names to take you to their official online presence.  John Schumacher, teacher librarian extraordinaire, interviewed Benji Davies on his blog, Watch. Connect. Read.  Enjoy the extras below.