If you've ever worked with a group of younger gals and guys you are well aware of the power of suggestion.  I learned quicker than quick to ask them as soon as they arrived in my classroom, the school library, if anyone needed to use the bathroom.  Otherwise, when you are in the middle of a magical moment in a story, a wee little voice will call out, "I have to go to the bathroom."  This is immediately followed by a chorus of twenty other voices with an identical request. 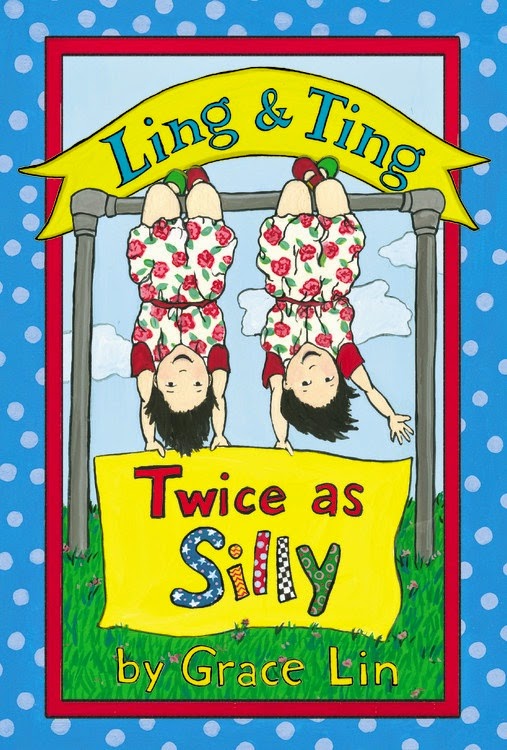 This enthusiastic openness can and usually works in wondrous other creative ways yielding to educational hours loaded with laughter and learning. Grace Lin, author illustrator of Newbery Honor book, Where the Mountain Meets the Moon and companion title, Starry River of the Sky, has written an uplifting, captivating early reader series beginning with Ling & Ting: Not Exactly the Same and Ling & Ting Share a Birthday.  The third title, Ling & Ting: Twice as Silly (Little, Brown and Company, November 11, 2014), is filled with joyful sharing between siblings.


Ting is in the garden.
"What are you doing?" Ling asks.
"I am planting cupcakes," Ting says.
"Ting!" Ling says. "You cannot plant cupcakes."

So begins the first of six stories, The Garden, Lucky Red Paint, On the Swings, Apples, Reading Minds and Not a Silly Story, where the sisters demonstrate their ability to charm readers with their literal wit. Ting proves Ling wrong by indeed planting cupcakes but despite all her weeding and watering no more cupcakes grow.  When Ling tells Ting beans are seeds, Ting's response will guarantee outbursts of giggles.

Ling is all set to paint everything red.  She leaves Ting to get more paint only to return with Ting vividly splattered from head to toe.  Her puny observation is a final stroke of genius.

In the third tale Ling's swinging skills are questioned by Ting.  No matter how high the object Ting proposes, Ling can conquer the height.   You will never guess how she is able to accomplish this daring deed.

Apples, monkeys, penguins, fish and worms circle back to the beginning as well as defining a new starting point for a fruitful treat.  In a test defying logic the sisters decide they must be the most special of twins.  When Ling and Ting set out to write a serious not silly story they simply cannot help themselves.  Every change to make it more interesting makes it...sillier than silly.


When it comes to this series written by Grace Lin words like bubbly and brilliant come to mind.  I have never met Grace Lin but the sincerity, kindness and happiness I see in her other work and in her online personality are highly evident in this title.  Grace Lin is a gifted storyteller no matter the length of her work.  She chooses her words with care; she studies pacing and presents readers with something they will long remember.  It's highly imaginative the way she takes elements from the first five stories incorporating them into the sixth.


You won't care about the goofy smile breaking across your face when you look at the bright primary colors spreading across the matching dust jacket and book case.  Ling and Ting hanging by their knees from a bar holding the title is a perfect example of how these two embrace life with a glass more than half full.  Grace Lin continues the polka dot design on her opening and closing endpapers using two paler shades of red.  Maintaining the playground theme, she has Ling and Ting bouncing on two rabbit toys on the title page and sliding down a slide to introduce the table of contents.

For each of the stories her illustrations are painted using Turner Design Gouache on Arches hot-pressed watercolor paper.  (Be sure to read the Artist's Note at the book's end.)  Pictures of different sizes are framed in one-quarter inch borders with colors that change with each story.  A full page image starts each tale.  The girls' clothing, their expressions (and those on the other characters), their body movements and their shoes make these visuals simply heartwarming.

One of my favorite pictures is of Ting and Ling in and near the garden described in the first story.  The text Story 1 appears stuck in the ground like a row marker above Ting digging in the dirt.  Garden tools are next to her.  Ling is watering the words The Garden formed with leaves and flowers.  A wheelbarrow, bag and shovel are beside her.  Both girls are smiling.


I actually laughed out loud more than once reading Ling & Ting: Twice as Silly written and illustrated by Grace Lin easily imaging being surrounded by giggling children if this were being read during storytime.  The same writing and illustrating that garnered the Theodore Seuss Geisel Honor award for the first title in 2011 is present in this book.  Make sure this is added to your early reader collection.

For more information about Grace Lin and her numerous books please follow the link embedded in her name to access her website.  Here is a link specific to this title. You can read several pages from the beginning of the book by going to the publisher's website.