I am a collector of words; not necessarily individual words but words put together in ways meaningful to me.  Collections of quotations hold space on my bookshelves.  In my dining room hangs a chalk board with a favorite saying welcoming guests into my home.

Either spoken or written my most cherished collections of words are stories, especially folklore. These tales were the first I heard and learned to read.  I haunt the 398.2 sections in libraries seeking out new narratives or derivatives on old ones.  One of the most enjoyed units working with students is the presentation and comparison of folktale and fairy tale variants.  It's fascinating to listen to the discussions of their viewpoints and to see them realize how each story is a reflection of the culture from which it comes. 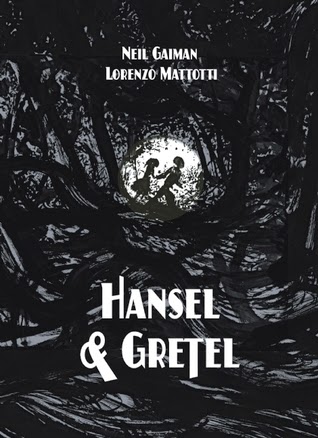 When I learned Neil Gaiman was writing Hansel & Gretel (A TOON GRAPHIC, October 28, 2014) with illustrations by Lorenzo Mattotti, I knew I not only had to read it but needed to own a copy.  First I read it quickly; then again more slowly marking specific sentences which wrapped me in the atmosphere of his telling.  I sought out other versions; locating my copies of Best-loved Folktales Of The World (Doubleday & Company, 1982) selected by Joanna Cole, Fairy Tales From The Brothers Grimm (Puffin, 2012) introduction by Cornelia Funke and Fairy Tales From The Brothers Grimm: A New English Version (Viking, 2012) by Philip Pullman.  For the third time I read Hansel & Gretel told by Neil Gaiman knowing I was reading pure magic.

This all happened a long time ago, in your grandmother's time, or in her grandfather's.  A long time ago.  Back then, we all lived on the edge of the great forest.

He then describes in detail, in a separate paragraph, the work involved in earning a living as a woodcutter.  When the woodcutter marries we are assured she does her best to support her husband.  When Gretel and then Hansel are born, we are told how they acquire their names.  Their daily childhood routine is laid before us as is the financial stability of the family.  Within these two pages Gaiman has acquainted us more intimately with these characters. We are bound to them.

Poverty strikes not only these four people but the entire land because of the ripple effect of war.  This we can understand through Gaiman's telling; history is replete with battles fought on every continent.  The true horror begins when Hansel overhears his parent's whispered conversation one night.  The suggestion his mother makes and the logic used to reach her conclusion go against most laws of nature.  The father perhaps exhausted by work and worry, hesitantly agrees.

Rather than leave their home in the dead of night Hansel, without telling his older sister, collects white stones in the morning.  She believes they are going to help their father, even though before they were told it was too dangerous.  When left by a fire for warmth, Hansel immediately tells Gretel the truth.  She denies his claims. Thankfully, as you all know, Hansel is able to lead them back home in the moonlight. The response of both parents is more vividly portrayed; again this is Gaiman tying us closer to the events and the people involved.

On their second journey into the woods things are changed; no warning is given, a river is crossed and Gretel is much wiser.  A more sensory element is added for their discovery of the witch's home.  An independence is assigned to the children; an extension from what we learned about them in the first several pages.

Emerging from her home to discover the children eating portions of it, the old woman is portrayed as kindly and sympathetic to the children's situation.  Double meanings, reading between the lines, are easily understood by the reader in a conversation about her eyesight and the lack of any meat in the meal on the table before them.

After the children are sleeping, the wily crone does take Hansel to a cage in a nearby stable and does chain Gretel to a table forcing her to slave about the one room cottage.  Neither child sees the other for weeks and weeks.  Gretel is frequently told of her plans for Hansel while promising to teach Gretel as if she were her daughter.

When the old woman's patience ends at Hansel failing to fatten (the clever boy using a bone instead of his finger to measure his weight) Gretel fires up the oven as instructed, tricking her captor into thinking she is witless and ending their imprisonment.  Upon Hansel's release by his sister and opening the oven to make sure the hag has not survived, they discover a gift which leads to riches.  Their trip home is successful and made happier by the welcome they receive from their father.  As the tale draws to a close Neil Gaiman includes more personal details about the father, mother and siblings making this version all the richer for readers.


The rendition of this story by Neil Gaiman is broader and deeper taking us into the darkest parts of people's hearts mirroring the forest in which they dwell.   Like all good stories it prompts thinking by the readers; the mother's logic and the father's horror at what is suggested but his completion of the abandonment of his children.  Why does only the father take them into the woods in this telling?  Why does only Hansel hear his parents talking?  Why does Gaiman choose to have both children unaware of the second journey?

Gaiman's decisions to include elements from the original story, leave out others and add his own signature spin are stunning; each choice intricately tied to another. The woman is the children's mother as written in the original not a stepmother, elevating the frightening turn of events for the brother and sister.  Gaiman mentioning the food was drugged when the children first arrive at the home in the forest adds to the sinister intentions of the old woman.  Leaving out the duck assisting them in crossing the river (lake) on their return maintains the resilience they learned from their father.  Here are some sample passages from this title.

The day waned and twilight fell, and the shadows crept out from beneath each tree and puddled and pooled until the world was one huge shadow.

They went so deep into the old forest that the sunlight was stained green by the leaves.  They pushed through brambles, and the thorns tugged at their clothes as if to say "Stay here! Stay here!
But they plunged deeper into the forest.

She dropped him onto the straw, for there was only straw on the floor, along with a few ancient and well-chewed bones, and she locked the cage, and she felt her way along the wall, back to her house.
"Meat," she said, happily.


We all know of the wickedness found in this story, the lack of light which dominates nearly every portion.  For this reason the illustrations of Lorenzo Mattotti, swirls of black and gray with only small holes of white, are exceptional.  The brush strokes, the play of lines from left to right and top to bottom, of his paintings rendered in India ink create an appropriately eerie atmosphere.  His use of shadows makes the story even more haunting.

All of the images span two pages.  It's the suggestions of things, rather than numerous details, prominent in each, relying on the minds of readers, which adds to their impact.  It's interesting to note Mattotti does include Gretel riding on a duck across the river with Hansel on the shore watching even though Gaiman does not include it in his telling.  What portions of the tale Mattotti selects to illustrate enhance every single moment.


For me this is the most accomplished writing of this Grimm story I have ever read.  Hansel & Gretel written by Neil Gaiman with illustrations by Lorenzo Mattotti is memorable, eloquent and truly frightening.  It maintains the classic structure of the original but gives it an immediacy not felt previously.

To learn more about Neil Gaiman and Lorenzo Mattotti please follow the links embedded in their names to access their websites.  There is a video at Lorenzo Mattotti's website explaining his illustrative work on this title.  It is in Italian but you can follow the main ideas.    This link to Toon Books includes a wonderful array of information including several pages for reading, a teacher's guide about Hansel & Gretel and several videos with Neil Gaiman.

This telling of Hansel & Gretel is so remarkable I am giving away four copies.  Two will be the deluxe edition signed by Neil Gaiman.  The others are the standard edition unsigned.