Twenty-six unique symbols with twenty-six individualistic sounds comprise our alphabet.  Twenty-six distinctive characters, either vowels or consonants, when combined make words.  A word or group of words strung together to form a sentence give us the opportunity to express ourselves in writing or through speech with extraordinary results. 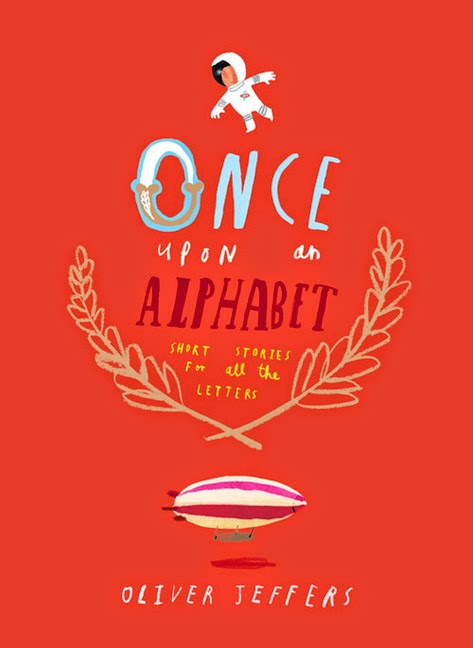 If these letters were given the chance to sit down and chat with us we might be treated to twenty-six exceptional yarns spun from centuries of experience.  Or perhaps they might chose to whisper in the ear of the talented Oliver Jeffers.  Once Upon An Alphabet: Short Stories For All The Letters (HarperCollins Children's Books, September 25, 2014 UK)  written and illustrated by Oliver Jeffers is a whimsical, original celebration of exactly what letters can and will do when placed in the hands of a master.

If words make up stories, and letters make up words, then stories are made of letters.
In this menagerie we have stories, made of words, made FOR all the LETTERS.

These stories for the letters use as many parts of speech as possible starting with the individual featured letter.  To begin we have an astronaut afraid of heights even though he has been training for ages for a particular adventure to acquaint himself with aliens.  There is a bridge burned by two not-buddies, a cup who crashes after leaving a cupboard and a delightful daring girl who dashes away on a donkey.

There might be elephants and an envelope, an unfortunate frog, a glacier guy, a woman who wishes she had used a hammer and a suspicious iceberg.  A thieving dog, dancing royalty, an electrifying woodsman and a mysterious microscope might have something to do with keys, cheese, light bulbs and shrinking.   Discovering what those elephants and envelopes and nuns have in common will drive you nuts...with laughter.

Teamwork finds resolutions, questions lead to more questions (a certain vegetable will never learn and it seems something is lost), and robots have resorted to robbery.  A previous dynamic duo averts a drowning but a tree-eating monster switches his favorite food.  Monkeys, a frustrated musician, a weird but effective giraffe, special glasses, a discarded toy and the return of the astronaut tie all the tales together.


The sentences and phrases used for each letter number as high as eleven and as low as two.  Sometimes Oliver Jeffers uses succinct thoughts, short, to convey exactly what he wants readers to know.  Other times alliterative descriptions boggle your mind at their ingenuity.  More than once he uses a combination of rhyming words to depict his story.  Additions of conversations between characters and narrator asides increase the humor.  Before a story begins one page is devoted to a brief introduction.  As each letter's words are read you can't help but be amazed how Jeffers connects one to another.  Here is a sample letter.

I
The INVENTOR
There once lived an ingenious
inventor who invented many
ingenious things.
His latest invention allowed
him to observe iguanas in their
natural habitat...
...incognito.

(Two iguanas talking)
Is that an iceberg?
I've no idea


The electric red dust jacket shouts out, "Hey readers!  Look at me!"  Oliver Jeffers includes the astronaut and the Zeppelin, the beginning and the end, on the front.  On the back of the jacket the alphabet is listed in rows in a darker shade of red.  O, R, S, T and Y are in white arranged to flow spelling story.  Embossed in the book case, which is the darker red shade, are eight rows of the letters of the alphabet in the jacket color.  Spread across the white opening endpapers are the capital letters of the alphabet again in the jacket red.  Small elements from the twenty-six stories are cleverly pictured on the closing endpapers.  The title page combines letters from the front and back of the dust jacket.

Each introductory page includes the heading, a large capital letter and a small significant visual.  Jeffers illustrations range from double page to single page to smaller insets.  Every detail is important; the text never says it but Danger Delilah is juggling daggers and naturally there is a fly zipping around from page to page near the frog,   You never know when something from one letter will appear with another regardless of the text; the ladder sticking out of a hole in the background for the letter L comes in mighty handy during the letter U story.  Many details from the O story reappear in this title or have appeared in another book entirely.  Jeffers artwork is playfully marvelous.

One of my favorite illustrations is a smaller one at the close of the L story.  The lumberjack who has been struck by lightning repeatedly is sitting up in his bed reading.  He is holding a glowing light bulb in his hand.  It looks as though there are bears on his pajamas.  The book he is reading is titled Once Upon An Alphabet.  The entire image is done in black and white.


Once Upon An Alphabet:  Short Stories For All The Letters written and illustrated by Oliver Jeffers is a rich and rare alphabet book.  As soon as you close the back cover I'm certain you'll open up the front and read it all over again not once but many more times.  I would plan on having more than one copy available to your readers.

To learn more about Oliver Jeffers please follow the link embedded in his name to his website.  This link takes you to an interview at NPR All Things Considered.  Oliver Jeffers talks about this book and reads several of the stories aloud.
Posted by Xena's Mom at 7:56 PM