Have you ever had a carton of milk or jug of orange juice in your hand while opening the door on a cupboard or microwave?  You're distracted to the point you're not thinking about what should go where.  Have you ever opened the door on your refrigerator expecting to find some delicious snack, only to discover it has disappeared?  You're positive you purchased it.  You're positive you couldn't have eaten it already.  Immediately you might think as was commonly heard around the house when I was growing up, "The ghost must have done it." 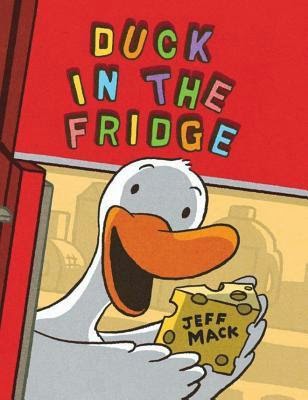 In my wildest dreams I've never opened anything inside my home expecting to find something alive.  (I did open a bathroom vanity one time to find a mouse waving at me, but that's another tale for another time.)  Those beings are much better at existing in the outside world.  For this reason Duck In The Fridge (Two Lions, September 2, 2014) written and illustrated by Jeff Mack is hilarious before you've even read the story.

As a dad sits down next to his son's bed to begin reading a bedtime story, a question prompts an unexpected reply.  The boy wants to know why his dad always reads Mother Goose.  The boy is beside himself with excitement when his dad answers,

...IT ALL STARTED WHEN I FOUND A DUCK IN THE FRIDGE.

Yes!  You read that right.  When he is a tad older than his son's age he finds a real live web-footed, orange-billed, white-feathered quacker in the kitchen appliance.

That's not the only place there are ducks either.  They make getting ready for bed nearly impossible. Sleep is entirely out of the question.  Crackers barely curb their hunger.  They, the ducks, decide to order pizza.

The boy's dad makes a phone call for help.  His request for something very scary ends up with two very hairy items prone to baaing a great deal and watching television.  His bigger, better, scarier plea prompts the delivery of not one, not two but three dogs.  Now his home is filled with ducks, sheep and canines who love card games.

At his wit's end one more phone call supplies him with a humongous box on his doorstep.  A wild rip-roaring party ensues.  When a duck, wearing an unusual hat, proclaims his lack of reading skills, the boy's dad, a very smart guy for his young age, has an idea.


Every reader will be laughing by page two at the absurd turns in this tale spun by Jeff Mack.  The puns and jokes spoken by the animals are so goofy you'll be groaning but grinning at the same time.  Mack skillfully mixes the dad's narration with comments and conversations added in speech bubbles.  Having pizza as the food of choice will be readily understood by readers.  Here is a sample passage.

I gave the ducks some crackers,
but they ate them all.
Then they ordered out for pizza.

WHO'S GOING
TO PAY FOR
ALL OF THIS?

JUST PUT IT ON MY BILL.


Look at the illustration on the matching dust jacket and book case spreading across the back to front!  All the red with the other bright cheerful colors, not to mention the expression on the duck's face contrasted by the look of total shock worn by the boy, will draw readers to the book immediately.  (I love the red refrigerator.) In two shades of golden yellow Jeff Mack has drawn the interior shelves of a refrigerator loaded with food for both sets of endpapers.  A turn of page takes readers to the verso and title page beginning the story with the boy jumping into his bed, stuffed duck toy following behind, as his father calls out to him.

Cartoon-like illustrations rendered digitally by Jeff Mack show a full range of facial emotions, some zooming in closer than others.  Mack chooses to vary his illustration sizes, double or single page edge to edge, or a single page with a liberal use of white space.  His large illustrations with all the animals are flawless creative chaos.  You could look for hours at all the details...and pieces of pizza.

One of my favorite illustrations of several is at the beginning.  The boy (the child's dad when younger) is lying in bed grasping the covers up to his mouth which is open wide.  Behind his glasses his eyes are expressing complete disbelief.  Next to him under the covers is a duck wearing one of his tube socks as a hat saying...

Off to the side of the scene in the lower right-hand corner is a portion of a Mother Goose book.


Sure to be a bedtime favorite with many requests for repeated readings but good anytime if you want to hear peals of laughter, Duck In The Fridge written and illustrated by Jeff Mack is the book you need.  I recommend you read with many voices full of expression to match the spirited words and pictures.  The twist at the end is absolutely perfect.

For more information about Jeff Mack and his work please follow the link to his website embedded in his name.  To learn more about this title and his process follow this link to an interview at This Kid Reviews Books.  John Schumacher, teacher librarian extraordinaire, interviewed Jeff Mack on his blog Watch. Connect. Read. in 2012.
Posted by Xena's Mom at 6:35 PM