Two weeks ago when heading home through town down several side streets, I couldn't believe my eyes.  One of the houses looked like Clark Griswold had paid a visit; lights twinkling in the early dusk.  Not too many days later wreaths and garlands began to appear outside markets and nurseries. Members of the high school band were canvasing neighborhoods selling seasonal greens to raise money. 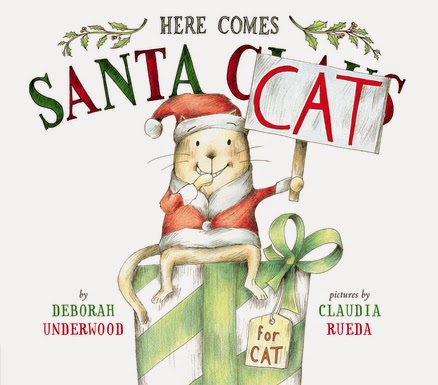 Perhaps the early snow storms contributed to the air of preparation and expectation but there is no doubt, the season of winter holidays is upon us.  Children throughout the world, depending on their cultural customs await the arrival of a special night, a night of gift-giving.  You may recall there is a rather cunning cat we first met in Here Comes The Easter Cat (Dial Books for Young Readers, January 24, 2014).  For reasons soon to be revealed he has returned in Here Comes Santa Cat (Dial Books for Young Readers, October 21, 2014) written by Deborah Underwood with pictures by Claudia Rueda.

Hey, Santa!
Have you seen Cat?

Readers, unlike the unseen narrator, are quick to recognize Cat dressed in Santa garb.  When the unidentified voice realizes their mistake, they ask Cat why he is wearing a suit of red trimmed in white fur.  Through the use of his clever mode of communication we decipher the true reason for Cat looking like Santa Claus.  He wants to give himself a gift.

He is secure in his assessment the real Santa Claus will not be giving him a gift.  On the naughty or nice pie chart, his nice section is a mere sliver.  Cat has no other option.

In further conversation, it's clear his role as the jolly giver of gifts has not been carefully considered.  Climbing down chimneys is too messy.  Not being in possession of flying reindeer, Cat decides to wear a device of his own choosing with disastrous results. (He does have a love of speedy means of transportation.)

He could simply be nicer even if there are less than twenty-four hours left.  His ideas of caroling, giving presents to children and decorating the tree in the town center are fabulous failures. Regardless of his less than stellar attempts, the narrator decides to give him two cans of his favorite fancy food.

Now a new problem presents itself to Cat in the form of a younger character.  Cat has a choice to make.  It's not going to be an easy decision because Cat is.... Well he's Cat.

Look what's happened to Cat now.  Merry Christmas to you too.


Continuing with the narrative technique which worked extremely well in the first title, Deborah Underwood uses a conversation between Cat, displayed through the use of signs, with an as yet unnamed speaker.  This voice questions, discusses, reasons, advises, responds and supports Cat in all things.  It's the actions of Cat, devised by Underwood, which will have listeners rolling on the floor with laughter and readers giggling with glee.  Cat's personality is distinctively his own.


Claudia Rueda has rendered all the illustrations

with ink and color pencils on white paper, surrounded by hundreds of cats (ink cats!).

White space is definitely an element in all her visuals beginning with the matching dust jacket and book case.  The look on Cat's face sitting on top of the gift holding up the sign covering Claus makes me laugh every single time.  On the left the expression on his face sans the suit (the hat is behind his back) is without a doubt devious.  Rueda begins her visual story several pages before the formal title page with Cat wandering by a pet store displaying a bounty of items.  By the time he passes the shop he has a plan.

In a pattern which splendidly dictates the pacing, adding to the humor of the story, Rueda alternates with an illustration on one page with the black text spoken by the narrator on the opposite side.  On several pages pictures alone carry the story line seamlessly.  Her artistic technique and style convey every single nuance of Cat's moods.

With a soft touch to her color and lines and with the smallest of details, the mere hint of a smile with his paw resting on his lips, a toothy grin, a frown with upraised eyebrows, or crinkled whiskers, we know what Cat is thinking and feeling.  Her use of shading depicts Cat's change from being downcast to expressing alarm and then hopeful.  Selecting a favorite illustration is nearly impossible.

I think one of my favorite funny pictures is after the big CRASH!  Cat is standing wearing the Santa hat and coat with a string of Christmas lights wrapped around him from head to paw.  On the opposite side is a single word spoken by the narrator.

For me the "heart" factor comes with the illustration featuring Cat wearing his new set of clothes having just given a gift to his unexpected visitor.  After the gift is opened I can already hear readers sighing.


Who doesn't love to laugh? We need it every day.  The effect is immediate and beneficial.  Here Comes Santa Cat written by Deborah Underwood with pictures by Claudia Rueda is one of those seasonal books certain to lift spirits not only for the wit but for the wisdom Cat discovers.  I am grateful to Deborah Underwood and Claudia for creating this series.  (I'm still smiling after numerous readings.)

To learn more about Deborah Underwood and Claudia Rueda please visit their websites by following the links embedded in their names.  Deborah Underwood was a guest blogger at PiBoIdMo, Picture Book Idea Month, hosted by Tara Lazar on November 17, 2014.  She talks about the creation of Cat and the first book.