If you choose to think about it in this way our lives can be measured by the time we spend waiting.  When younger we can't wait until we are grown up; only to wish we could turn the clock back every so often.  We wait to hear our name called to make the walk in front of classmates, friends and family to receive our high school, then college diploma. We anxiously await news about our first job. 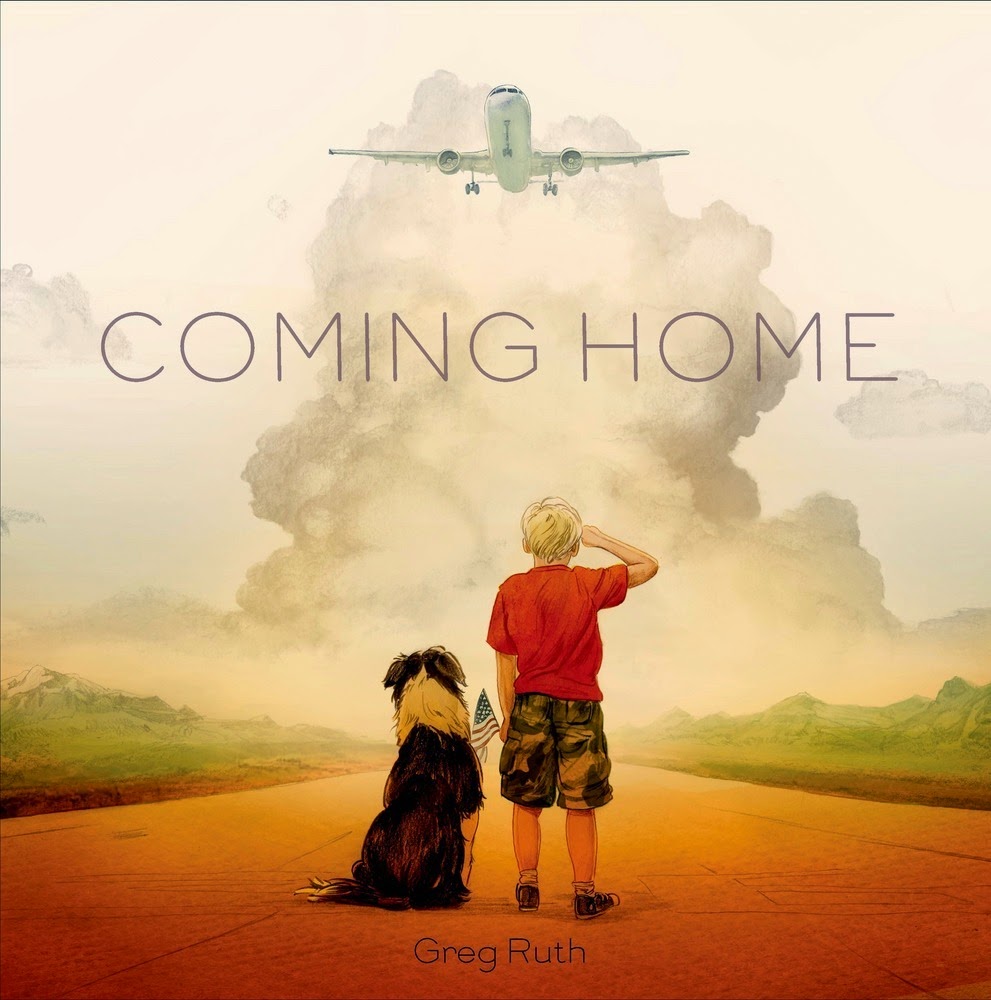 One of the most highly-charged times of waiting is for the return of loved ones.  A hole in the fabric of lives is plainly felt by their absence.  Coming Home (Feiwel and Friends, an imprint of Macmillan, November 4, 2014) written and illustrated by Greg Ruth vividly portrays the arrival of soldiers.

This word is the first of only eighteen words in this story.  Each illustration offers an explanation or an extension of the text.  The initial visual of fourteen double-page pictures accompanying this single word shows two rows of people waiting behind a roped-off area.

Eight people and a dog are more prominently featured.  It is the boy in the red shirt off to the side that draws our attention.  He, the dog and another woman are intensely focused on a plane, steps lowered, which has landed.

A signal is given.  The boy and the dog on a leash held by the woman race out the doors onto the tarmac.  The dog jumps on a kneeling female soldier as the boy walks away.  He runs again searching and watching as others greet one another; hugs shared, kisses given and pictures taken.

He wanders among all the people. He looks in every direction filled with hope.  A soldier stands alone with a duffel bag at their feet.  The boy stands alone perfectly still staring ahead.  He suddenly yells with hands upraised, joy spread across his face.  A hero has returned.

Until the final page only one or two words have been selected for use by Greg Ruth on some of the pages.  Each choice not only builds anticipation but offers the boy's response to observations made as he seeks his parent.  We can also sense his increased frustration making the eventual reunion all the more joyful.  Bracketing specific words with repeated words and phrases mirrors the pace of the boy walking and pausing.

When opening the dust jacket Greg Ruth gives readers a before and after glimpse into the reality for those left at home with loved ones in the armed services.  A boy and a dog stand on the airstrip watching a plane fly overhead each waiting respectfully.  On the left or back the airstrip is extended with the landed plane across its surface.  Passengers are embarking.  The tiny figure of the boy and his parent can be seen.  On the book case Ruth has placed the image from the book's interior when the boy and his parent first see one another.  A pale yellow color apparent in all of the illustrations covers the opening and closing endpapers.

Each page turn reveals gorgeous images brimming with motion and emotion.  Body postures and facial expressions express more than words could convey.  Each and every reader can connect to the feeling of meeting someone who has been absent; someone whose presence makes your life richer.

Ruth's technique of having elements in the illustrations appear more faded in the background drawing your attention to those in full color is beautiful.  As you focus on the dog jumping on the soldier, the woman kissing the male soldier's nose, the man touching the pregnant woman's stomach, or the child wearing a male soldier's cap you understand completely the exchange taking place in those moments. One of my favorite images uses these techniques to great effect.

Greg Ruth shifts his perspective zooming in on the boy peering between two separate groups of people.  We still have the more faded people in the background.  In the foreground the people are much darker in shades of brown and black drawing our eyes immediately to the boy.  His look of inquiry might be tinged with increased hope.  You can't really know until you turn the page.

Coming Home written and illustrated by Greg Ruth needs to find a place on every bookshelf.  Its portrayal of the arrival of returning soldiers home to friends and family of all ages is striking in its truth.  This is an important and moving book; a homage to those who serve and those who await their homecoming.  An Author's Note concludes the book.

To learn more about Greg Ruth and his other work, please visit his website by following the link embedded in his name.  On November 10, 2014 Greg Ruth was a guest blogger at teacher librarian extraordinaire, John Schumacher's site, Watch. Connect. Read.   He speaks about this book and several illustrations are posted.
Posted by Xena's Mom at 7:07 PM